So while this post has pretty much nothing to do with the natural world, I can’t really do a post like the last one and not follow up. Especially when it affords a final opportunity of the season to brag about race results.

First off, the feed-bag hand-offs went perfectly. “Jason”- who in his 3rd year is a seasoned hand-off veteran- performed flawlessly in what is the most dangerous part of LOTOJA.

Tangent: My wife, who was a spectator at the last feed zone in Alpine, WY, saw a hand-off go awry when a Cat 1/2 rider went down and broke his hand.

Another-Great-Wife-Tangent: My wife, who as I’ve previously mentioned, makes all sorts of great observations about bike racing, characterized LOTOJA as “1,000 skinny angry white men”, which I am embarrassed to admit is pretty much spot on. 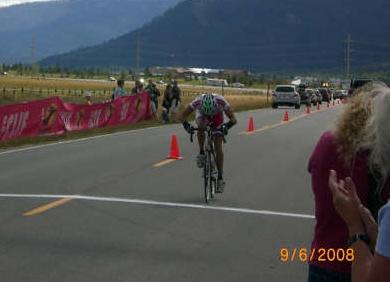 Second, I did phenomenally well. My time was 9:14:32, a 23 minute improvement over my last year’s time, an astounding 9th place overall- not just in my category, but overall, out of >1,000 racers- and only 13 seconds behind the overall LOTOJA winner. Amazingly, when my teammates and I were emailing back and forth a couple weeks back about goals for the race, I stated my #1 goal as finishing under 9:15. I made it by 28 seconds.

The race was remarkable in a few ways, not least because the top 12 finishers in my pack all finished several minutes ahead of the Cat1/2/Pro leaders. The reason was the team. Of the final pack of 9 I worked with (yes, they spat me out the back in the last km) 6 of us were teammates. Until the last km we worked as a team and supported each other for a common time goal.

Tangent: Years back, when I was exclusively a mtn biker, my friend Paul told me how he’d some done road-racing years ago, and that the best part of the experience was the team, and how the teammates supported and worked and sacrificed for each other. At the time I sort of pooh-poohed it, thinking roadies to be snotty, Audi-driving, uptight, skinny angry guys of questionable masculinity (what with the leg-shaving and all.) Years later, I get it. Paul, you were right on.

Friday night before the race Jason and I stayed, as we did the previous 2 years, at the Wellsville home of his best friend from high school. His friend, wife and 4 kids are a great, welcoming family, but they’re super-LDS. Which means it’s not the kind of house where you drink coffee. So every year, the morning of the race, I wake up at 4:50AM and sit out on the front step in the pitch-dark, looking at the stars, drinking a mug of instant coffee and eating a microwaved egg & cheese burrito.

The year, Jason sat out on the step with me, and as I sipped coffee and looked up at the Pleiades, he told me the story of his dog. This past summer, while his wife was visiting family in Japan, Jason put down his dog. The dog was 15 years old and took nearly a minute to stand in the morning. Jason took the dog to the vet, and after examining the dog, the vet gently recommended ending his life.

Awesome-Double-Tangent-I-Had-to-Edit-Out: So this part of the post had like my Best Tangent Ever, that had this great tie-in to the Japanese WWII holdouts referenced in the last post. But this morning a reader (yes, apparently someone besides my brother actually reads this blog) contacted me in a panic and begged me to take it out, because the tangent contained a disclosure that he/she doesn’t want another reader (yeah, that’s right- TWO people besides “Phil” read this blog. Can you believe it? I’m like Jason Mulgrew now!) to know about.

About 9 hours later that same day, I was working with an (almost final) pack of about 13 riders in Snake Creek Canyon, about 175 miles into the race, in a fast double pace line. I was trashed, cooked, bonked. I was starting to gap in the pace line, and I thought for a span of 10 or 15 minutes that it was all over. At one point I fell out of the pace line, and my teammate, let's call him "Ken", passed me, patted me on the back and said, “Hang in there, [MY NAME]”, in a kind but resigned tone that you might use with… your old dog that you were about to put down. 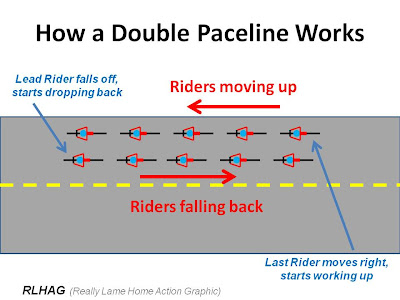 In an instant my mind flashed back to the inky black sky of 5AM and the Pleaides above and the rooster cries of that morning (Wellsville is pretty rural) and I thought, “No. Not yet. I may be 44, but I am not that old dog. Not today, not here, not this race. I am not getting put down today.” And over the next few minutes I rallied, worked my way back in to the pace line, pulling my share and working with my teammates till the end.

I crossed the finish line alone, about 6 seconds behind the previous rider. Only a handful had crossed the line before me, and the applause and cheering was louder than I’d ever heard at a race finish, and at that moment it was all for me. All in all, a great day for a middle-aged dog.