About a month ago, I blogged about the first wildflower in the Wasatch foothills, Crane’s Bill. For the past couple of weeks, there’s been another little flower out, and unlike E. cicutarium, this one’s native.

Yes, this is a geeky-botany post, but even if you’re not that into plants, if you mtn bike, hike or trail-run in the Wasatch foothills, this is a good flower to know because a) It’s all over the place, b) it’s easy to ID and c) it has an unusual & cool characteristic that’ll be interesting to watch over the next couple of months*.

*and d) you’ll totally impress your biking/hiking friends, who will think you are like Mr. Science. Or you might just drive them batty with all your geeky botany factoids, which is what I have long since done with all my biking friends. But even more annoying was back in 2001-2002 when I was learning Spanish and whatever they asked me during a ride I answered in Spanish. That totally drove them shithouse. Sometimes I wonder why I don’t have more friends…

Despite all this, the flower, Long-Stalk Spring Parsley, Cymopterus longipes, isn’t in any of my wildflower guides (probably because it’s so diminutive that it’s easily overlooked) and because of this it remained a mystery for me until Sally – with the help of her friends “The Chemist” and “The Collector”- was kind enough to ID it for me.

Tangent: Sally, like me, often uses pseudonyms for friends she references in her (excellent) blog. I always get a kick out of Sally’s pseudonyms because they usually sound sort of like superhero-crimefighter names*. “The Chemist”, “The Collector”, and “Bee Lady” sound a bit like something out of an X-Men sequel, and when she mentions them in a post, I always get this mental image of a bunch of costumed characters discussing botany or entomology or whatever together for a bit, before jumping up and going off to fight crime.

*This is in stark contrast to the pseudonyms I select, which generally sound either like rappers (OC Rick, Clean Colin) or back-up singers for The Carpenters (Rainbow-Spirit-Paul, Aurora Coryalis.) 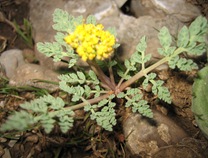 Long-stalk Spring Parsley, and Spring Parsleys in general (genus = Cymopterus) are easy to overlook because they’re so tiny, but when you get down and check them out up close, you can see that they have a flower-head structure that’s similar to other flowers you’ve probably seen, such as Cow Parsnip or Queen Anne’s Lace. Like those flowers Spring Parsley is part of the Apiaceae family, which includes carrots, celery, and several of the items in your spice cabinet, including cumin, cilantro, dill and caraway.

All of these plants have flowers with what’s called compound umbel structure, which is sort of like a series of successive umbrellas, ending in a bunch of little florets. LS Spring Parsley is so small it’s hard to see the floral structure, but if you examine it closely enough, sure enough that’s how it’s set up. 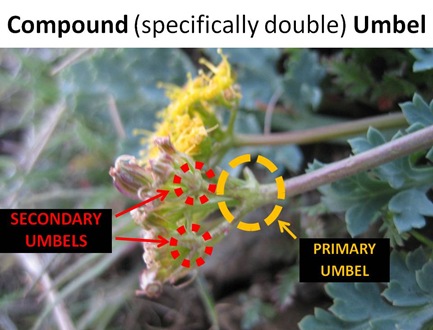 Many Apiaceae plants are toxic. Last summer I blogged about the phytophotodermatitic sap of Cow Parsnip, but that’s kid’s stuff; the family also includes Water Hemlock (genus = Cicuta) which is quite possibly North America’s most toxic plant. The active poison in Water Hemlock is cicutoxin, which is actually an alcohol.

Geeky Chemistry Tangent: When we think of alcohol, we generally think of the stuff we drink. That’s actually ethanol*, which is a specific alcohol molecule, C2H5OH (diagram right).

*Speaking of the alcohol we drink, check out the impressive, livin’-off-the-land Prickly-Pear Cocktail Sally whipped up last week. I swear, this lady would make Euell Gibbons proud. Or drunk.

Cicutoxin, C17H22O2, is an alcohol you would never ever want to drink. It causes a swift and violent disruption of the entire central nervous system, leading to tremors, seizure and often death. Victims are rumored to have chewed their own tongues to shreds.

There are 4(?) species of Water Hemlock, 2 of which are found in Utah: Western Water Hemlock, C. douglasii (pic left), and Spotted Water Hemlock, C. maculata (pic right). Both have large, white, compound umbel flowers, usually stand between 2 and 5 feet high, and occur along watercourses. They look not unlike Cow Parsnip, but lack that species’ broad leaves, instead having pinnately-compound leaves, each with lots of little pointy leaflets.

Apiaceae includes many edible and medicinal plants, but due to problem-children like the various Cicutas, botanist-writer Thomas Elpel * says, “these plants are for experts only.” Most accidents happen when they are confused with wild parsnips (the two plants have similar, white tuberous roots.)

*And coming from Thomas, this is saying something. His excellent book, “Botany In A Day”, includes pointers to literally hundreds of wild edible and medicines- everything from wildflower roots to Engelmann Spruce seeds. I swear, this guy could make a 4-course dinner out of grass clippings…

So where was I? Right, LS Spring Parsley. Fortunately this thing’s so tiny there’s not much temptation to try eating it, but experiments feeding the seeds to baby chicks resulted in dramatically retarded growth and development, and even death in one case. The active compounds in this case are isoimperatorin (C16H14O4), and oxypeucedanin (C16H14O5), but I can’t find any evidence that these are harmful to humans in anything less than huge quantities, and in fact both are present in culinary Parsley. 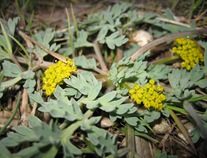 It’s not quite clear what pollinates these little flowers. Likely candidates include solitary bees (specifically Halictidae), syrphid flies (hoverflies) and muscid flies. (This last group is houseflies and stableflies, and includes the Common Housefly, Musca domestica.) Unfortunately I’ve been seeing these guys almost exclusively on pre-work AM rides, when the temps are sub-40F, and no insects of any kind are out and about yet. Maybe this weekend if the weather shapes up I’ll see if I can work in an afternoon ride with a ~20 minute stop-and-watch break by a clump, and see what shows up.

We’re Getting To The Cool Part

But none of that is the cool part about LS Spring Parsley. No, the cool part is how it grows, and how it will change over the next 60 days or so.

C. longipes leafs out and blooms in late March, and it does so lying flat, leaves splayed out along the ground. But as the Spring progresses, the entire plant- leaves, flowers and all- will gradually rise up off the ground as a single unit, almost like it’s on a slow-motion elevator, until it reaches a height of up to 10 cm off the ground. 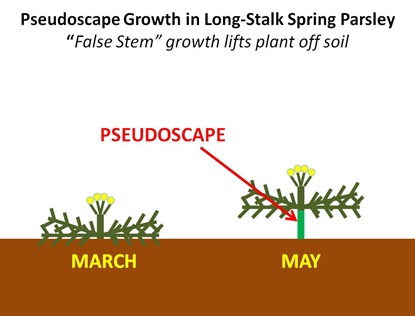 As the Spring progresses, the ground gets warmer and warmer during the day. By the end of this month or early May, the daytime soil temps on South-facing hillsides around here will be well above the optimal photosynthetic temperature for the plant, resulting in decreased photosynthesis and less-efficient water usage. So the plant gradually raise up off the ground to optimize photosynthetic temperature. An in fact this “uplift” will be more noticeable with C. longipes on sunny, South-facing slopes, than for those in shadier, less-exposed spots.

But wait, wait! That’s still not the cool part- I’m still just setting up background and building the suspense! No, the cool part about the gradual Spring ascent of C. longipes is how it does it. It grows an anatomically unusual feature called a pseudoscape, or “false stem”. 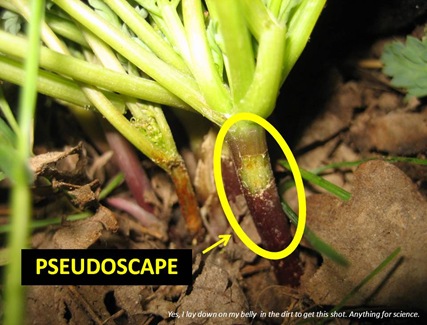 A true stem grows up and branches into various new growths- flowers, branches, leaves, cones, etc. A false stem doesn’t do this. Instead, the section of tissue between the ground and the existing leaf/stem/flower structure begins to grow and extend, lifting up the entire, already-developed leaf/stem/flower structure. So unlike a “normal” plant, where a stem pops up and then grows and branches into an “adult” plant structure, LS Spring Parsley does just the opposite: The adult plant grows and blooms on the ground, then the pseudoscape starts growing, raising the structure up to optimal height.

Side Note: Other Cymopterus species also grow pseudoscpaes, but none so pronounced or well-developed as C. longipes. 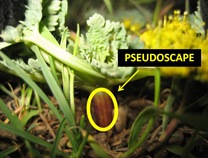 Of course over the next couple of months all kinds of crazy things will be growing and blooming, and LS Spring Parsley will tend to get lost/buried in the grass & shrub jungle of the Springtime foothills. So try to make a point, while things are still largely low and mellow, of noting a clump of the plant now while it’s easy to spot (preferably in a sunny location), along some trail you’ll bike, run or hike often as the season progresses, and then make a mental note to keep an eye on it in the coming weeks and watch what happens.

I’d like LS Spring Parsley even if I didn’t know a thing about it, if just for that long-awaited first spot of color it provides. But I also like it because it’s a great little showcase that almost any little plant, once you check it out and learn a little bit about it, has got some cool story to tell.

Nice job! Your posts are always so educational... We just don't have this little guy over here; thanks for the introduction.