Saturday, Awesome Wife and I went up to Park City- sans offspring- for an overnighter to celebrate our anniversary.

Tangent: I have the coolest wife. If you knew my wife, you would immediately think 2 things: 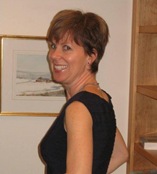 1- “Oh man, I wish I had a cool wife like that plant-blogger guy. She is so way awesome!”

2- “How on Earth did a goofy guy like the Watcher get such a cool wife?”

The short answer to #2 is that I’ve spent almost my entire career in sales, and during that time have closed hundreds of deals, but only 1 of them really mattered.

Nested Tangent: While I’m a) on the topic and b) feeling a bit sentimental and preachy, I’ll follow up with 2 pieces of marital advice that sound way obvious, but which I’m continually amazed that so many people (both men and women) I know don’t seem to get:

1- Regularly compliment your spouse. Tell them they look great. When they do something great, tell them how great you think it is, whether it’s project around the house, solving a problem with a kid/neighbor/in-law, doing well in a race, a professional/ academic achievement, narrowly evading a car accident or cooking a great meal or whatever.

2- Always be on their side. If they tell you about a dispute at work or PTA or with friends or at Relief Society or the Board of Equalization hearing or whatever, they’re always in the right. It doesn’t matter if they screwed up or are being totally unreasonable- you’re on their side. Don’t be like Judge Judy or Dr. Phil; be like the best race-teammate ever. 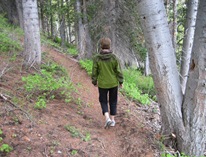 Anyway we had a great time. Though the weather was problematic, we took advantage of a short break in the storms to do a nice little hike up toward Guardsman Pass, right at around 9,000 feet.

Side Note for UT Mtn Bikers: We hiked part of TG and the Guardsman-TG connector. Both were about 95% clear/ride-able, and expect they’ll be fully ride-able by this coming weekend.

The trails we hike had just barely melted out, and though the Aspens were leaved, the surrounding earth had only minimal green cover. This is a stage when I’m typically not on the trail this high- I usually wait a week or so more till things dry out a bit- and it was interesting to see what’s going on up there right now. 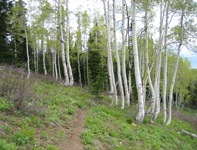 The ground is almost a “compressed pavement” of soil and dead leaves from the previous Fall. Looking at how firmly the dead Aspen leave are impacted into the soil, you can almost feel the weight of the recent snowpack. In fact I suspect that the soil itself is probably “re-bounding” a bit from the relatively sudden release of weight, and I wouldn’t be surprised if the ground actually rose an inch or so in the coming weeks.

Tangent: Don’t laugh; this really happens. A much larger-scale example is Northern Quebec, where the ground is still rising after being relieved of the weight of Ice Age glaciers*. There’s even a name for this type of action: Postglacial Rebound.

*Northern Quebec had a large, isolated remnant ice-sheet that lingered until only 6,000 – 7,000 years ago.

The whole topic of postglacial rebound is fascinating, particularly as it relates to global warming and rising sea levels. In areas where substantial rebound is still occurring (much of Nunavut, for example) it’s thought that such rebound will help to protect coastlines by offsetting predicted rises in sea level. But in other areas, such as the East side of Baffin Island, the rebound has pretty much played out, and so its coastline is considered threatened.

What’s really cool about this “pavement” (pic left) is that as the ground dries out and (I presume) the soil rebounds, cracks are developing, and it seems to be these cracks from which the first green shoots are emerging.*

*The shoots are doubtless forcing the cracks as well, so I imagine it’s a positive feedback type of thing…

The whole vibe of the forest is of a much earlier time in the year, reminiscent of the last weeks of March in the foothills, when the first spots of green were appearing. And it’s a good reminder of how, if you live near mountains, you can take advantage of different elevations to “stretch out” your experience of Spring.

On our entire hike, we saw just 2 flowers. The first is our old friend, Ballhead Waterleaf (pic right). We’ve seen this guy down at 5,000 feet in Dry Creek back in April, then up at 7,000 feet in early May, and now it’s an early pioneer up here at 9,000 feet. What a cool, versatile plant. I’ve grown to see this unassuming little flower as somewhat of an old friend in the Wasatch.

The other flower we saw was a newbie, and completely unlike anything we’ve seen lower down. 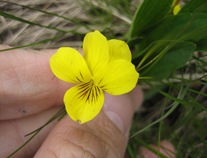 It’s a Mountain Violet, Viola purpurea. At least 3 violets occur in Utah. Mountain Violet and the similar-but-larger Nutall’s Violet are yellow, the Blue Violet, Viola adunca, is uh, violet. Almost all violets are low-to-the-ground and herbaceous (no woody parts, stems, die off in the Fall.) The flowers are always 5-petaled and zygomorphic, meaning that they can be divided into symmetric halves only along a single axis, unlike say a Dandelion or a Lily, which can be halved symmetrically any which-way. The flower has clear pollinator-“guidelines”, similar to those we looked at yesterday on the Sticky Geranium, but mostly along the bottom, tongue-like petal, sort of like runway lights at an airport. 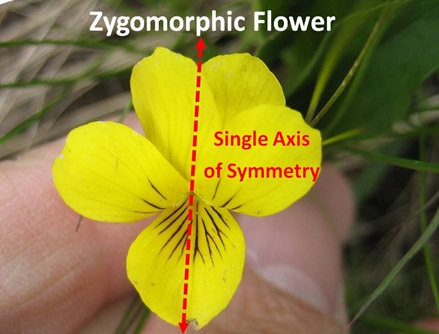 Viola is a worldwide genus with over 500 species, and it’s a way diverse, complicated genus that’s been the subject of extensive study. Not only are there all kinds of polyploid species, but the base haploid chromosome number ranges anywhere from n=4 to 17. Our Mountain Violet (n=6) is considered one of the more “primitive” North American species, meaning that it’s thought to be more similar to the supposed common violet ancestor species* than most other nearby species.

*Thought to have lived down in the Andes, and have had n=6.

Side Note: African Violets by the way are not violets, but one of several species of Saintpaulia, a genus native to East Africa that is only remotely related to true violets (completely different orders.) Garden Pansies are violets, but are cultivars of 3 different violet species. 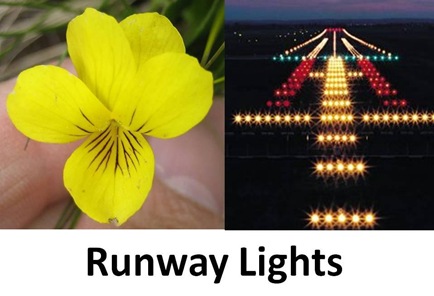 A weird factoid I read about violets- but haven’t yet tested- has to do with their scent. A key component of the flower’s scent is a compound called ionone (C13H20O), and in fact it, and the closely related methyl ionones, have been used extensively in perfumes for about a century. But the weird thing is that supposedly ionone temporarily desensitizes the receptors in your olfactory epithelium (see this post for explanation of how smell works) so that the smell of a violet weakens after the first sniff. So you can sniff and sniff, but you never smell it any better… This factoid is worthy of not just 1- but 2 tangents.

Tangent #1: I’ve long noticed that Columbines are only good for a couple of sniffs before the smell fades (which I noted in a comment to this post on KB’s blog.) I always assumed it was because the scent was somehow “used up” after a couple of sniffs. But now I wonder if some ionone-style mechanism is at work. On the other hand, I seem to get the smell again as soon as I switch flowers, so maybe not… OK this tangent isn’t going anywhere, let’s move on to the next one…

Tangent #2: OK, I know these chemistry tangents are way geeky and boring for most readers, but pay attention for a minute: have you noticed that almost anytime I give a chemical formula for some chemical or agent or poison or scent or whatever, it’s almost always overwhelmingly composed of the same 3 elements- Carbon, Hydrogen and Oxygen? Yeah sure sometimes there’s a bit of Nitrogen, Sulfur, Phosphorus, Magnesium or whatever thrown in, but by and large, it’s like 9X+% of all the amazing things in the living world are made up of just different combinations of these 3 basic atoms. Seriously, think about it- that is totally way intense*!

*Yes, I know this is like completely “duh- hello…” to anyone with a background in chemistry or biology, but for those of us lay-people who never took an Organic Chem class, this is a huge eye-opener. I’ve said it before and I’ll say it again: the single biggest shock of this whole project has been a) how phenomenally cool chemistry really is and b) how phenomenally sucky chemists are at marketing it to the masses. (OC Rick and Clean Colin- are you reading this? Well of course OC Rick isn’t because he never reads my blog…) 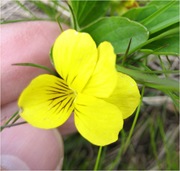 Mountain Violet is a teensy little flower; in another month, with shrubs grown up all around, you’d totally miss it. But right on the almost-bare, cold pavement of the forest floor, it’s spectacular. Spring and Summer are compressed up here, the growing season short. And because of that brevity, Summer days at 9,000+ feet in the Wasatch never feel lazy or “languid.” They’re busy, intense and high-energy, a 2-3 month-long explosion of life. I always find that the more summer days I can spend up at altitude, the more of that energy seems to rub off on me.

Watcher,
We have our own large scale isostatic rebound right here in Utah. It happened because hugungeous Lake Bonneville split town about 12,500 years ago. The areas with the deepest water = most weight have rebounded the most, up to 70 meters or more! This was recognized by a geologist named G.K. Gilbert back in the late 1800s. It is is why the Bonneville Shoreline is higher in elevation near where Lake Bonneville was deepest (where Great Sale Lake is) than at the more distal and shallow parts of the lake, like in Snake and Tule Valleys out west. You can read more about it here http://www.earth.utah.edu/geoantiquities/ancient-evidence/rebound.htm

I don't know if we are still rebounding or not. 12K years is not long in geologic time.

Thanks (not!) for reminding me of organic chem class.
Lucy

Because we had only one columbine blooming (that I knew of) for a few days, I tried re-sniffing it the following day. Guess what? I smelled it again. I don't know what's going on...

Could you please give advice #2 to my husband? I think that he follows the opposite rule. Just kidding...

The rebounding of the dirt is a really interesting concept.

KKris- Well, I'll get a close look Saturday, when I crest Bald Mtn Pass in the High Uintas Classic @~10.7K feet. Don't know that I'll be stopping for photos though ;^)

Lucy- Thanks for the local rebound beta- that's astounding. Not simply that there's rebound occurring, but that it's so dramatic. 70 meters? Wow!

BTW- I get the impression from your blog that you're a geologist (?) by trade. If you ever post more geo stuff I would totally eat it up... It's an area I'm weak in and would love to know more.

KB- Hmmm... so you sniffed the same columbine, but a day later... I haven't tried that combo before. OK, I feel an experiment coming on.

Feel free to fwd my advice to the husband, or just have him call in to my radio show!

Thanks the Quebec shout-out. It's been 10F warmer here than in Boston the past week. Take that, postglacial rebound.