Lite post today, no big science. Just a little something going on right now that’s worth noticing because it’ll be a HUGE thing in just a week or so.

Two Things That I Love

But first, let’s talk about 2 things that I love: 3-day weekends and September.

Aren’t 3-day weekends wonderful? It’s like finally, a weekend where you get time to do all the stuff you want to do on a weekend, and still (hopefully) get a little time to kick back. If you’re married with kids, you can work in quality family time, friends/outdoors time and some catch-up chore-type things without getting into a time-spent-on-what conflict with your spouse. I love it. I just wish every weekend lasted 3 days.

Tangent: And actually, the fact that every weekend is not a 3-day weekend is what convinces me that humanity has stopped progressing, and that the downfall of modern civilization is just around the corner.

Way back when, during the Industrial Revolution, people worked 10-12 hours/day, 6 days/week. When my father was a boy (early 1940’s), his father, a civil engineer, worked 5 ½ days/week, and my father remembers clearly when his employer switched to a 5-day work week, and my grandfather stopped working Saturday mornings. And for a several decades, it seemed as though this trend might continue. I remember thinking as a kid in the 1970’s that when I grew up, we’d probably be on a 4-day work week- and that wasn’t a crazy idea at the time.

But here we are, I’m probably >1/2 way through my career*, and there is absolutely no hope of a 4-day work-week on the horizon. The promise of technology, industrialization and the information age was that we’d all become wildly productive. And certainly by every respectable business metric American workers are far more efficient than they were 30 or 40 years ago. But if we’re not getting any more free time, isn’t that productivity ultimately just a bunch of hooey?

*God I hope so, anyway. If I have to spend another 25 years selling to geeks and going to trade-shows I am going to go freaking postal… 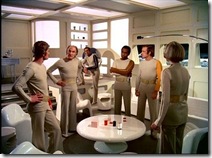 Nested Tangent: In fact, as long as we’re on the topic, I feel I just have to express how disappointed I am with how phenomenally lame the future turned out. Where’s all the cool stuff of the future I was psyched about as a kid? Where’s my flying car? Where’s my robot friend? Why don’t we live on other planets? Where’s my freaking jet-pack already? This “future” turned out so lame, it’s like being stuck in a bad discotheque for 30 years…

Actually I don’t really believe any of that. Although I still think iPhones are a) lame, b) overblown and c) cultish, I really do believe that my lifetime has been, and continues to be, the most exciting period to be alive, ever. The explosion of knowledge in biology and astronomy alone over the last 20 years has been unparalleled in human history. Combined with literate populace- who could therefore understand these discoveries if they ever bothered to pay attention- it is an amazing time.

Oo- nice double-rant. What was the 2nd thing again? Oh yeah, September. Last week I was talking to a colleague up in Toronto, and she commented on how nice it is up in Toronto in September. 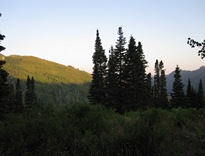 So Monday, which was part of a 3-day weekend in September, SkiBikeJunkie and I rode Super-PBX. We had a great ride, meeting up with Hunky Neighbor en route. It was SBJ’s first time riding up in Pinebrook, and he thoroughly enjoyed it. 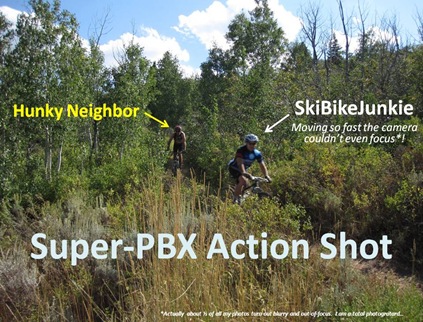 Tangent: It’s always nice when you take a friend on a favorite trail of yours and they really enjoy it. Conversely, when a friend doesn’t like your favorite trail, it can be a bit of a let-down. It’s sort of like playing your favorite album for, or loaning your favorite book to that friend; if they don’t care for it, you feel kind of deflated. But if they really like it, somehow you like it even more. I know, I know, it’s an animal-pack-mentality thing; it shouldn’t matter whether my friends like my favorite things. But let’s be honest- it does.

Nested Tangent: Maybe this is why it used to needle me that OCRick never reads my blog. But by now I’ve gotten so much mileage out of that running joke, I sort of hope he doesn’t start reading it. 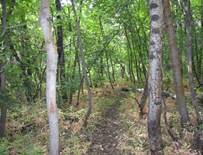 Much of the riding around Pinebrook is through Gambel Oak and Bigtooth Maple, and every Fall, the Maples are the trees that start to turn first in the Wasatch. Already there are little hints of orange and red on select limbs of scattered Maples, and a week from now bright red Maples will be scattered across the hillsides everywhere. Last Fall I did a 2-part series*on why leaves change color that you can go check out if you’re curious, but the key point of that series regarding Maples is that their foliage stands out a bright red because, unlike most deciduous leaves, when Maple leaves stop producing chlorophyll, they start producing anthocyanin.

*The first part also explains a bit about chlorophyll and the evolution of chloroplasts, so if you don’t know how that all works- and you really should- that’s another reason to check it out.

The evolutionary explanation for anthocyanin still isn’t 100% clear, but it makes for spectacular foliage, and red Maples serve as the first clear indicator that Fall has arrived.

But this year I’ve been paying closer attention, and it turns out that clear signs of Fall have been all around for 3 or more weeks already. 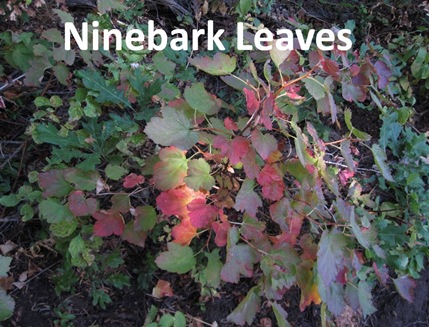 At the top of X trail, we stopped so that I could snap a couple of photos. I’ve been watching Ninebark throughout the season, and on Monday’s ride I noticed something I’d never noticed before: their leaves are turning red. Not orange, not yellow, but red. Ninebark appears to be producing anthocyanin. 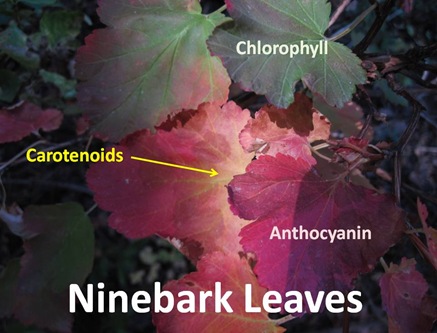 And not just Ninebark. Over the past 3 or so weeks you may have noticed spots of red decorating the high meadows. If you stop and get up close, it’s almost always the same leaf-type, one that we’ve looked at before: wild geraniums, and I’m pretty sure the leaves of both Wasatch species- Richardson’s and Sticky Geranium- are turning red. 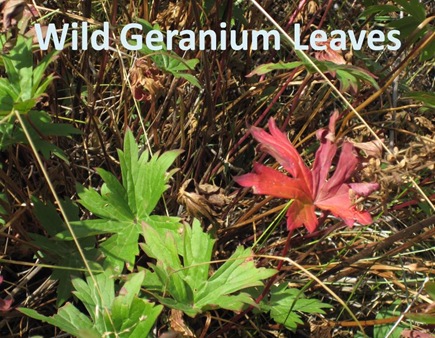 These shrubs and forbs are going through right now what the Maples will be going through over the coming weeks; they’ve stopped producing chlorophyll and are evacuating their leaves of nitrogen and nutrients to sustain themselves over the coming winter and prepare for the following spring. And they’re producing anthocyanin to protect their leaves during this evacuation and possibly to dissuade predators/parasites.

Anyway, it seems cool that there’s this little ground-level mini-autumn happening as almost a prelude to the color show that’ll be firing up in the next week. It’s real easy to see if you look around just a bit, so check it out if you get out this week.