I have a cool post brewing, but it’s not quite ready yet.* But I’ve got good filler.

*Wanted to check a couple bug ID’s over on bugguide.net. Those guys are awesome.

I think one thing every blogger struggles with is whether and how much to evangelize. It sure is tempting sometimes to just go off about something you feel strongly about, whether it’s religion, gun control, abortion, wilderness protection, healthcare reform or Sarah Palin. But really, if you start evangelizing all the time, you’re just another middle-aged white guy spouting off on the Internet. That’s right- you’re Glenn Beck, without a, uh, TV program. So I think that in general it’s important not to evangelize on your blog. Or, if you really can’t help yourself, pick one topic that you’re going to evangelize about and come back to it every now and again, but just don’t do it every post.

People have all kinds of reasons for being appalled by the idea of Sarah Palin running for president. So do I, but it’s not the same reason you’re appalled. No, I’m appalled because Sarah Palin is exactly the same age as me, and every time I see her speak I am reminded of my High School Girlfriend (HSG).

My HSG was a great girl. And on the surface it may not seem to make sense that I’d associate her in any way with Palin, because my HSG was kind, fairly liberal, didn’t wear glasses, thought you should help out poor people, and had a thorough understanding of how birth control worked. But there was a moment we had one night that somehow I am reminded of whenever I think of Palin.

It was the summer of 1982 and we were driving home to Boston from my parents’ cabin in Maine, where we had spent the day… well that’s not important. Anyway, we were driving South on I-95 through New Hampshire, and it was a beautiful night with a full moon, and there were a few clouds in the sky as well, and we were just driving along, not talking much, when HSG said, “Alex, which is higher, the moon or the clouds?” And I knew right then, that wonderful and kind as HSG was, that this was not going to be a Long Term Thing, and indeed it turned out not to be.

I don’t know why, but whenever I see Palin on TV, I am instantly transported back to that moment on I-95 in New Hampshire. I just hope it doesn’t turn out to be a Long Term Thing.

OK, that’s good advice, and you should do it, because I don’t. Here at WTWWU I actually have 2 evangelical causes. One is high-minded and noble and altruistic, while the other is self-indulgent and juvenile. The high-minded/altruistic cause is of course the whole theme of this blog, which, if you haven’t figured it out by now*, is this: pay attention to the natural world around you. It’s full of wonder and amazement and absolutely incredible stories behind everything little thing, and once you start paying attention to it and understanding it and realizing how you’re connected to it and really seeing it, then well everything just changes, including you, in a really great way, that you couldn’t ever have understood if you hadn’t started paying attention to it.

*Really? You haven’t figured it out by now? This is post #285. How much longer do I have to keep at this before you get it already?

The self-indulgent and juvenile evangelical cause is this: Go night-riding. No, it won’t change your life like watching the world wake up will, but it sure will add some zing to it, as I have blogged about previously.

Mtn bikers are always making excuses for not night-riding. Most of them- cold, time, etc, - are totally lame. But there is one pretty good reason: light. A decent mountain bike light set-up costs a few hundred dollars, and represents a pretty big commitment. What if you don’t like it? What if you spend a bunch of money and never use the lights again? That’s a valid concern. Until now.

Well over a year ago KanyonKris did a post called Mountain Bike Lights for under $65. He mentioned it to me a couple of times, but seeing as I already had a fairly high-end HID light, I didn’t think much about it*. I just kept riding with my bar-mounted HID light and my rather clunky-but-effective TurboCat S-15 mounted on my helmet.

*Actually that’s not true. I did think about it. Specifically I thought, “$65? Gotta be a piece of crap. I’m serious about night-riding and I like to go fast. I’m not bothering with it.”

But then last month in Fruita, when the rain finally let up and we wheeled out for our night-ride, Vicente turned on his new light. And we all stopped and checked it out. It was bright, it was strong, and it was from Hong Kong. It was the TrustFire TR-801 from DealExtreme, spec’d from KanyonKris’ post. Since then I’ve bought 2, Hunky Neighbor’s bought 2, and SkiBikeJunkie is about to order. I received mine last week and have been thrilled. First, because of the light. Check it out.

Here’s my existing lighting system, the NiteRider Firestorm HID, It’s plenty bright, runs for 4 hours. The battery pack is about ~1lb, and the light itself is a titch heavy/bulky; it’s a much better bar light than helmet-light. 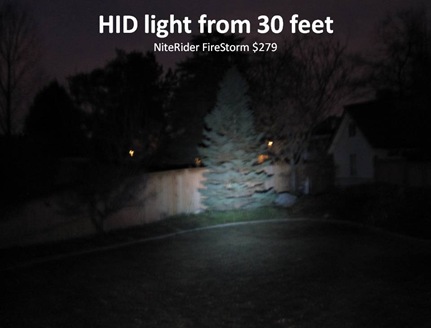 Now here’s KanyonKris’ Miracle Light, the TR-801. It’s a spot, not a flood, but the illumination within the spot is at least as strong as the HID. 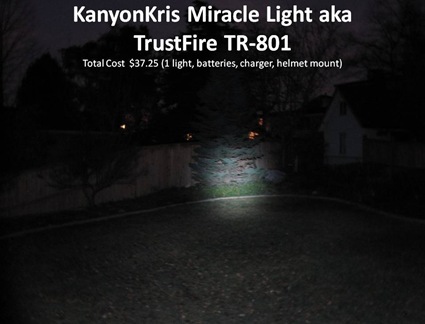 Together, the spot and flood complement each other nicely. Coming from slightly different angles (bar vs. helmet) the 2 lights act to mitigate harsh shadows and provide a more 3-dimensional view of the trail ahead. 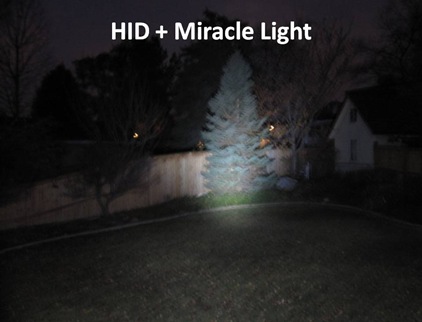 So the light’s great. But the second great thing is the weight and size. Here it is mounted on my helmet. The weight is negligible, and it runs for >2 hours on a single lithium battery. (The batteries, which are about 30-40% bigger than AAs, are small enough to pop a spare in your pocket for longer rides.) And the third great thing is no chord. No external battery pack, no tricky routing, no removing your helmet to add/remove a layer of clothing, etc. 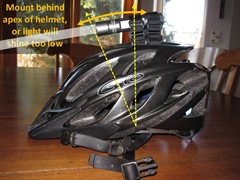 But best of all, it’s cheap. $65 for 2, or just $37 for 1 plus charger and batteries. There goes your last excuse not to night-ride. And now’s a good a time as any to mention that these lights are great for non-cyclists as well. If you’re into night-hiking or wildlife spotting, this little light is fantastic.

As longtime readers know, I like to whine about the future, and how lame it turned out- no flying cars, no robot friends, no moon-base- just a bunch of guys looking up directions on their iPhones... But lighting is a notable exception. In just 15 years cycling lighting systems have gone from old-style flashlights to halogen to HID to the new generation of super-LEDs. The change is absolutely amazing.

Tangent: 2 other exceptions for me are fuel injection and radial tires. Does anyone remember carburetors? And flat tires are rare enough these days that when we do get one, we have to dig out the owner’s manual to remember where the jack is…

Anyway, I can’t say enough how thrilled I am with this light. Do yourself a favor and put it on your Christmas list. But order early- shipping from Hong Kong takes ~ 2 weeks.

I think this piece is really unfair. HSG took me out for ice cream a bunch of times. Palin? Not even once. If she wants my vote in 2012, she needs to work harder than that.

So this is how Rachel found out I was going to buy that light setup. I can't tell you how relieved I am it wasn't the $279 HIDs you were evangelizing.

First, your HSG / Palin tangent was excellent. I literally laughed out load.

I'm glad you're happy with the lights. You do a MUCH better job "selling" them than I did. I'm an engineer so I'm all about facts - you brought the sizzle.

If you want more light, perhaps to replace your HID on the bars some day, there's this:

The HSG/Palin tangent was great.

I don't get it - your "filler" posts are twice as long as my "meat" posts - complete with custom graphics and a level of lucidity that could come to me only after hours of pondering. You're amazed that I carry on two blogs, but I'm amazed you carry this one.. this well... every couple days or so. You're amazing!

Wow, those are great, inexpensive lights. We love the MiNewt Mini-USBs.

for $85 you can get a pretty killer China light.

Phil- Oh yeah, I forgot about that whole weird taking-you-out-for-ice-cream bit. What did you 2 have going on exactly, anyway?

SBJ- Phew. Glad I was evangelizing something cheap. I will take care in future posts before announcing your purchase plans. (Rachel still reads my blog? Oh good- I’d feared she’d blacklisted me after the natural childbirth bit!)

KKris & Enel- I think the lights you each linked to are the same. Looks like quite the weapon. Not sure that I need it right now, but for 80 bucks I think I’ll throw it on the Xmas list just the same.

Ted- I’m glad someone thinks my posts are lucid- thanks!

Jube- that MiNewt looks like a nice light. I stopped by NiteRider’s page and they now have a bunch of LEDs and only one HID model. I think the LEDs just make too much sense for just about all buyers now.

Late to the party here and these lights do seem pretty cool but I have several DiNotte lights that are 200 lumens and are just over $100. Easy on and off the handlebars with an "O" ring mount. They run on 4 AA batteries, I use rechargeables, which last 1 to 3 hours depending on the brightness setting you choose.