What’s this? A whole week without posting?* Yikes! What is the world coming to? Well I didn’t post because… yeah, yeah- you think you know already- I was real busy with work, right? Wrong! I was on vacation. Specifically, I was attending “Race Camp.”

*Don’t worry- I’ll get back to Mars soon enough.

My new team goes down to St. George every March for 4 or 5 days of early-season riding and such in an outing called

‘Race Camp.” It’s about the cushiest “camp” I’ve ever attended: 3 of the guys have- or have friends/family with- places in town, so I slept in a soft bed every night. After a few weeks of not-enough sleep, the riding all day and sleeping 8 hours/night thing was pretty sweet.

Tangent: Which reminds me, someday I want to do a post on sleep, and how phenomenally weird it is. Think about it- you do stuff all day and then you get tired. Real tired. So tired that you lie down and lapse into unconsciousness. Now under other conditions when you lapse into unconsciousness- fainting, passing out, exhaustion-collapse- it’s considered a serious medical situation, and people will call an ambulance, or if they’re on an airplane, the pilot or maybe head flight attendant will come on, and ask if there’s a doctor on board the aircraft.

Nested Tangent: That’s like the only time I ever wish I were a doctor. Seriously, 99.99% of the time I have absolutely no desire whatsoever to be a doctor. Oh I know they make good money and get respect and all, but I just couldn’t do it. You probably think it’s because I get grossed out by blood or organs or what-not, but that’s not it. No, what turns me off is having to listen to people complaining, and when you’re a doctor, all you hear is people complaining all day- my toe hurts, I’m fatigued, my hair hurts, I’m dying of such-and-such, I’m hosting an alien predator organism, blah, blah,- all day long. I’m way too self-involved and non-empathetic to deal with all that. But when the pilot asks for the doctor on board, and some guy or lady stands up and starts walking back, you- and everyone else on the plane- thinks, “Wow! He/she is probably going to save someone’s life! He/she is so awesome!”

You know what I wish? That just once- just one time- the pilot would come on and say, “Ladies and Gentleman, we have a Sales Emergency. If there is a Salesman onboard this flight, would you please identify yourself to the flight attendant?” And then I’d stand up and start walking back, and everyone would be looking at me and thinking, “Wow! A salesman! He’s probably going back there to close a deal! He is so awesome!”

But every day, pretty much all of us lapse into unconsciousness, and it’s totally no big deal; 99.9999% of the time, you wake up just fine. And not only do you wake up just fine, you feel better. You didn’t eat or drink anything, no one injected you with anything, you just lay there, doing nothing. How does that make you feel so good? Anyway, that’s why I want to do a post on sleep. But I couldn’t do any research on it last week. Because I was too busy biking. And sleeping.

So no research, no good science, but some great helmet-cam footage. This first one is really just FYI. In several race-season posts last year I referenced a “double paceline.” Here’s what it looks like when you’re in one. This was Friday as we rolled through Sand Hollow, on our way out to Zion NP. 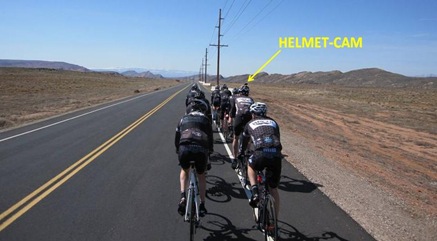 Note: One thing about all of these videos- from time to time you’ll see the camera suddenly swivel to the side about 90 degrees. When this happens, I’m actually looking back. But when you look back on a bicycle, your head only actually swivels maybe 90-110 degrees; the rest of the look-back is done but moving your eyes. BTW, all the YouTube videos here are in HD, so toggle up to 720p to view.

We continued on and up through Hurricane, La Verkin, Virgin, Rockville, Springdale and finally to Zion National Park. Once in the park we soft-pedaled our way up to the end of the road, by the mouth of Zion Narrows.

Utah has 5 national parks. They’re all great, but Zion is probably tops for sheer majesty. 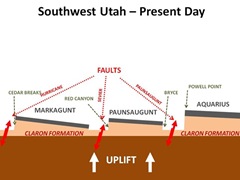 The centerpiece of Zion NP is Zion Canyon, which has been carved out of the Southern edge of the uplifted Markagunt Plateau by the North Fork of the Virgin River. The Markagunt is of course a) one of the 3 high plateaus of Southern Utah and b) the only one of the 3 I haven’t properly blogged about yet (though I keep promising to do so.) As the plateau has lifted and tilted, the river has gradually worn away at the layers of underlying sedimentary rock beneath. It’s estimated that the canyon is deepening by about an inch a century or so, and probably more in wetter times, such as the most recent ice age.

As you stand in the bottom of Zion Canyon, the towering cliffs around you are 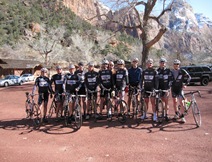 Navajo sandstone, a formation formed from petrified sand dunes somewhere around 200 million years ago. Navajo is the “classic” slickrock. Moab’s slickrock trail rolls across it, and most of the best slot canyons on the Colorado Plateaus are carved out of it. In little-known places down on the Navajo Reservation in Northeastern Arizona, it forms long, endless waves, where you can surf a bike for hours without seeing another soul.

Immediately below the Navajo, forming the low, broken slopes rolling down to the canyon bottom, is the Kayenta formation. In many areas across the Colorado Plateau, Kayenta is prime rock for finding dinosaur tracks (Triassic species).

Extra Detail: Wonder what’s under you? Probably the Wingate formation, which is what the high walls of lower Twin Corral Box Canyon are made of…

Tangent: Here’s a way to tell native Utahns from non-natives: Natives always refer to the park as “Zion’s”, with a (presumably possessive) “s” at the end. Non-natives always just call it “Zion.” I don’t know why this is; “Zion” isn’t a guy; it’s a term that refers to the biblical land of Israel. How did it come to be used in the possessive form? Utahns of all sorts, BTW, both native and non-native, pronounce it “ZIGH-un.” Only out-of staters say “ZIGH-on.” While we’re on the topic, only out-of-staters say “ALL-tuh”, when speaking of the ski resort Alta. Utahns say “Al-tuh”, where the fist syllable is pronounced like the first syllable in “Alex.”

Here’s a clip of Teammate-Brian and I, who dallied up top, zipping down-canyon to catch the pack, picking up Legendary Courtney en route. This clip has some nice shots of the high canyon walls.

Together we pacelined quickly back the way we’d come up, until we finally approached the big drop down to La Verkin. In this clip, about 35 seconds in, Teammate-Perry takes off, I jump on his wheel, and together we hammer down the descent at about 45MPH, rotating leads to maintain the break.

Extra Detail: This hill we’re descending by the way, isn’t just any hill- it’s the Hurricane Fault, the westernmost edge of the Markagunt (and I believe entire Colorado) Plateau. When we drop this hill, we’re actually crossing geologic provinces, from Colorado Plateau, to Basin and Range, the province which continues clear to the Sierra Nevada. (Damn- I tell you what: For a glorified video-filler, this post’s got some kick-ass geology…)

It was a long, great day. Here’s one more clip, that’s mainly for out-of-staters. If you’ve never visited Zion NP before, but always wanted to, here’s your chance- 11+ minutes of footage rolling up-canyon from just above Zion Lodge. The riding isn’t very exciting, but the scenery’s great.

So, weren’t those pretty videos? That’s nice, because tomorrow’s videos will knock your socks off.

Next Up: Tyler2 And I Play Hooky.

* Born in California, moved to Utah when I was 6.

That's a sweet route - I need to it some day.

The double paceline video was good. We had a cycling group at my last job and we rode well together. We'd do double pacelines at centuries, but invariably we'd pick up some gomer who couldn't figure it out and the paceline would fall apart. So we got belligerent and wouldn't let anyone in. We weren't complete jerks, the other riders still got a nice draft off the back.

OK, you wanna know what's weird? I sort of think of myself as a Utah native because I grew up here, but the truth is, I'm not native because I wasn't born here, and I think you've lived here about as long as I have.

Anyway, that's neither here nor there to my half-baked theory about the S on Zion. To a mormon in Utah, Zion as a place name has connotations similar to what it has for someone who's Jewish. So for a mormon to say "I'm going to Zion" it means something besides just going to the park, so they add an S and call the park "Zion's" in order to make a distinction.

But I'm probably giving them too much credit for actually thinking about what they're saying, and the reality is that most are just parroting back what they've heard others say.

FWIW, I may occasionally call the park "Zion's" when using the one word shorthand. However I would NEVER (unlike others I have heard) call it "Zion's National Park."

I admit I've called it Zion's, and I'm terribly embarrassed, since I KNOW it's Nordstrom and not Nordstrum's.

I loved the beautiful scenery in your videos. Thanks for sharing that.

If we're ever on the same flight, remind me before we board, and I'll call out halfway through that I have a sales emergency.

It's not "Zions" in the plural because there is only one national park named after Zion. If there was more than one named "Zion", well, then... you get the idea.

I'm considered a Utah native for I've never been outside of the state for anything other than business or vacation. I call Zion National Park, "that place down south with the Subway's."

That was fun. Will you be hashing the Utah dialect again soon?

Rachel- I am emailing you my travel schedule for the next month. Try to be on one of my flights. I will practice my purposeful, do-gooder stride up the aisle...

Rabidrunner- Uh, I don't know where to begin... Thanks for sharing.'preciatetcha.

“Wow! A salesman! He’s probably going back there to close a deal!..."

Somehow you made watching helmet cam video of road biking interesting. I am serious when I say that.

I enjoyed the double paceline, the catch and the breakaway. The Porsche sounded nice passing you as well.

I find it amazing that there are that many grown men, presumably with families and day jobs who are serious enough about an amateur sport to find and take a bunch of days off for camp, not to mention the commitment involved in the race season. Impressive amount of dedication.