Spring... Spring! When you are a) a mtn biker b) a flower nut and c) a Total Cold-Pussy there is simply no better time of year. This year I celebrated the first full day of Spring with- what else?- a frozen Shoreline ride. The air was crisp, the sun bright, the trails hard and smooth*.

*Except for the deep ruts where bikers had ridden through mud during the middle of the day. Seriously- not only are you messing up the trail for us grown-up riders who wake up before noon**, but how un-fun is it to ride through that slop?

**I’ve said it before and I’ll say it again: anything really worth doing is worth doing at dawn.

Right above the 5-way Bobsled/City Creek/Shoreline junction, there’s a little knoll up above to the North that I love to peak out on. Here’s the last minute up, breaking into the sun, with views opening up of City Creek Canyon, the Great Salt Lake in the distance and the entire Salt lake Valley below.

Tangent: I have a bunch of little side trails I like to do off Shoreline. 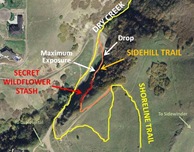 My favorite is that way off-camber drop-in to the mouth of Dry Creek where you Absolutely Cannot Put A Foot Down. A bunch of my friends won’t even do it. Know when it’s really scary? When some doofus has put a big rut in it the day before, which is now this frozen ridge of terror right in the middle. Does anyone local else ride this? I just love it…

BTW, know who bombs this thing? OC Rick, that’s who. 63 years old and the guy is like a rocket down it. If he ever gets stuck behind me on it, he berates me to taking it slow the entire way down… Also BTW, the top of this trail, when you’re still in the scrub-oak, is a wildflower bonanza in late May/early June. Loads of great stuff, especially some beautiful blue Penstemmons.

Just before the final climb, I spotted it- a spot of yellow and green alongside the trail- my first flower of 2010. It was Long-Stalk Spring Parsley, Cymopterus longipes, the mystery flower from my very first post, which I finally ID’d and blogged about a year later. I dismounted and crouched for a photo, 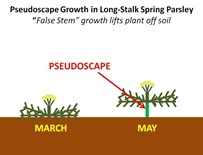 whereupon I noticed it everywhere. On south-facing slopes between around 5,000 and 6,000 feet it’s blooming all over right now. Presently the leaves are down flat across the ground; over the next 60 days they’ll steadily lift up off the ground an inch or more as the pseudoscape develops.

Tangent: Isn’t funny how until you initially notice something, you never see it, but then after you notice it, you see it all over the place, and it’s like, “How did I not see this thing all over the place before?” I don’t mean just plants- though that’s certainly the case- but all sorts of things: specific makes of cars or bikes, pigeons, AT bindings at ski resorts, LOTOJA stickers, boob jobs- you name it. Once you notice it once or twice, it’s like everywhere!

In March and Early April, the Shoreline trail is a joy; by May I’ll be sick-to-death of it. I’ve blogged a lot about stuff along this trail (a partial list of which I included in a tangent to this post.)Anyway, here’s another great thing about riding early: you can bomb down a great descent on a heavily-trafficked trail without taking anyone out. Here’s what it’s like to zip down Dry Creek when you have it all to yourself.

But wait, I have a problem. For some reason my video didn’t capture any sound. Now it turns out that I did this same descent Friday AM, and I did capture sound on that video. But the thing is, the Sunday descent was faster. About 15 seconds faster. And it looks better. So. You can watch the descent in silence*, at zippy-high-speed, or…

*Yes silence. Because one of my pet peeves is watching other people’s bike videos set to music. It seems like mtn bike videos are always set to some head-banging, overly-dramatic, yelling/screaming, power-chord-laden formulaic wannabe death-metal anthem… I figure I torture readers enough between my geeky science factoids and my endless run-on tangents; I can’t subject them to whatever musical craze** I’m into at the moment.

…or with sound*, but not quite so fast. Friday was my first(?) time descending on frozen/snow-free Dry Creek this year, so maybe I got it dialed in a bit more by Sunday…

*Sound includes mostly rushing of wind, rolling of tires, occasional Watcher-Whoops, and… me hollering out before blind corners. Really, this is the only effective way to warn uphill bikers/hikers/runners. A bike-bell doesn’t do jack. As OCRick says, “You don’t need a bell descending Dry Creek; you need a siren.”

Really, Sunday was one of those Zen* days, where body, bike and mind just clicked. Look how smooth the S-Curves went behind the zoo. (Yes, I’ve shown video of this before. This is way smoother.)

* I know enough about Zen to know that the word is way overused, and that mtn biking has pretty much nothing to do with it, so my apologies to any readers who are honest-to-goodness** practitioners/ students of Zen Buddhism.

**Really. I mean you are really honest-to-goodness into it. Not just new-agey-karma-phoney-baloney-Shirley-Maclaine-I’m-just-a-slacker-masquerading-as-a-deep-philosopher-and-really-like-the-Kill-Bill-movies kind of Zen…

Oh man. Am I ever going to get on with this post? Yes I am. 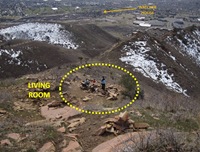 Sunday afternoon, together with the Junkie Family, we did a family hike up to the “Living Room”, a foothill overlook so named because of the various pieces of furniture- armchairs and sofas- constructed out of sandstone slabs up top. It’s a wonderful hike- short enough for small kids, but steep enough to feel like exercise- with great views of downtown SLC, the Great Salt Lake, and the entire Salt Lake Valley. 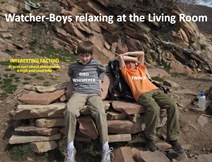 We spotted plenty of LS Spring Parsley and Crane’s Bill along the way, and up top, as they were scrambling up and down the tilted sandstone slabs, Twin B and Junkie Girl called me over to check out a flower. It was diminutive, four (cleft) petals, and I didn’t recognize it. Back home that evening I identified it as Spring Whitlowgrass, Draba verna, (pic below right) a common early bloomer of the Great Basin. 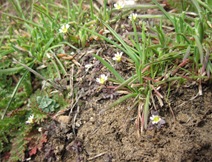 Draba is a genus of some 300 species, called Whitlowgrasses, found across Eurasia and North America. Whitlow-grasses aren’t grasses at all*, but belong to Brassiaceae, the Mustard family, and so are related to several other flowers of that family we’ve looks at before, such as Dyers Woad and Pale Madwort, as well as cabbage, broccoli, radishes, and, of course, er… mustard.

*Grasses are monocots. Brassiaceae are dicots (specifically eudicots) and the 2 have not shared an ancestor in well over 100 million years.

Extra detail: Broccoli, cauliflower, kale, cabbage and brussel sprouts are all cultivars – that is bred, or artificially selected from- of the same species, Brassica oleracea (Wild Cabbage).

Spring Whitlowgrass is hard to pick out unless you check out the ground closely. The flowers are only 1/8” -1/4” across. Its strategy seems to be grow quick, flower and seed early before any of the bigger stuff gets going. It does well in sandy, disturbed sites, avoids moist areas, and closes its flowers when it rains. D. verna is pollinated by flies and wild bees and also self-pollinates easily. 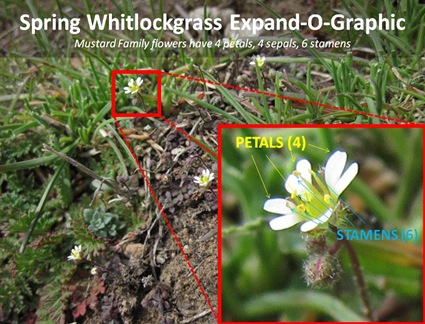 When I ID a new flower, one of the first things I do is find out whether it’s native or exotic. But- and this is the cool thing* about Spring Whitlockgrass- in this case, botanists don’t know. For a long time it was considered an invasive, a Euro-import accidentally introduced to North America, and most sources you’ll come across will list it as such. But now they’re not quite so sure, and suspect it may be native.

*Because, if you haven’t figured it out by now, there is something cool about every plant. 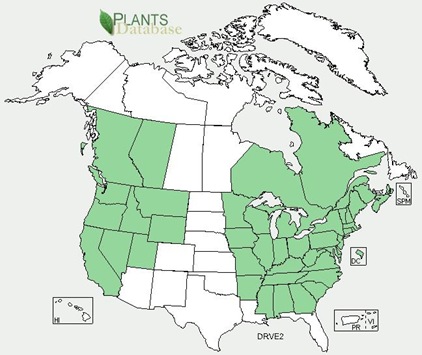 Conjectural Tangent: Even if D. verna is native to North America, that doesn’t mean it isn’t an exotic here. Or vice-versa. Maybe it was native to just Eastern or Western North America (in addition, presumably, to Eurasia) and was subsequently introduced to the other half of the continent, thereby explaining the disjoint distribution. And then again, we’ve seen plenty of examples of likely non-human-induced long-distance introductions, including cactus in Africa, Creosote in North America, and everything from monkeys to porcupines in the New World. I just love stories/mysteries of introduction and migration. It’s like every little thing has this amazing saga behind it.

I used to ignore little flowers, and well, little stuff in general. But as I’ve gotten more and more into living things, I pay more attention to them. So often it seem that little things explain the big things, and the Big Things of Spring are about to explode. 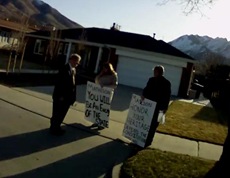 On my way home, at 9AM Sunday morning, this handful of protesters was outside his house. Never mind that he was away in DC, or that the Salt Lake Tribune’s headline that morning already had announced his “no” vote. What I loved about this group were the signs. I don’t care what your cause or your position, when you carry around a sign that declares someone to be an “Enemy of the State”, you need to stop, take a deep breath, and ask yourself: How am I not completely batshit crazy?

Oh, and BTW Jim, I’ve voted for you for the last time. It’s complicated.

Im with you on the ruts in the trail thing. It seems to be prevalent everywhere. Anyway keep up the posts! It helps the rest of us to notice the flowers, sky, etc. And a dummy like me to learn something!

While I'm sure it's quite beside the point of your lovingly crafted post, you have improved my life by your pointer to Rodrigo & Gabriela. They're kind of fantastic - thanks!

// and should you find yourself in need of a power-chord laden metal anthem for your next video 'drop', may I suggest France's own Lonewolf:

I'll add another music choice prevalent in a high proportion of outdoor films: the dub reggae/electronica mix. It's so predictable and incredibly boring. I think I'd almost rather hear country just for something different (and I hate country music).

PS. You probably would have made some cold-weather pussy comments on our sluggish morning starts last weekend.

I should make an intellectual comment, but having been out on the bike the last week or so all I can say is "yea, it's Spring!"

Local rider here. About that "way off-camber drop-in to the mouth of Dry Creek": never ridden it because I thought it was too scary, and now, after your video, I my fears are confirmed. Maybe I'll hike it first in late May for the wildflowers.

Thanks for the rides-- love the little shadow-Watcher pedaling up the hill to a terrific view. A little concerned about all the crossings and riparian damage on the LDC...

Good job on keying out the Draba. Mustards can be tough! Yay spring; I'll try for flower pix when we get thru the next few storms... today, next week... coming thru like trains on a timetable.