Sorry for the slow posting week. I spent part of this week traveling for work, and have been pretty heads-down with this whole “earning a living” thing. I should be able to catch my breath over the long weekend, and hope to catch up on some of the bird and flowers goings-on over the last couple of weeks of this weird, wet, late Spring.

Tangent: I decided this week that JFK is my least favorite US airport. Seriously, what is going on with that place? It’s the biggest airport of the biggest city of the world’s biggest superpower- the country that invented the airplane and put a man on the freaking moon- and yet the place feels like a cross between a collection of 1960’s warehouses, a third-world flea-market, and the Fashion Place Mall the day before Christmas. The layout is labyrinthine, the setting depressing, the logistics and access complex and difficult, and the employees sullen and unhelpful. It is- in one miserable package- the embodiment of all the bad stuff about the Northeast I left behind 20 years ago. Could this airport be any crappier?

My new company is headquartered in Southwestern Connecticut, which means I have to fly in and out of JFK fairly often, and that many of my new colleagues live in the greater NYC metro area- from Northern New Jersey to Southern Connecticut. All of these people pay, in various ways, the price of living in and around such a large metro area. Their housing is expensive, their taxes high, and they deal daily with daunting traffic, commutes and crowding. But what’s really sort of sad is that hardly any of them ever go into Manhattan. Whatever your opinion of large cities, New York is unique and has many things to offer- culture, cuisine, history, commerce- that are unmatched by any other city on the continent. Here are all these people- not just my coworkers, but probably several million like them- who daily put up with the hassle and cost of the massive NYC-Metro sprawl, but virtually never enjoy the benefits of the city. Ugh. It’s just depressing, and I end up coming home from each trip to HQ feeling a bit worn out and deflated…

Where was I? Spring, right. And it is indeed, way late here in Northern Utah. The foothill oaks are just barely leafing out, and June is next week! Yesterday morning before work I road 24/7 up in Jeremy Ranch, my first mtn bike ride of the year on the Park City side of the Wasatch, and by far the latest I’ve ever started riding over there. In the helmet-cam clip you can see that although the grasses are green, and a few early wildflowers are popping out, the oaks at ~7,000 feet are still bare.

Wednesday morning I rode up Big Mountain Pass, the oaks were also bare, and the aspens were just leafing out. The lingering patches of roadside snow you see in this clip are left over from Monday’s storm.

So anyway, just a quick thing I wanted to post about so the whole week isn’t “dark” here. Last week when I was doing one of my City Creek rides for the geo-post, I noticed this Yellowjacket on an outcop of volcanic breccia I’d stopped to photographs. Only she’s not a Yellowjacket- she’s a European Paper Wasp, Polistes dominula. As we know from last Fall’s Yellowjacket post, the giveaway is her orange antennae; Yellowjacket antennae are always black.

Euro-Paper Wasps are recent European imports, having arrived in North America only in the last ~30 years or so, and there’s a good chance that this young queen’s 30X great-grandmother showed up when I was in my early teens, within 10 miles of where I was at the time. 30+ years later, and almost a continent away, here we are. 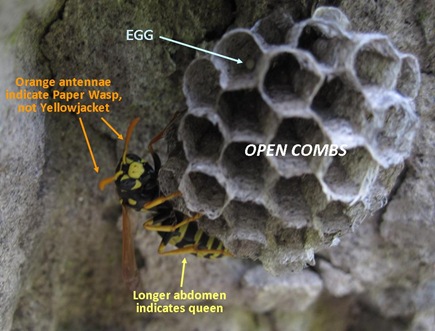 I know she’s a queen because she’s building a starter nest. Having mated late last summer, she survived the winter in some safe nook and now is trying to build enough cells to lay an initial batch of eggs (and in fact you can see an egg in the top left cell in the photo.) If she’s successful, her first generation of daughters will take over the care of her, the nest and successive daughters, and eventually sons. Her nest already shows the standard Paper Wasp architecture: Lots of open combs, and attached to the rock by a narrow petiole.

She’s also bigger than a worker would be, and besides, probably all of the Paper Wasps and Yellowjackets you see in Northern Utah right now are queens; they haven’t raised workers yet. In fact, even though Wasps/Yellowjackets aren’t yet much of a nuisance yet, this is an excellent time to keep an eye on them; they’re looking for/starting nesting sites, so it’s a good time to shoo them away from your back stairs/porch/garage/etc.

If this queen manages to raise that first generation, she’ll then retreat into the nest, never to emerge- unless disturbed- for the rest of her life. I’m not optimistic about her chances. Only a small portion of starter-nests succeed, and along this well-traveled trail, it’s not unlikely a passer-by could harass or destroy this one, or for that matter she may simply abandon her effort in the presence of so much large animal activity.

Lately I’ve been so busy I’ve had trouble getting things done. Like so many animals, we do a little of this, a little of that, and then a little more of this and that. Having developed a sophisticated culture and scaled up our society in terms of complexity and numbers and types of social relationships, we now so often find it hard to get “this and that” done*.

*I think part of the reason for my challenges in getting things done at my new company is my low Dunbar number. At my old company, with just 150 people, I managed to convince people I was more than just an articulate chimpanzee without too much effort. At this new, 4,000-employee company, it’s a bit trickier. Any day now I’m afraid they’ll figure me out and just start feeding me bananas.

This is what impresses me most about insects: their single-minded tenacity in getting stuff done. All alone, all day long, with zero support, oversight or encouragement, this queen diligently chews up wood/plant matter, mixes it with her saliva, and sculpts it into comb after comb. And her whole life is just one, dedicated sequential task after another. She’s born, fed by her sisters, then flies out of the nest and mates, in a spectacular aerial dogfight/orgy. Then she’s done with mating, and never has anything to do with it again. She finds a nook, and “sleeps” through the cold winter. When she emerges, does her little brain hold any memory of her past- her home nest? Her mating flight? Or does she think she was just “born” right then, full of eggs? Yes, I know she’s not thinking great thoughts, but insects do remember things. They remember food locations, threats, and can learn their way through mazes.

When/if she manages to enter/remain inside her nest, she’ll never show any desire to voluntarily emerge again. This queen, who left her home nest forever, who flew through –and mated in- the sky will just sit at home and pump out eggs till the end of the season, and the end of her life. Does she ever remember anything from before? Does she ever reminisce? “Ah, when I was young and flew through the sky…”

Oh, sure I’m being silly. But animals- including insects- obviously fear and want and lust and strive at least as much- and often seemingly more strongly- than we do. And fear and desire may be simple, but they’re emotions. When her eggs hatch, the larvae grow and then pupate into young adults, is she “happy”?

What is going on in her head? It’s just a bug, but it’s that Mystery of Self all over again. It’s everywhere I look.

I’ll try to take a spin back up City Creek this long weekend. See how she’s getting along.

Don't let that queen was fool you. I saw here downtown a few days ago at Red Rock having a drink and smoke.

I travel to Manhattan regularly as my employer is based there, and the reality is that most Manhattanites don't take much advantage of the place's unique cultural offerings. For that matter, I've probably been there 25 or 30 times in the last year and a half, and have yet to do anything beyond work and dine with colleagues.

When I lived in NYC I was a bit better about getting to museums and shows and such, but not by much; Humans can be nearly as single-minded as your wasp queen, I suppose.

JFK is awful. Well, most of it -- the JetBlue terminal and baggage handling there is pretty good, but elsewhere it's awful (slow, cramped). It just occurred to me today, en route to Logan, that Logan, as poor as it is, is actually a much better airport than JFK these days (on the whole). That wasn't true 10 years ago.

I agree that I would not want to commute to southern CT from JFK regularly. An un-scenic, un-enjoyable trip.

I imagine that among the questions every young bee must ask are, "Now when do I get to use my stinger?", or "Please can I sting that guy?".

Also, at the end of every bee's lifetime I wonder if that bee has regrets about not getting a chance to sting. I suppose the young bee who ventures out and ignores the warnings of mom not to sting certainly has regrets as it lies dying. "I should have listened to mom."