Stuff (Specifically Some Shrubs) That You Fall On, And My Sewing-Crush

The berries I posted about in the last post are all products of plants I’ve blogged about previously, but this next berry is something new.

When I started this project I was mainly interested in trees. 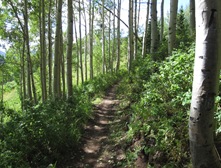 The first year I paid attention to smaller shrubs mainly either in a) the absence of trees, such in desert areas, or b) if they happened to sprout interesting flowers. Last year I started noticing shrubs here in the Wasatch, but gravitated toward the larger, shree-like shrubs. Not really until this year did I start paying attention to the smaller shrubs carpeting the floor of the Wasatch forests.

It’s funny; people hardly ever pay attention to shrubs. Here’s a quick thought experiment: Have you ever been to see the Redwoods? You know, like at the national park, or Muir Woods? Even if you’re completely plant-blind, you know what trees you saw there- (Coast) Redwoods. OK, so what was growing on the ground? This is true even for reasonably tree-aware people. If you went on vacation to say Western Montana or the South Rim of the Grand Canyon or Lake Tahoe and know even a little about trees, you can probably tell me some of the trees you saw, but chances are you’ll come up short when I ask you about the shrubs.

Yet we’re likely to have far greater contact with shrubs than we are trees. Unless you’re Steve Sillett*, you probably never get up in a tree as an adult, but if you spend anytime out-of-doors, you likely brush against, bump into or trip over shrubs all the time. And if you’re a mountain biker, you fall on them.

*Just curious, anybody else read The Wild Trees? If so, didn’t the in-the-hammock sex scene seem a little gratuitous? Don’t get me wrong- I liked the book. Just not sure that part really added all that much to my knowledge of old-growth Redwoods.

My earliest interest in shrubs came from falling on them. Long before I knew anything about plants, I knew there were some shrubs that were better to fall on that others. For instance, in my first month in Utah, I learned to avoid falling on Scrub Oak.

*That reminds me. One of these days I need to work in a Marie Osmond tangent.

Scrub Oak (pic left = Q. gambelii-covered hillside in South Fork of Dry Creek) is one of a Utah outdoorsman’s greatest challenges between 5,000 and 7,000 feet. 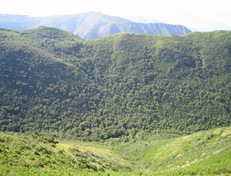 It forms closely-knit, super-scratchy impenetrable thickest/walls that slowly bring you to a halt as they tear at skin and clothing. Frustratingly, they don’t present just a uniform wall, but rather a maze of apparent openings and paths that lure you in or under, continually presenting (real or imagined) glimpses of the far side of the thicket, before closing in on you. These thickets are particularly problematic for know-it-all Type A hikers/bikers like, er, me, who never want to admit they’ve made a bad navigational choice until they are exhausted and bloody and absolutely stuck.

Nested Tangent: Scrub Oak is top of mind for me at the moment. Sunday morning I was mtn biking in Park City with Coryalis, Young Ian and Single Mike*. I was working my way down one of the twisty side trails on Rossy Hill, when an oak twig snagged my brand-new Pearl Izumi cycling jacket….

*No, he’s not a singlespeeder, he’s just single.

I don’t usually buy this kind of high-end cycling wear ($90 retail) but I picked it up on sale (60% off) and found that I really liked it.

BONUS TIP: A great time to pick up bike gear in late August/early September is from seasonal bike shops, the kind that turn into ski (only) shops for the winter. They dump their inventory at the end of the season at or close to cost. There’s one near my office I hit every year. (No I won’t tell you which one because I don’t want you getting there first and buying all my stuff.)

So kind of a bummer, but the story has a happy ending, which is in fact a…

*I’m pretty sure Korean, but I never ask. That whole assuming/guessing-the- wrong-Asian-country thing is a total minefield.

Anyway, she’s fixed all kinds of pieces of clothing and sports-related wear for me- ski-pants, wind-vests, camping gear- you name it. She completed this excellent repair to my new jacket in 1 day for just $5.39, including tax. She is totally awesome*, and I strongly recommend her business.

*In fact I think I am starting to get a little sewing-crush on her. If AW ever leaves me I am going to woo her, win her over and run away with her. Maybe we’ll move back to the old country, wiling away our golden years together sitting on the porch, sewing and snacking on kimchi, as we gaze at the sunset over the DMZ. (I’m kidding over course. Even I know that to watch the sun set across the DMZ, you’d need to be on the North side of it.)

Anyway, Scrub Oak can be problematic. More to the point, it’s not great to fall on/into. It generally won’t break any bones, but it’ll scratch the bejeesus out of you. Whatever you do, close your eyes before you hit.*

*Even with eye protection; the twigs can work their up behind the glasses from underneath.

I never like falling, but when I do fall, my favorite shrub to fall onto is Snowberry, Symphoricarpos spp. 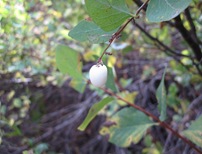 Snowberry is probably the most common Wasatch shrub- particularly in Aspen forests- between 7,500 and 9,000 feet. It’s around 1-3’ high, and has small, ovaloid leaves. When I first noticed it I thought maybe it was some kind of little Serviceberry, or something related to it, but it’s nothing of the sort, not even part of the Rose family. Snowberry belongs to the Honeysuckle family, Caprifoliaceae, which I haven’t blogged about before, but includes things like Honeysuckle and Twinflower (also common in the Wasatch) and is fairly closely related to Valerians. There are somewhere around 15 accepted species, and another coincidental-thing-in-common with Serviceberry is that telling the various species and varieties apart can be a pain. The most common species/variety here in the Wasatch is Mountain Snowberry, Symphoricarpos oreophilus. 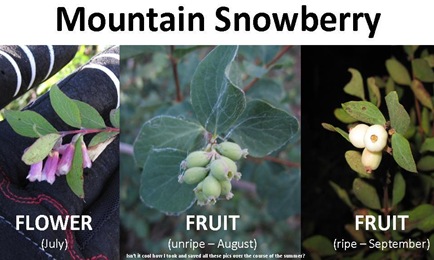 Snowberry grows by root-cloning and forms extensive clonal stands beneath the (also clonal) stands of Aspen. Its foliage and branches are soft and forgiving, making it one of the best things to crash-land into. Back in June it sprouted pretty little pink flowers, but with everything else blooming in June they can be easy to miss. Now they’re a cinch to ID. 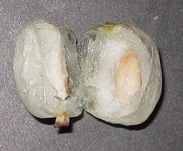 Snowberry is one of the few plants around with truly white berries. They’re actually drupes, but each one has 2 pits (pic left). The “berries” are a prized food source for all sorts of birds- grouse, grosbeaks, robins- but probably not for us. Though technically edible, they supposedly taste like soap and are toxic in quantity, inducing everything from diarrhea and vomiting to lethargy.

Extra Detail: There’s a better reason not to eat them-

you might confuse them with other white berries, which are overwhelmingly inedible/poisonous. An old rule-of-thumb I’ve heard (for which I can confirm neither source nor veracity) is that 90% of white berries are poisonous, while 90% of blue berries are edible. Red berries are 50/50. Another Utah native with white berries BTW is Poison Ivy.

Tangent: Snowberry is a good plant to be able to ID in the Wasatch because it’s sort of a “key puzzle piece” in the Aspen forest understory. Before I recognized it, the understory was a whole bunch of stuff I didn’t recognize interspersed with things here and there that I did recognize. After I learned to recognize Snowberry, the opposite seemed to be true.

There are of course lots and lots of other shrubs in the Wasatch; another common one that’s also OK to fall in is Tobaccobrush, Ceanothus velutinus. Tobaccobrush also grows in clonal stands, a little taller than Snowberry, usually 2-4’ high. 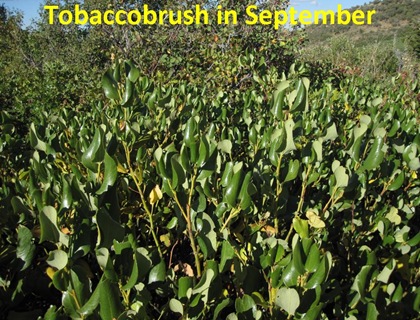 It does well in open, sunny exposed spots, on dry rocky outcrops and/or on gravelly soils. The leaves are shiny, waxy and tough. Its common name supposedly comes from its past use as a tobacco substitute. In the early summer it produces large bunches of delicate tiny white flowers, lending to another of its common names, Snowbush.*

*Which I avoid using due to possible confusion with Snowberry. 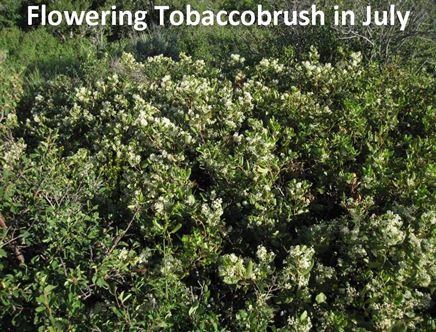 It doesn’t produce berries of any sort, but rather a small dry capsule, with lobes containing the seeds. Its leaves appear to be practically inedible to cattle. Deer and Moose eat it, though it’s not their first choice. 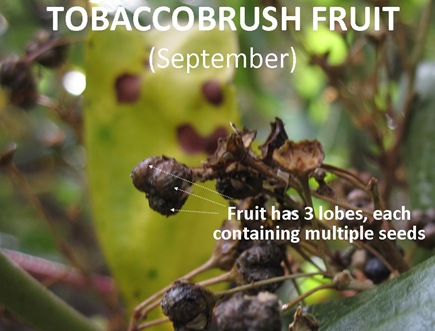 Ceonathus is a genus of ~60 species in the Buckthorn family, Rhamnaceae, all native to North America, and there are several interesting things about it. The first is that the center of its evolution appears to have been California, where the greatest diversity of species exists. Over millions of years populations have diverged, speciated, spread East, North and South, and then in some cases hybridized as they’ve later re-encountered one another. It’s a wonderful example of the botanical fantastic-ness that is California.*

A second interesting thing is that it’s well-adapted to fire. Burnt to the ground, Tobaccobrush quickly re-sprouts from its roots, and is often the first colonizer of burnt ground. Its seeds will only naturally germinate following a fire; you can force germination by boiling seeds for a few minutes. 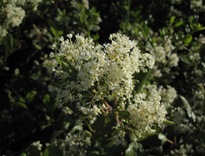 But here’s the cool thing: the amount of time for which you need or can boil seeds to induce germination varies not only by species, but by population. In other words, a heating time/temperature that would be ideal for the seeds of one population might well kill the seeds of another population and yet be insufficient to induce germination in yet another population. Different Ceanothus species and populations are adapted to different wildfire intensities, which means that as climatic and fire conditions changes over thousands or millions of years, different species/groups will fare better or worse, expand or decline in range, possibly encounter other species, hybridize, etc., etc. The seeds BTW can remain viable for more than 20 years, depending on the species. Also BTW, Ceanothus species, including C. velutinus, are nitrogen-fixers (which I explained in this post), which aids in their role as pioneers in burnt or disturbed areas. (I guess this is a 4th cool thing.)

The third cool thing about Tobaccobrush is that- like Curlleaf Mountain Mahogany or Creeping Oregon Grape- it’s an evergreen angiosperm in the Wasatch.

In cold conditions, not just in winter, but on cool mornings, the leaves will be rolled up in little tubes, like Rhododendron leaves. Late, late in the fall, when all the other leaves are gone, stands of leafy Tobaccobrush will remain on outcrops and ridges, islands of dull green in a sea of brown. And just a few months from now, in the dead of winter, when you ski or snowshoe across windswept rocky peaks and outcrops, you’ll sometimes see its dark leafy branches poking out of the snow, a little reminder of the green world sleeping below.