Summer! Winter is nice and all, but what I daydream about back in January and February is this:

Zipping through a shady forest of endless white Aspen trunks is the sweetest part of living at the foot of the Wasatch.

Over the next couple of months, blooms of wildflowers will appear and wane like waves of color washing across the forest floor. Within a week or so, Columbines will start popping up, and as they quickly wilt Wild Rose, Arrowleaf Groundsel and Sticky Geraniums will flower, the latter dominating the forest floor by late July. The Serviceberry bloom has passed 8,000 feet and will soon crest, so be followed first by Chokecherry, then Ninebark and Elderberry. Two months from now the same forest will be sprinkled with Showy Goldeneye, Aster and Paintbrush. When I think about it, I don’t know why a) anyone lives anywhere else, or b) why everyone in Salt Lake Valley wasn’t up in the mountains on Sunday.

Side Note: Speaking of the Serviceberry here’s a clip of descending* through a nice blooming stretch around 7,700 feet.

(Aborted) Tangent: I started a tangent here but canned it, not because it wasn’t a good topic or was too controversial or anything, but because the follow-on to point b) above gets into a whole motivation-direction-meaning/purpose of life thing that I’m not ready to tackle at the present moment. The “present moment” in this instance being my hotel room in San Jose, California, where, as soon as I am done with this post, I plan to flop into bed, watch an episode of South Park, and go to sleep.

Nested Tangent: Which reminds me- I have this awesome new “theory I call the South Park Theory, which states that the best window into someone’s true inner character, beliefs and overall world view is their favorite South Park episode.

*Mine’s the Critter Antichrist episode. OK I might be over-sharing here.

Yes. that’s my guilty hotel-pleasure. No, not the South Park part- I watch that whenever I can. The TV-in-bed part. We don’t have that- a TV in the bedroom* at home.

*And neither should you. Wish you and your spouse had a better sex life? Get rid of the TV in the bedroom. You think I’m being snarky, but it is a fact. Poll your married/partnered friends. Your good friends. Your Friends-Who-Will-Tell-You-How-Often-They’re-Having-Sex-Friends**. Then ask those same friends if they have a TV in the bedroom. You’ll be like, “Wow, that Watcher guy was totally spot on. He must really know something. Maybe I should start paying attention to his plant posts…”

**What’s that? You don’t have any friends you can talk with about that kind of stuff? You need new friends.

The weekend before last AW and I did a rainy hike up in Park City. Alongside the trail I noticed tiny spots of color, miniscule flashes of white on spindly stalks rising from the forest floor. In the week+ since I’ve been seeing them everywhere, another one of those little things that’s invisible till you see it, and then suddenly it’s everywhere. 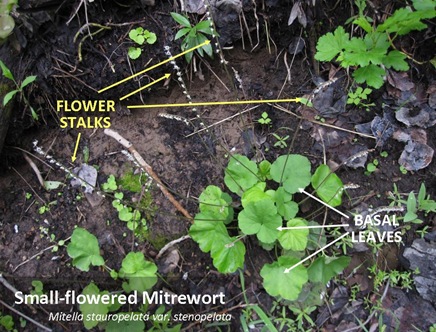 It’s Small-flowered Mitrewort, Mitella* stauropetala, also called Side-flowered Mitrewort, for reasons we’ll get to in a moment. Mitella, the Mitreworts**, is a genus of ~12 species native to North America and Asia that have teeny flowers, and grow low to the ground in moist spots in the forest. Mitreworts have a curious and dramatic form that would be more striking if they were larger: the round-ish leaves form a low, maybe 4-6” “canopy” 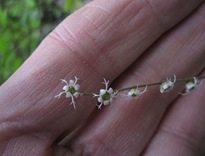 above the ground, while the flowers are borne on tall, leafless stalks rising up 12-16”. Imagine if Ninebark or Wild Rose bore its flowers on 15-25 foot high agave-like stalks that towered far above their main bushes; that’s a Mitrewort.

*I got the family right, but struggled on the ID till Sally pointed me to the genus. Thanks, Sally!

**The “mitre” in question refers to a bishop’s traditional hat***, to which the flowers of some species supposedly bear a resemblance. (I don’t see it.)

**Note to Utah readers: I mean a traditional, European-type bishop’s hat, like that of a Catholic or Anglican bishop, not a baseball cap with a big “Y” on it.

Mitreworts belong to the Saxifrage family, Saxifragaceae, and so are more closely-related to Woodlandstars and Wax Currants than most anything else around that we’ve looked at. 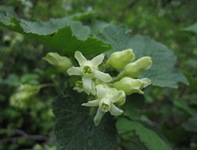 Side Note: Woodlandstars are already blooming everywhere between 7,500 – 8,000 feet. And Wax Currant, Ribes cereum, is blooming right now (pic right) at the same elevations. I’ve blogged about this shrub before (last summer in the Henry Mountains), but this is the first year I’ve noticed it blooming in the Wasatch. Wax Currant has a leaf that’s very similar in shape/form and size to that of Ninebark*, and grows in similar, shady, forest-floor environments. But the flowers, though both white, are very different in form, so this is an easy time to pick the 2 shrubs apart. Once you do, you’ll notice that the leaves, while similar in form, have very different finishes; Wax Currant leaves are more “crinkly” in appearance, and are covered with tiny little hairs. 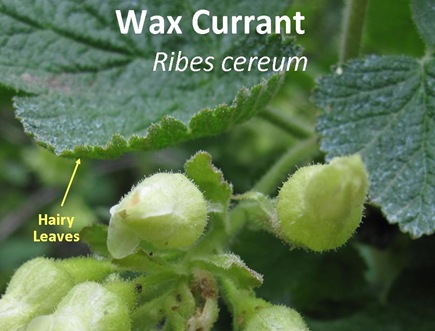 *Result of convergent evolution, as these 2 shrubs are not at all closely-related. Ninebark is more closely-related to Apples or Pears, and Wax Currant to Magnolias. 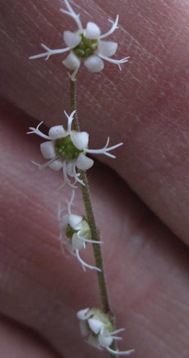 The “side-flowered” moniker comes from the tendency of all flowers to bloom on the same side of the stalk, a trait peculiar to this species and which can be used to help distinguish it from other Mitreworts.

M. stauropetala ranges across the Pac-Northwest and down the Rockies into Utah and Colorado. But there are 2 varieties of the plant; ours, var. stenoplata, has slightly smaller-flowered than the common Pac-Northwest, var. stauropelata. And the origins of our variety aren’t entirely clear; it’s suspected that var. stenopelata may be the result of a past hybridization event between var. stauropelata and M. trifida, Threepart Mitrewort, a species occurring over much of the same range.

Extra Detail: Goshute Indians used the roots of M. trifida to brew up an infusion they used to treat colic.

If so, SF Mitrewort would be another great example of a hybrid origin of a pretty common Wasatch wildflower. Longtime readers may remember that 2 years ago we looked at a super-ubiquitous likely example of such a past hybridization event- Cutleaf Balsamroot, which BTW is in massive bloom all over the place.

Besides the Balsamroots, SF Mitrewort has something in common with another group of plants we looked at more recently- the Yuccas, in that it also has a dedicated moth-pollinator which is dependent upon it for reproduction. The moth Greya mittellae lays its eggs exclusively in SF Mitrewort flowers, and pollinates them in so doing.

Extra Detail: To be sure, the Greya-Mittela story isn’t as fantabulous as the Tegeticula-Yucca deal. The Greya moth doesn’t make any kind of a special side-trip to effect pollination, and, although the moth is wholly dependent upon the flower, I believe that SF Mitrewort is also pollinated by syrphid flies and Osmia bees, (though I came across conflicting pollination info in my research and can’t confirm this for certain.) 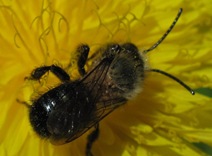 But it’s still a cool story. Yucca Moths and Greya moths, BTW are fairly closely-related, both belonging to the family Prodoxidae.

Oh, BTW, I finally got a half-decent Osmia shot (pic right) this past weekend. Check out the pollen grains all over her.

So it’s an interesting little plant, with an appealing form and a cool story, but that’s not what I really catches my eye about it. No, what I absolutely love about SF Mitrewort is the phenomenal beauty of the flower. Check this guy out (pic, below right). If these flowers were the size of Balsamroots or Columbines they’d be considered, hands-down, one of the most spectacular flowers in Utah. 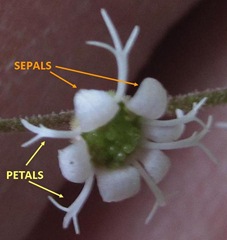 The architecture is lovely. The broad, round-ish “petals” (usually 5, sometimes 6 of them) are actually sepals. The true petals are those long, tripartite white stalks are the true petals. Following pollination, the (true) petals soon drop, but the sepals linger a while longer. Later in the season, the sepals too will drop, leaving behind little cups bearing tiny black seeds.

After 2 years at this project I’m still finding new wildflowers, but if you’ve followed this blog for a while, you’ve probably noticed that the more recent flowers I’ve posted about- SF Miterwort, Utah Buttercup, Spring Whitlowgrass, Star-Flowered False Solomon’s Seal- tend to be smaller. These are the flowers I missed the first year or so when I was smitten with the bigger blooms. I sort of feel like this year I’m filling in the “white space”, or I guess “green space”, of my mental map of Wasatch forests.

I laughed at the bishops hat crack.

The MidMountain video was sweet. I gotta get up there.

I can also attest to the steepness and trickiness of Finesse. I *almost* cleaned it, but dabbed at that final left corner. The cred I may have earned with Watcher, dashed.

That Miterwort is a lovely little flower. You need to dip it in toxic waste (or run it out to EnviroCare - is there a better white-wash corporate name?) to make it 10 times bigger. Then you can quit the sale gig and grow flowers for a living.

Yes, I can vouch. On the steepness/difficulty of the trail, and on the TV in the bedroom thing (we don't have one, nudge, nudge, wink, wink).

Oh, as for the Bishop's hat, well one time I was in La Guardia airport and saw a guy wearing a blue baseball cap with a Y on it. I thought, "wonder if he went to BYU?" So I walked over and asked him.

He gave me a disgusted look and said "Yale. I don't know why they do that."

"They" being BYU, and "that" being put a "Y" on their caps. As if Yale had exclusive rights or something.

That is a most beautiful flower!