Several days back, the Hunky Neighbors had us over one evening for dessert. The adults were inside chit-chatting, and the younger kids out front playing, when Bird Whisperer, who was hanging out by himself on the rear patio, called me out to check out a spider he’d found.

Tangent: Our circle* has 2 other families with kids the Twins’ age. But Bird Whisperer is the oldest kid on the circle by 2 years. His nearest same-age friends live at least a mile away, so during these neighborhood get-togethers, he by and large does his own thing. Which works out fine, because he’s a patient, good-natured and introspective little fellow, filling his time reading, playing make-believe and poking around at things like birds, and of course, spiders.

*By “circle” I mean the actual circle/cul-de-sac/dead end on which we live. I don’t mean circle as in “social circle”.

It was an interesting spider, and very unlike the typical Wolf, Triangulate Cobweb and occasional Black Widow I’ve found around house and garage, so I had BW keep it corralled while I sprinted next door for the camera. Orange body, almost hairless, I figured it would be easy to ID when we got back home, and it indeed it was. It’s Dysdera crocata, known as either the Woodlouse Spider, or, even better, Sowbug Killer. 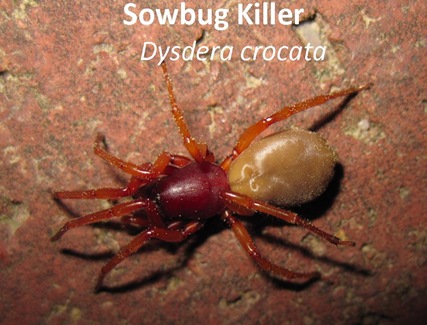 Oftentimes in this project I’m forced to choose between competing common names when blogging about something or other. Usually I try to use either a) the name I knew already, or b) what seems to be the most commonly-used common name in the Western US. But whenever one of the candidate common names has the word “Killer” in it, that automatically beats out all other candidates. So Sowbug Killer it is, or SKiller for short.

It turns out that the SKiller has a really cool story. First a few basics. SKillers are nocturnal, running hunters. They don’t spin webs, but they do spin little silk nests or “cocoons”, located under rocks or logs or bark in which they pass away the daylight hours. Come nightfall they emerge and run around over patios and such hunting their favorite prey, that being- you guessed it- Woodlice (also called Sowbugs, but here I’m following rule “a”.)

So one of the first interesting things about SKillers is that they’re exotic. Dysdera is a genus of over 200 species, all of which are native to the Mediterranean region and the Atlantic Islands off the coast of North Africa. Of those 200+ species, 1- just 1- D. crocata- is cosmopolitan* in distribution. The distribution of Dysdera spiders, and how it came to be that just 1 species colonized the world, turns out to be way fascinating, but before I tell it, we really ought to spend a moment or two on their prey.

* I am embarrassed to admit that before I started this project, I didn’t realize that the word “cosmopolitan” could be applied to non-human creatures. But of course it can, as it means that something- a spider, a plant, a bird- can be found practically worldwide. I always assumed cosmopolitan simply meant a person who was multi-cultural, or somehow transcended traditional boundaries of culture and/or nationality. Either that or a scantily-clad female on a magazine cover at the supermarket check-out.

I’ve mentioned woodlice a couple of times in this blog; they’re so common it’s hard not to. When we last saw them was last November in my garage, where we left them on a somewhat uncertain note. 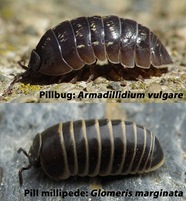 Woodlice are crustaceans, like lobsters and crayfish, but they bear a remarkable physical resemblance to Pill Millipedes, which although not at all closely-related have evolved a remarkably convergent body form, complete with an independently-evolved ability to roll into a defensive ball, protecting their vulnerable undersides. And I left them admitting that while I suspected my garage denizens to be Woodlice and not Millipedes (based on the configuration of the exoskeletal plates toward the rear end), I wasn’t really sure.

Well now I am sure- they’re Woodlice, specifically Armadillidium vulgare, the Common Pill Woodlouse. Here’s how I know:

In this close-up photo of the underside of one, you can see that there is 1- and only 1- pair of legs per body segment. Millipedes have 2. And there are exactly 7 pairs or legs, as is always the case with Woodlice. 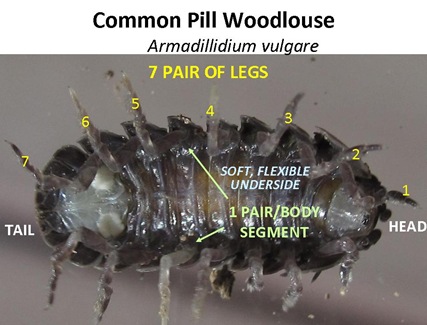 Tangent: The specimen for this Woodlouse photo was provided by Twin B, who is diligent, reliable and fearless when providing invertebrate specimens, with the one notable exception I have mentioned before- spiders. I swear, with any other bug- Woodlice, flies, Box Elder Bugs, beetles, ants, moths, whatever- she’s like this little Gandhi, always carefully handling them and then releasing them outside, never swatting or killing them. Only spiders freak her out.

A. vulgare is, like D. crocata, an exotic* in North America, native to Europe. It’s sort of as if predator and prey have chased each other around the world.

*When I started this project I already knew that many, many plants and birds around me were non-native. One of the surprises along the way has been how many bugs are exotics as well. Just in my garage Woodlice, Triangulate Cobweb Spiders and Paper Wasps have been 3 recent examples.

There are some other great things we can see in this shot. Toward the rear can see a number of whitish plates in the center between the 6th and 7th leg-pairs. These are pleopods, which are actually modified gills, which leads to probably the most interesting thing about Woodlice- They’re the only crustaceans* that have fully adapted to life on land. And though they’ve adapted well, they’ve done so differently than other invertebrates that emerged from water onto land, such as insects and spiders.

*Specifically, they’re Isopods, which are an order of crustaceans with 7 pairs of legs.

Woodlice never evolved the waterproof waxy cuticle that keeps things like insects and spiders from dehydrating, so drying out is a constants threat to which they’re adapted in several ways. Many of these ways are behavioral; Woodlice avoid direct sunlight and favor damp, moist places. Pleopods need to remain moist to function, as in gills the gas-exchange occurs across a wet surface. But they’ve also evolved a few tricks, including the ability to routinely withstand and fully recover from up to 30% dehydration. (Humans are generally dead by 15% dehydration.) More impressively, they can absorb water vapor directly from the surrounding air at humidity levels of greater than 87%. Hardly any other animals* can pull off this trick at less than 100% humidity. 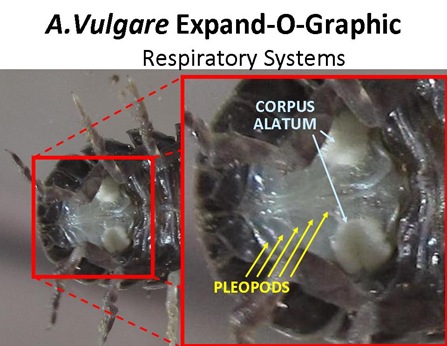 But a number of Woodlice species, including A. vulgare, have also evolved additional “dry-land” lungs to augment respiration, and these, called the corpus alatum, are also clearly visible in the photo. The corpus altum is a system of pseudotrachea, so named because they are vaguely similar to trachea, which in insects deliver oxygen directly to tissues, but work a bit differently, delivering oxygen to the “blood” (or rather the Isopod version of it) which then carries it to tissues throughout the body.

Tangent: There’s something really cool to think about here. As large verterbrates, most of us have some knowledge of the whole fish-evolving-its-way-onto-land thing through the evolution of primitive “lungs” (probably from a modified swim bladder) and modified lobefins, and the eventual evolution of reptiles, from which things like mammals and birds came about.

But invertebrates- “bugs”- obviously worked their way onto land separately, and what’s interesting is that different groups of arthropods did so independently and came up with dramatically different ways of surviving on land. We’ve already looked at the radically different respiratory architectures of insects (trachea) and spiders (book lungs). Woodlice represent a third way of evolving a terrestrial respiratory system (pseudotrachea). This is one of the things that fascinates me about evolution, that nature comes up with so many different ways of solving the same problem. And yet in so many cases they end up- like Pill Millipedes and Woodlice, like Old & New World Vultures, like Old & New World Porcupines- amazingly similar things that came to their respective “thing-ness” via completely different paths.

When I thing about all of the examples of convergent evolution here on Earth, I sometimes figure that if life exists elsewhere in the universe, for sure it has pillbugs and vultures and porcupines. But then I think about trachea and book lungs, and I suspect I don’t have any idea what life elsewhere would be like…

Before leaving our Woodlouse friend, there’s something else about him we can tell from this photo. And that’s right, I said “him”, for this A. vulgare is male. Males have elongated, curving, backward-pointing first and second pleopod pairs, which guide the transfer of the sperm packet when mating, which he deposits at the base of the female’s pleopods while crawling across her back. 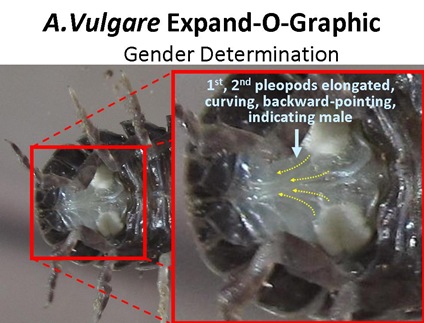 The entire underside of the Woodlouse is obviously soft and thin- translucent even- compared with the hard armor covering its top/backside. The soft exoskeleton provides flexibility for movement but represents a vulnerable area, which is why these guys roll up into a ball when threatened. The obvious challenge for anything that wants to eat a Woodlouse- say a SKiller for example- is how to get at the soft underside.

Which brings us back to…

Next Up: The Spider, Already!

You pulled me into this cool bug story and then ... a cliffhanger? That's just mean. Well, at least I won't have to wait long for the rest of the story (unlike movies).

Our yard is loaded with pill bugs. It would be a feast for a Sowbug Killer.

BTW, about how big is the Sowbug Killer?

Sorry about the cliffhanger, I'd been meaning to do a woodlouse update for a bit, and I maybe got carried away...

I'm with KK on the cliffhanger. First I was bracing myself for a mega long post. Then it was over right when I was getting excited about the how to open sowbugs part.

BTW, we always called them potato bugs growing up. I have no idea why. I'm not sure what my kids call them. I'll have to find out--I'm sure it's whatever their friends call them, as that's how I came to potato bug.

Regarding Twin B's creepy crawlies: I think there is something genetic (evolutionary baggage if you will) about human creepiness towards spiders. The way they move gives me and many other people the heebie jeebies in a way that six legged insect simply do not. Any ideas on the source of this? Were spiders in the past simply much more deadly? Does their motion remind us of other more deadly, large predators? I am not sure of the source, but I think I am on to something here.

Hi, here from Italy.... Just found this spider, skiller as you call it in my living room, but about the sowbugs I thought I might mention that they really useful as they adsorb heavy metals from the ground and so have a purifying quality.