I’m traveling for work this week, hoping to work in part 3 of the Idaho vacation series, but having trouble carving out time. I’ve been traveling a lot lately, back down in the Acid Swamp last week, San Diego this week, and Boston next week, but hopefully I can wrap it up later this week or over the weekend.

In a comment to Part 2, KB was kind enough to alert me to a mis-ID*: my “pinedrop” was actually Spotted Coralroot, Corrallothiza maculata. There are 3 upsides** to this error. First, Pinedrop is way cool and totally worth blogging about; I’m glad I did so. Second, the Coralroot story is remarkably similar. It’s also a non-chloropyllous myco-heretroph. It’s associated with a single family of fungi, in this case, Russulaceae, which, like Rhizopogon, is mycorrhizal. So far so good.

*As I’ve mentioned previously, I welcome corrections. I make mistakes all the time. I’m not a botanist, zoologist, entomologist, zoologist, ornithologist, geologist, hydrologist, astronomer, or any kind of an expert on anything*** covered in this blog, and over 90% of the stuff I blog about is stuff I learned about the thing in question over the previous week. Though I do my best to get the facts straight, I don’t sweat it when I don’t. I have a day job. In fact I have several posts (particularly from year 1) where I have pretty major errors that I have it in my mind to go back and clean up sometime, but don’t know when I’ll get around to it.

**I am so glass-half-full it almost hurts…

***And really, I’ve never been an expert in anything- not my trade or hobbies or anything else. Yet my life has worked out just fine. If I were to start this project all over again from scratch, perhaps a better name for the blog would be “Perpetual Amateur.”****

****Blogspot url is already taken. Just snagged it over on Wordpress. You know, just in case…

Extra Detail: Something interesting about Russulaceae is its mushrooms, in which the stalk is comprised of spherical cells, unlike the stalks of most mushrooms, which are comprised of long fibers (hyphae). Because of this the stalks snap cleanly, and often with a crack, like a carrot.

Third, the error provides yet another- and this case absolutely fascinating- example of one of my pet loves in this project- convergent evolution. Pinedrop, as I mentioned in the last post, is a member of the Heath Family, Ericaceae, which in turn is a dicot (eudicot) family.

Coralroots (and there are over a dozen species, mostly native to the New World) belong to the Orchid family, Orchidaceae, which is a monocot family. In other words, these 2, remarkably similar-looking plants, which occur in like habitats, evolved non-chlorophyllous myco-hetermorphism completely independently. Pinedrop is more closely related to Oak or Cactus, and Coralroot more closely-related to Crabgrass or Joshua Trees, than either is related to each other. The two haven’t shared a common ancestor since probably the early Cretaceous. And yet, ~100 million years later, here are their descendants, pulling off practically the exact same schtick! Isn’t that incredible?

On the downside, I missed a great chance to blog about Orchids, something I’ve had in the back of my mind to do for over a year now. The 2 most diverse families of flowering plants are the Sunflowers (Asteraceae) and the Orchids (Orchidaceae), both of which have well over 20,000 generally accepted species. The success of, and diversity within these 2 families is stunning. I’ve said before that angiosperms long ago conquered the world, but one could almost say that Sunflowers and Orchids have conquered the world, with the rest of us just along for the ride.

Sunflowers I’ve done a half-decent job with, covering many examples and the family in general. But Orchids I just haven’t gotten to yet*, somewhat to my chagrin, because Orchids are fascinating, beautiful and wondrous, with thousands of amazing

stories. I’m also charmed by the wonderful symmetry of the successes of the 2 families- one monocot, one dicot- and their clear testament to the fabulous success of two fundamentally different ways of being a plant. Clearly, orchids need to be blogged about.

*I considered tackling them a year ago in Costa Rica, but felt that the trip was too quick and my sightings too spotty to a good job of it. More recently I’ve intended to blog about White Bog Orchid, Habenaria dilatata, which I believe I’ve spotted in passing a few times…

But not this week. Not in a sleep-deprived-hotel-room-cranked-out-filler-post. So I’ll wait for another day. But I can’t resist touching on just one very relevant aspect of orchids, which is that if anything, they would seem to be perhaps even better suited for, or at least more inclined toward, myco-heterotrophism, in that all orchids begin life as myco-heterotrophs.

Orchid seeds contain no endosperm*. In order to germinate, they must obtain nutrients from fungi, and so an orchid seed cannot start growing unless it lands where a suitable fungus lives. After successful germination, the orchids get along photosynthesizing and such like most other plants, which exceptions like the Coralroots.

*I explained endosperm in this post. (The post may contain a minor error, highlighted by Enel in the comments, which I haven’t yet had opportunity to recheck. The post should otherwise be pretty solid.) Interestingly, horticulturalists are able stimulate orchid seed-germination without fungi, using nutrient-rich gels. Most orchids, BTW are epiphytes; I assume they get their start from fungi growing on trees.

So Coralroots, and other adult-myco-heterotrophic orchids, can be considered almost neotenous in the sense that they retain the seedling lifestyle into adulthood.

Anyway, cool plant. I learned something from the error.

I mentioned earlier that I’m in San Diego this week, here for my company’s annual user conference. I’ve been doing this conference for 9 years now, and I’ve done blog posts the last two years related to various tree-hunting adventures I’ve worked in on the side. This year’s conference, for reasons I can’t get into here, will most certainly be my last. I didn’t make it up to the mountains this time, but I made it to the beach.

Last Wednesday I spent the day in my company’s Ft. Myers, Florida office, my 3rd trip there in as many months. On neither previous trip did I ever see the ocean; it was too far, not enough time, etc. But recent events got me thinking that I’d never been to a US beach on the Gulf of Mexico, and that if I didn’t go soon, it might be the case that such a visit may not be possible again in my lifetime*. So at 6:30, when I finally wrapped things up at the office, I jumped in the rental car and headed West.

*I’m talking of course about the BP spill. Though it looks like it might be resolved, there were a few weeks where I wondered if might be uncapped for years…

It was 7:30PM when I arrived at Ft. Myers beach, still warm and humid, but the sun low enough that I could walk comfortably across the beach parking lot barefoot. When I reached the sand, it was the softest I’d ever felt beneath my toes. Fine, white, almost talc-like. About 20 feet from the water the sand turned slightly damp, and hard, like pavement. I could see a couple of tracks where bicyclists had passed easily. It was unlike any sand I’d ever walked on. 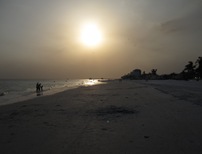 When I touched the water I almost laughed. Warm, almost bath-like, if it had been any hotter out it would’ve been unpleasant. I waded in and was pleased to find that the baby-soft sand continued out underwater. I waded out probably 50 feet to waist-deep, then dove in. I floated around on my back for 15 or so minutes, watching the sun grow fat, low and orange. I mused that 2 rather crappy things- an oil spill and work travel to South Florida in July- had somehow led to me experiencing this totally cool beach, which I’d otherwise likely never have sought out. 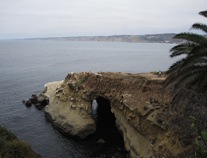 Monday I was in San Diego with a few hours to kill. Again in a rental car, I pulled off I-5 on La Jolla Blvd. As I’ve mentioned previously, I was born in La Jolla (though have no memory of it) and over the years have stopped by there from time to time. I ate a sandwich overlooking the cove and the underwater park, thinking wistfully that I should’ve brought along a swimsuit, or figured out where to get some snorkel gear, or maybe even do a dive. I gawked at the Sea Lions for a bit*.

*Also worth a future post. I’m absolutely fascinated by the evolutionary paths of marine creatures with terrestrial ancestors, and especially by the apparent “in-between-ness” of pinnipeds.

Then I sat and stared for a bit, thinking about changes over the past year, and of those coming in the year ahead, while watching the passing flocks of pelicans*. Their flight seemed to hint at patterns I couldn’t quite catch, like whispers in the rustling of aspen leaves.

*Which I’ve mentioned in Utah, Mexico and now California. Need to do a post on them too.

I took the slow route back down to the city,

hugging the beach. In the honky-tonk sprawl along Mission Beach, I passed a shop advertising cheap swimsuits. 10 minutes later I was walking barefoot on sand, this time beige and coarse-grained. The water was cold, probably 65F, and not especially inviting, but it may be a while before I’m on a Southern California beach again. I tucked my head and dove into my second ocean in 5 days.

I love San Diego! My favorite place to take in waves is La Jolla Cove, which has the same course sand as Mission Beach. I was swimming at La Jolla Cove last month and was approached by a couple young seals, who swam about 5 feet away from me for a good while. Good stuff, have fun!

Growing up in So Cal, I was very surprised at the difference the first time I went to the beach in Ft Lauderdale.

I hate swimming in the murky, cold So Cal ocean, but became a fish in the clear warm waters of Hawaii. What's up with that?

Also interesting to me is how fast this oil is disappearing in a warm ocean with lots of micro-organisms and UV exposure at the surface anyway.