Last night Bird Whisperer and I drove up after dark to the top of Emigration Canyon to check up some stars for a couple of Astro-Posts I’m hoping to do this week*. A big wildfire was raging down in the South end of the valley, obscuring the sky with smoke.

*Here’s a great tip. If you are the parent of a kid approaching puberty who is showing the typical signs of being-more-into-his-own-thing**-than-hanging-with-Dad/Mom, a great thing you can do together is go stargazing after his/her designated bedtime. BW was way into it; we’ll probably head up again tonight.

**Which right now is- I am embarrassed to say- Dungeons & Dragons***. He’s obsessed with it. To be clear, he’s had obsessions before- he’s sort of a Serial Obsessive. First was Thomas the Tank Engine, then it was dinosaurs, then it was wild animals in general (mainly carnivores), then Pokémon, then Yugi-Oh!, then birds, then back to dinosaurs, and now D&D. But this D&D obsession seems deeper than any of the previous ones. Oh well, as AW points out, the upside of your kid being a D&D geek is you don’t have to worry about him getting anyone pregnant anytime soon.

***Full confession: I was a D&D nerd for a couple of years, though my obsession didn’t start till around age 15. I was into it until I got a motorcycle and a girlfriend.

Though we only climbed ~1,400 feet, it was enough to put us up above the bulk of the smoke. Here are contrasting shots of the moon from our back yard, and then 20 minutes later at the head of the canyon.

Side Note: Yes, I know these shots suck. That’s not the point. The point is the color. Isn’t that “Fire Moon” wild? What’s interesting BTW, is that my daytime-only camera was better able to handle the contrasts with the muted “Fire Moon” than the (relatively) un-obscured moon. On the “Fire Moon” shot you can make out actual features on the lunar surface…

Anyway, stay tuned for a couple Astro-posts this week.

Also, while I’m doling out filler, I’ve decided that the Wasatch f 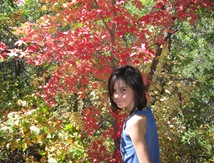 oliage this year is so freaking spectacular that I’m going to include gratuitous foliage shots and clips in my posts whenever I feel like it, completely a propos of nothing (pic right = Twin B in front of Bigtooth Maple Sunday @~7,500 ft). In Friday’s filler-post I mentioned the colors of the forest understory. Especially stunning in spots is the contrast between the typical understory yellows and the occasional blood-red of the Ninebarks. Usually the reddest thing is the Wasatch right now are the Bigtooth Maples, but occasionally the Ninebark will outshine even them, with a deep, blood-red unmatched by any Maple. When you encounter it trailside contrasted with yellow- such as in this patch mixed with Snowberry (along the West Perimeter trail in Pinebrook) it’s fantabulous. 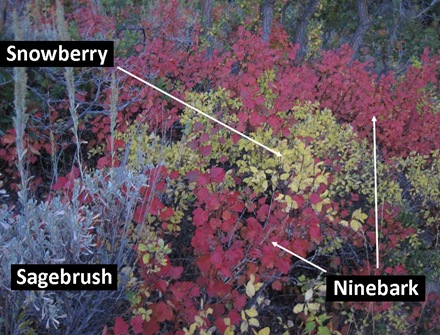 Later in the same ride, I caught this nice helmet-cam clip toward the bottom of “X” trail*. Pay attention (and play it in high-def/720p) - golden maple leaves are floating down onto the trail as I ride through.

*”X” is really what we call it- I’m not being coy about the name or anything. Many of the Pinebrook trails my friends and I have named ourselves over the years, as we’re ignorant of what “real” names, if any, they may in fact have. The “X” in this case refers to the X-like junction with Mid-Mountain trail, visible at the very end of the clip.

Next Up: Back to the sky!

"Oh well, as AW points out, the upside of your kid being a D&D geek is you don’t have to worry about him getting anyone pregnant anytime soon."

Since I've been trapped in construction hell for weeks and have not been on my bike since August, I am eternally grateful for and jealous of your clips of the fall colors. Thank you.