I left work early afternoon Wednesday in hopes of making it to the Tuckup Canyon trailhead somewhere around dusk-o-clock. I knew this was pushing it given the shorter days of late, but well, you know, maybe I could get almost there in the daylight…

South, south I drove, past Fillmore and Beaver, dropping into the Mojave South of Cedar City, then climbing back out of it leaving Hurricane. I passed the JEM trailhead, drove in between Gooseberry and Little Creek and into 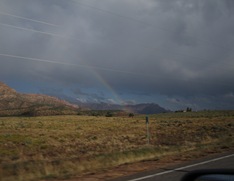 Arizona (pic left= rainbow just across AZ border). At the Mt. Trumbull Road turn-off I stopped and looked around. I had at least 55 miles of dirt ahead of me, and it had been raining hard on and off for most of the past week. The Arizona Strip- the hunk of land between the Grand Canyon, Kaibab Plateau and Utah border- is one of those places that that you mainly pass through to get to someplace else. It’s mostly rolling scrubland that rises in places high enough to break into Piñon-Juniper woodland. Out of the distance a truck, looking pretty muddy, rumbled up the road. I flagged down the driver and asked him about the road conditions. He’d come from one of the ranches ~40 miles South and assured me it was OK that far.

Still in cell range, I texted Arizona Steve, who was driving up from Phoenix. 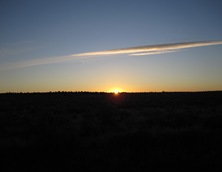 He texted back, indicating he was 2 hours behind me. The sun was low, the roads wet, and my maps/directions to the trailhead fairly sparse. The right thing to do would’ve been to hang out for 2 hours and drive in together. But I had visions of relaxing at the trailhead, sipping a beer and watching the stars. I started up the Watchermobile and headed South.

2 hours, ~50 miles, ~20 turns, one 90-degree spin-out and maybe 40 mud-bogs later I was still seated in the Watchermobile, but now in the pitch dark, stuck in the mother of all mud-bogs*, an unknown distance from the trailhead, and long, long since out of cell range. I won’t go through the whole blow-by-blow of how I wound up there, except to say that it was the cumulative result of countless “Well, let’s just push on down this fork a little bit further…” type calls which in retrospect were just one bad decision after another.

*I explained why the mud of clay-y soils is so problematic for wheeled vehicles in this post.

Tangent: The sad thing about all this is that I have been in this situation repeatedly. We- all of us- have a weakness. Something we know we shouldn’t do, that never turns out well, and that we swear after we do it we’ll never do it again, but then find ourselves doing it again some weeks/months/years later. For some of us it may be something as simple as drinking red wine with chocolate, or getting back together with an ex-girlfriend/boyfriend or going on yet another vacation with our in-laws because, well, it’s just such a “good deal.” For others it may be going to work for yet another Gonna-Make-It-Big-dot-com or voting one more time for Orrin Hatch. For me it’s 4-wheeling through strange country at night. All of my 4-wheeling mishaps have occurred in strange country at night, and I always tell myself I’ll never do it again, and then of course I always do. 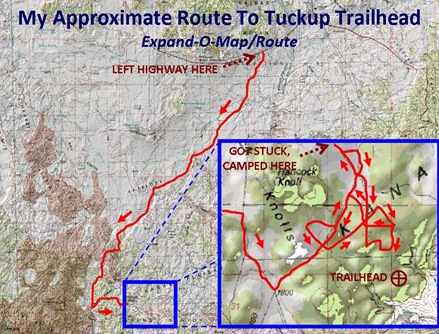 After a few tense minutes I managed to ease back out of the bog. That was it- I was done for the night. Either I was on the right route- in which case Steve would come upon me in a couple of hours- or I wasn’t- in which case pushing further would only lead to more problems. I backed up a ways, pulled out onto the sage, and killed the engine.

Stepping out of the Watchermobile I was struck immediately by the scent of wet sagebrush and the spectacular star-packed, moonless sky. Determined to make lemonade out of lemons, I pulled out the binoculars and got to work.

Like most Americans, the night skies I usually see are spoiled by light and air pollution. A totally clear sky on a moonless night is a treat, especially when you’ve spent a lot of nights recently looking at the same patch of sky. The Summer Triangle was directly overhead, Cygnus and Aquila smack in the middle of the Milky Way, (though, somewhat ironically, just a titch harder to pick out because of the hundreds of now-visible other stars amongst and around them). The Great Rift was starkly clear, running down across the sky to the now-very-obvious teapot of Sagittarius.

One of the nice things about a clear night sky is the opportunity to see constellations you normally can’t see. A great example is Capricornus, just to the East of Sagittarius. It’s a beautiful, easy-to-make-out shape: an upside-down, slightly-bowed triangle, looking vaguely like an inverted Starfleet insignia. Its symmetry is visually appealing and in contrast to most other large constellations. But I’ve never seen it from Salt Lake Valley; its brightest stars are only 3rd magnitude, and in a city sky only the brightest/ Northernmost stars of the constellation, specifically the 4 that make up the 2 “up” vertices of the triangle, are visible. 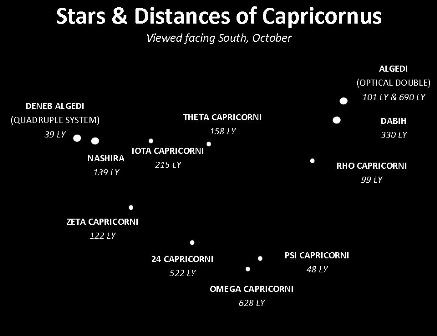 Extra Detail: The Eastern vertex/tip of the triangle is marked by the star Deneb Algedi, which is actually another quadruple system 39 light years away. The main star is orbited by its closest companion roughly once a day, eclipsing it and decreasing the apparent magnitude of the combined star by 0.2, which is just enough to be naked-eye detectable. I’ve been paying attention to this star of late because it is currently the brightest, closest skymark to the planet Neptune, which lies just to the East and a titch North (but is a bitch to pick out with binoculars.)

The opposite, Westernmost vertex BTW is marked by the star Algedi, which, like Mizar and Alcor, is another naked-eye double, but which unlike those Big Dipper favorites, are double optically only (more like Delta Lyrae, over by Vega); the 2 stars are actually almost 600 light years apart!* They just happen to be lined up relative to Earth.

*The East star is the closer one.

But Capricornus was easier for me to see not only because of the clear skies; it was easier to see because it was higher in the sky. Salt Lake City lies at latitude 40 degrees North.* The Grand Canyon is at 36 degrees North, meaning that the whole Southern sky is shifted “up” by 4 degrees. This may not sound like a lot, but as I’ve been recently spending a fair amount of time checking out low-lying Sagittarius after dusk, the shift was immediately apparent.

*Which is striking when you think about it. If you go the whole way from the equator up to Salt Lake, you’re not even ½ way to the North Pole.

Other Southern stars were similarly easier to pick out. Fomalhaut, the brightest star in Piscis Austrinis, the Southern Fish, is a star I can occasionally pick out from Little Mountain Pass; Wednesday night it shone brightly and clearly East of Capricorn. 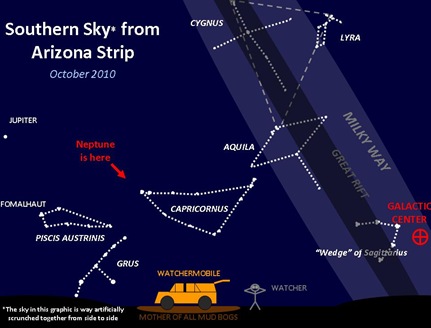 Extra Detail: Fomalhaut, 25 light years away, is the lowest, brightest star you’re likely to pick out from Salt Lake, the only 1st magnitude star in its constellation. You need an unobstructed Southern view to make it out. It’s part of the Castor Moving Group, the group of similar distance, age and composition stars moving in the same direction that includes Castor (in Gemini) and Vega (in Lyra). Fomalhaut has a planet BTW, a monster 3 times the size of Jupiter which orbits the star once every 875 Earth years, the longest “year” of any known planet. This planet was the first to be detected optically, in 2008 via Hubble.

But below Fomalhaut I could make out still more stars, stars I’d never seen from Salt Lake. Just under/South of the Southern Fish lay Grus, the Crane. Grus is one of the “modern” constellations, where “modern” essentially means “named by European astronomers after 1600 or thereabouts…”

In the late 1400s, as Portuguese mariners started sailing further and further South down the coast of Africa, they started spotting new stars, stars not visible at European latitudes. Since stars were an important navigational tool, navigators made note of them, and over the ensuing centuries, astronomers named several dozen new, or “modern”, constellations, including Grus. Grus was new to Europeans, but it was well-known to the ancient Babylonians, and later Arabs, who considered the stars to be part of the “tail” of the Southern Fish of Piscis Austrinis. 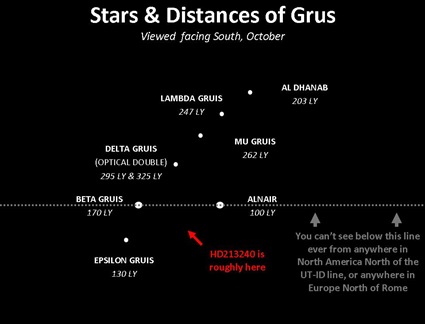 The brightest star in Grus is Alnair, which marks the Western “foot” of the crane. Though not on the scale of Deneb, Al Nair, 101 light years distant, is still an impressive star, shining nearly 400 times as brightly as our sun. It’s also a fast spinner, rotating roughly as rapidly as Vega or Altair*.

*And I imagine similarly distorted, though I was unable to confirm for this post.

I’ve never spotted Alnair from Salt Lake Valley, and in fact it’s completely and always invisible from anywhere North of latitude 42 degrees North, which coincidentally, is right at about the Utah-Idaho border. So you’ll never ever see this star from Idaho or much of the Northern US, or, for that matter, anywhere in Canada, the UK, or anyplace in Europe North of Rome.

Grus also contains an interesting planet, orbiting a very dim star that, while not quite naked-eye-visible, should be find-able with binoculars in clear skies. The star, HD 213240, 133 light years away lies just East and South of Alnair. It’s a yellow, main sequence star, considerably bigger than our sun, with a red dwarf companion. Its planet is another monster, with a mass some 4 ½ times that of Jupiter. But here’s the fascinating thing: Its orbit, although pretty eccentric, is almost entirely within the habitable zone for the star, meaning possibly the right temperature to support liquid water and water clouds. What would such a planet be like? Would it have a surface of any kind, or would it just be a Water-Jupiter of some sort, the cloudy, super-dense atmosphere eventually morphing into some kind of bottomless planet-wide sea as you descended through the atmosphere? And if life existed on such a world, what might it be like? 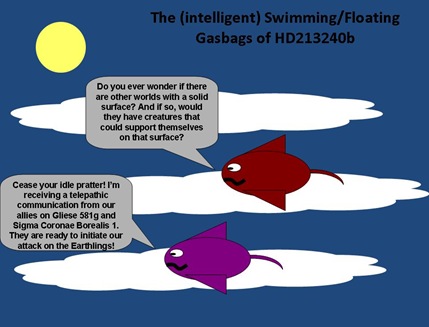 Stargazing took my mind off my predicament for a brief while. If I couldn’t locate the trailhead or Arizona Steve in the morning, what would I do? What would he do? Retreating to cell-coverage range would mean a 2 hour one-way drive back nearly to Fredonia, killing a full day of our planned trip. But there was nothing I could do now except worry. Sometimes the best short-term solution for a problem is just to go to sleep. I crawled into my sleeping back in the back of the Watchermobile, the stars wheeling slowly overhead as I drifted off.

Next Up: Getting found, and finding stuff.

Note About Sources: Jim Kaler’s STARS site is also my first stop when checking out stuff in the sky. I also used 3 new good sources for this post: the Astrojan Astronomical Picture Collection, the Stargazing Network site, and wingmakers.co.nz*

*Which is way New Age-Crunchy-Chakra-la-dee-da and distinctly un-WTWWU-ish, but has some good planetary and deep space object info.

Yeah, U R Nutz to try that with no communications.

You mean I have to worry about ANOTHER group of aliens attacking Earth?