Friday I rescued 3 bugs*. All were interesting, and I’m going to try to blog about all 3. The first one is easy, because I’ve blogged about it before. So I’ll just share a couple of quickie-pics, point you to the way cool details in the prior post(s), and then hopefully get a couple of real posts up on the other bugs later in the week.

*Actually, none of them was a true bug, which I explained in this post. Specifically, I rescued an arachnid, an odonate and an orthopteran.

Tangent: It occurs to me- as it probably has to you- that on the heels of a 5-part series covering the geology, flora, archeology, hydrology and (a bit of) fauna of- of all places- the Grand Canyon, posting about rescuing bugs may seem a bit tame, if not outright parochial, in comparison. To which I have a 2-part response:

First, as much as I’d like to spend every week hiking canyons, exploring cloud forests, biking deserts, searching for rare trees, running away from bears, making helmet-cam geology videos and camping with friends, I am, alas, unable to do so. So to watch the world wake up, I must do a fair amount of that watching a bit closer to home.

But second, many of the posts I’ve most enjoyed doing (and learned the most from) have been home-turf posts, blogging about everything from pigeons to magpies to houseflies to stargazing in the backyard to porcupines and dandelions. So get over it. I have- just while writing this tangent. Which BTW, is the real secret of the tangents in this project: they are wonderfully therapeutic. 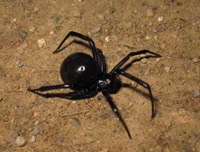 Friday morning I was riding the Shoreline trail before work right around dawn. I’d climbed Dry Creek in the semi-darkness, switched off my light at the first valley overlook, and was cruising along the next flat stretch, when I spotted a big, dark spider just sitting in the middle of the trail. I stopped to check it out, and it was pretty obviously a Black Widow, Latrodectus Hesperus. I flipped it over with a twig and confirmed the red hourglass on the underside. It was alive and moving, but very sluggish, presumably from the cold. It was probably a female- big, black and shiny, with a round abdomen. 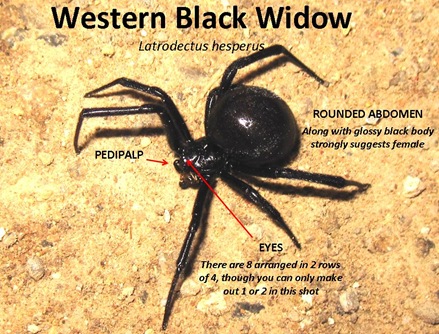 I posted about Black Widows 2 years ago when I found one hiding in a pile of bricks in my garage. In the first post, I highlighted their venom, which is about 15 times as potent as Rattlesnake venom, and, were it delivered in comparable quantity, would be routinely fatal to humans. The venom contains at least 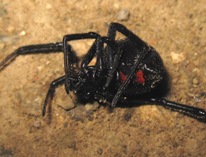 *Which posted a bit more about in this post, and then finally did justice to in this post.

What was she doing in the middle of the trail? Males do go wandering about in search of females, but adult females generally park it in a web and stay put unless disturbed or threatened. Sitting out in the middle of the trail like that, with the usual hordes of trail runners and mtn bikers only an hour or so behind, she didn’t stand a chance; she’d be smushed like a Darkling in no time. 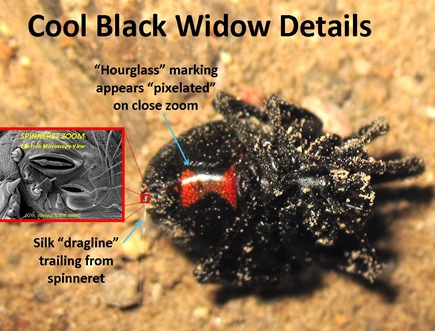 My second Black Widow post, which focused on lust, ended with the spider escaping in my garage and me worrying about how to root it out. About a week or so later I happened across her out in the open and promptly squashed her. I hadn’t seen a Black Widow since.

Tangent: As I hinted in the Darkling post, over the last year or so I’ve been going through sort a My-Name-Is-Earl thing with respect to bugs, and little critters in general*, trying to avoid squashing them and moving them out of harm’s way when possible.

Part of this is likely driven by just being a nature-freak-bleeding-heart-enviro-softie, and part of it is probably connected to my evolving worldview and perspective regarding the nature of self. But I suspect the lion’s share of it has been driven by the Gandhi-like example of Twin B, who never squashes a bug, and goes out of her way to help out little critters in trouble.

*Including a bird, a bat and a toad down in Florida 2 weeks ago.

Using 2 twigs I gently lifted the Black Widow up off the trail and deposited her in the brush a foot or so downhill. First bug rescued.

Note About Sources: As longtime readers know, I do not own an electron microscope. The spinneret inset is from the Smithsonian National Museum of Natural History website.

I was intrigued by the SEM image of the spinneret so I went looking for a larger version, thanks to your reference. (BTW, the text you added is small, but pretty sure it says "Umm, obviously not male".)

I found the image (and others) and a good article about spiders here - http://www.mnh.si.edu/highlight/sem/spiders.html

The whole article is good. As a mechanical engineer with an appreciation for materials, this caught my eye:

"Silk is a protein fiber produced in glands that terminate in spigots on the abdominal spinnerets. In the gland, silk is a water-soluble liquid protein soup. As the silk is spun, it passes through an acid bath. The acid hardens the silk by causing the molecules to reorient. Complimentary regions of the silk molecule align and bond together in multi-layered stacks, forming protein crystals. These crystals are interspersed in a matrix of loosely arranged amino acids. The protein crystals give the silk its strength while the loose matrix provides elasticity."

Way cool! I also learned that spiders will often eat their silk to recycle it.

I also took notice of the Theridiid spiders which comb the silk and some throw their web. Which led me to this video that first shows a Hyptiotes spider pulling a web and holding it tight, then at 2:00 shows the Gladiator spider making a springy net-like web that it holds and lunges onto prey to envelop them.

Spiders are fascinating. Moving with 8 legs, spinning silk, how they hunt, the eyes, the diversity of behavior - a lot going on with spiders.

KKris- caption reads, "...not mine". I guess I finally found the lower limit to how small I can make graphic footnotes...Thanks for the video link. Silk is indeed way cool (and totally post-worthy... oh man, something else for the list...)

Watcher, can you give me some of your save-the-bugs good karma to cancel out some of my kill-the-mouse bad karma?

KK, way awesome quote about the silk. I have always wondered what spider silk is made of and how it can be so elastic. Chemistry is cool, especially inside a spider's butt.

Today I accidentally ran over a tarantula on the shoreline trail. Saw it too late, couldn't change my line. Given that it's the first tarantula I've seen in the wild, I felt really bad. It was still twitching a bit and missing a leg when I stopped to see if I'd actually hit it. Mark N. finished it off. I think he could tell I didn't have the stomach to do it. I don't think I would have tried to avoid a black widow, but maybe your bleeding-f___ing-heartedness has worn off on me enough that I would.

I always feel bad for spiders...mainly because they deserve a shot at life just as much as anyone, yet most of us kill them anyway. It seems so terrible when a black widow bites a person (98% of them survive), but nobody ever thinks of the poor guys and girls we're squashin'. Oh well. Hopefully the world will wake up to the splendor of these self sufficient and beautiful creatures. There's more info on this at my blog: http://spiderrescuecenter.wordpress.com