Last Light Before the Night

Before I forget- don’t you forget to submit your plant post to the next edition of Berry-Go-Round, which I’ll be posting next week. So far submissions are scary-light. If things don’t pick I may have to fill it out with tangents and side notes about who knows what?

I was working on a meatier post this week, sort of a follow-on to the All About Heights post, about the evolution of ears and hearing, but it turned out to be more involved (and way, way cooler) than I anticipated, so it’ll have to wait till after the Thanksgiving holiday. So instead this week I’m going to sneak in one last quickie biking & shrubs post… 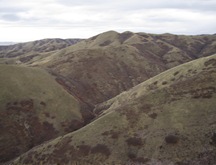 Winter showed up for real this week, with a series of storms that blanketed the foothills, backed up by a bitter cold arctic air mass that’ll keep most of the state below well below freezing through thanksgiving. Knowing it was coming, I biked in the foothills every day last week. It was gray, overcast and windy*, but the trails were clean, tacky and un-crowded.

*Seriously, what is with this multi-day pre-storm winds? I’m fine with big storms, but the drama of these run-on little cold-desert hurricanes gets tedious… I feel another email to Dan Pope coming on...

I kept an eye out for more hybrid oaks, and made hike-a-bike detours up gullies and ridges I hadn’t checked out in years, hoping for another lucky green sighting before the snow covered everything, but no such luck. Everywhere I looked was gray and brown, a melancholy landscape practically crying out for snow.

Up close alongside the trail, there were the usual splotches of (ever)green, low mats of Oregon Grape now and again. But in the hills North and West of City Creek, I noticed something else tucked away down low, under the oaks and maples in the more protected, damper gullies, another evergreen shrub, but with smaller, narrower, shinier leaves than the Oregon Grape. I recognized it from higher up, and remembered it because it has probably the best common name of any plant ever: Mountain Lover. 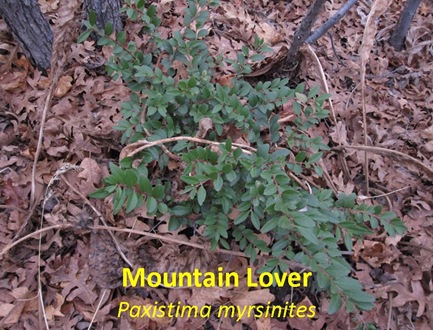 It actually has a whole bunch of common names, including Stafftree, Burning-Bush, Oregon Boxwood an Oregon Boxleaf, but I don’t know how you could ever come up with something better than Mountain Lover. It’s one of those little plants that’s real easy to overlook, and I only recognized it higher up earlier in the fall as I’d been paying close attention to shrubs this past year. But I’d never noticed it so low (~5,500 ft) before, and probably wouldn’t have, hadn’t everything else around been so brown. I haven’t seen it so low in the foothills anywhere South of City Creek, but maybe I just haven’t been paying attention.

Extra Detail: It’s common up above 7,000 feet, but it’s distribution in the Wasatch seems patchy. 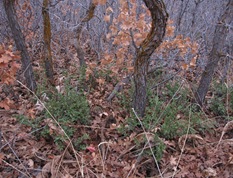 Some areas I see it all over, but in other similar-appearing areas it’s totally absent. It’s real common in the upper reaches of Mueller Park, alongside the trail to Rudy Flat. The foothills North and West of City Creek are really just the lower slopes of that same big hill, so I assume the plants in these photos are just low-lying outliers of that population, or maybe just remnants from when things were cooler and wetter and “mountain loving” shrubs ranged lower.

Once you recognize Mountain Lover, it’s easy to pick out. The leaf pairs alternate in direction along the stalks, the axis of each perpendicular to those above and below. In springtime it blooms teeny, easy-to-overlook reddish-brown 4-petaled flowers, whose cross-like appearance seems to mimic the alternating axes of the leaf pairs. 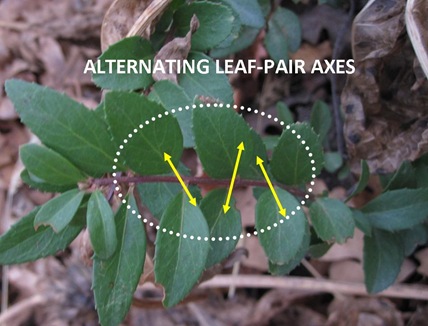 Mountain Lover, Paxistima* myrsinites, is interesting in that it isn’t closely-related to anything else around for hundreds of miles. At a real high level, it’s part of the same group of Eudicots to which oaks, peas and roses belong, but the only other member of the genus is a fairly rare, though similar-looking, species, P. canbyi, that occurs back in the Appalachians. Paxistima belongs to Celastraceae, the Bittersweet family, which we haven’t looked at previously as it’s overwhelmingly tropical, with only a few genera (mainly staff vines) represented in North America.

*Like the common name, there are several variants of he generic name, including Pachistima and Pachystima.

After poking around a bit, I finally found a close relative that I’ve come across previously- Crucifixion Thorn, Canotia holacantha, which I mentioned in passing last winter when we were checking out various spiky/thorny things down in the Sonoran Desert. That’s it- it’s only close relative is 600+ miles away.

I was glad to notice one more “new” shrub in my back yard before Winter shuts down my riding for (likely) a few months. All alone, unlike anything else around it, it brightened up the gray surroundings a bit, like a last light before the long night.

thx for your plant posts. i have fallen way behind on my endeavors to post more plant like postings(or tangents...lol)