In the transitional seasons- Spring and Fall- are staggered by about a month. In the Fall the Aspens, Maples and Oaks all turn and drop their leaves between about September 10 and October 20, but in the valley, the (planted) trees all change and drop between around October 15 and Thanksgiving. In the Spring, trees generally sprout leaves around the first 10 days of April, but in the foothills, the oaks and maples don’t usually sprout leaves till the first week of May. 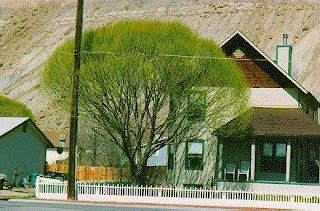 In the valley, the first trees to start showing green are always the globe willows. Before I moved to , I had a couple of “almost-moved-theres”. The last was in March 1995 when I flew out for a job interview. It was a dark, gray, rainy day, but as I drove back to the airport I kept seeing the bright, parachute-shaped masses of vivid lime green off to the side here and there from the freeway. When I finally did relocate out here, I learned what they were: Salix Matsudana ‘Navajo’, or Globe Willow, sometimes called parachute trees.

Every morning I drive by a string of globe willows by an apartment complex a couple blocks from my office. For the past 2 weeks, they’ve been showing hints of green, and I thought I should take a closer look. So yesterday at lunch I walked over to the apartment complex, camera-phone in hand (I have got to start taking my real camera with me everywhere if this blog thing is going to work), entered the parking lot through a hole in the fence, and checked out the willows.

Tangent: My father put my siblings and me through college largely by buying, fixing up and flipping slightly run-down apartments in various lower-middle class suburbs around . Part of the fix-up included painting apartment interiors, a task often (usually?) performed by (teenaged) me. I hated the work, the monotony, the shabby apartments, and the smell of paint. To this day, when strolling in or by slightly run-down apartment complexes I get a knot in my stomach, as though my Dad will pop out of a hedgerow and hand me a roller… 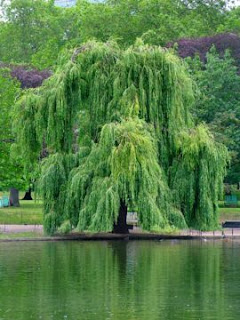 As a kid in , the only “willow” I was familiar with was a “weeping willow”, of which there was a great big one by our town library, drooping over a small pond. It turns out that weeping willow is not only non-native; it’s not even an actual willow species, but rather a hybrid of

There are somewhere between 350 and 400 species of willow in the world. Many look very similar and many hybridize freely, which means that a) nobody can agree on how many species there really are, and b) they’re tough to tell apart. has about a dozen native species of willow, usually found on or near watercourses. The globe willow is not one of them. It’s an import from (which is home to the greatest number of willow species) that was apparently bred into its present variety in the American Southwest (?) 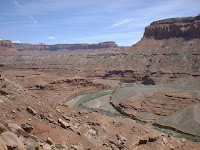 Most willows I’ve been familiar with as an adult have been the brushy kind that grow in canyon bottoms and whack you in the face as you’re trying to bushwhack- one nearly put my right eye out in a side canyon of the Dirty Devil River (pictured) in 2001.

There’s a stand of willow- maybe Coyote Willow (Salix Exigua)- along my usual morning mtn bike route, at the mouth of Dry Creek, which is still completely brown. (Photographed this morning… photo not saved on hated camera-phone…)

But down in the valley, the Globe Willows are coming to life. Globe Willows seems to show green so early, because the very twigs turn green even before the buds start to bloom. In this shot here you can see the strong green tint if the twig bark, as well as the now active (green) leaf buds bursting from the older (brown) bud sheaths which covered the juvenile, then-dormant buds over the winter. 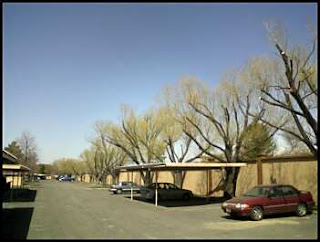 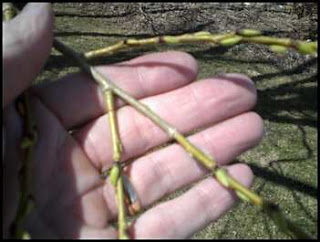 I haven’t been able to find out about the green bark, but I wonder

if this is an adaptive advantage of photosynthesizing via chlorophyll directly in the bark, getting a pre-bloom jump on growth, through a mechanism similar to Palo Verde, for example.

So other than there being lots of them and some turning green early, what’s so great about willows? Here’s what: Pollination.

Willows, like all flowering plants, are angiosperms. It’s thought that all angiosperms descended from a common ancestor. There’s a lot of background behind this consensus, but the Reader’s Digest version (I haven’t seen a “Reader’s Digest” since about 4th grade- do they still exist?) is that the way in which angiosperms reproduce is so phenomenally complicated and bizarre (and I’ll cover it in a future post) that it seems terribly unlikely to have evolved more than once.

Willows are dioecious, meaning that a given plant will have either all male or all female flowers, but not both. But male or female, their flowers are pretty lame (see diagram.) 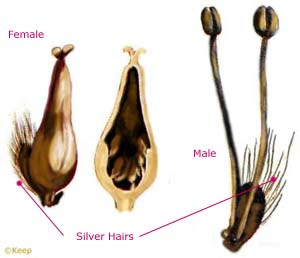 And because they’re so lame, it was assumed for a long time that willows were wind-pollinated. But it turns out that they’re in fact insect-pollinated, and that apparently, they went through an evolutionary-pollination-strategy-story (EPSS?) that went something like this:

Which means that willows have switched between wind and insect pollination at least 3 times. This is what’s so cool about plants; every plant tells a story, and the more you know about plants, and better understand their stories, the better you can see the Beauty of the World.

I understand that willows are pollinated by ants, so, willows being dioecious, does that mean that an individual ant must climb (it's more of a walk, isn't it?) up a staminate tree, collect pollen, then return to the ground and travel to another willow, this time a pistillate one, walk up the tree again to pollinate a stigma?

Seems like an awful lot of work for ants!

Aristata- I hadn't read of ants being a common pollinator of Willows; I'm more familiar with them as pollinators of lower-lying ground-level flowers. So while I don't have a great answer for you, keep in mind that plenty of willows are low and brushy (Coyote Willow for example.) So it may be that ants are more effective as pollinators for lower, brushy willows, but not so much for taller willow "trees." You can find a bit more info on the effectiveness of ants as pollinators here: http://pollinators.nbii.gov/portal/community/Communities/Ecological_Topics/Pollinators/Pollinator_Species/Invertebrates/Ants/

I'd never read this-- thanks for linking to it! And I love Navajo willows (even tho...). Photo #1 looks great, but willow photo #3 seems to imply these are victims of that butchery form of pruning. What's the scoop? Is "parachute" a normal growth form?

I see your in-depth research style for WTWWU was set early on.

Sally- the apartment complex willows (which I still pass by daily) are regularly pruned, but the parachute form is the "natural" form of the cultivar. Driving around Salt Lake Valley in March you see these bright lime-green parachutes everywhere. (Weird but pretty!)I don't remember seeing them around Denver.

Willows are great because they are fast growing trees that can be used for a lot of things, also Bigfoot hybrid willow grows faster than all of the willow species because of its hybrid vigor, so is used for windbreaks and screens.

That was a good read. Have always loved the Globe Willow. PS you took that photo in Palisade, correct? 🙂