Last Saturday I did a 97-mile bike ride that took me out into the . This wasn’t as big an undertaking as it sounds; I rode with 4 other guys in a rotating pace line, and our average speed was about 22 mph. 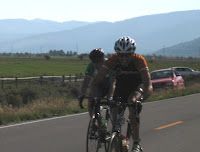 Tangent: I’m an amateur bike racer (Road, Cat 5). I only got into it over the last year or so, when I discovered- in my forties- that I actually have one (and only one) decent athletic skill: I can ride a bicycle at a decent rate of speed for a long time. That’s it. I can’t throw, play tennis, run fast, swim gracefully or even open pickle jars reliably, but I can ride a bike like a bat out of hell. This year I joined a team, which sounds impressive, but really means that you pay a few hundred bucks to buy jerseys and shirts that are plastered with logos, and get a nice discount on parts at the local bike shop. The main two benefits for me are that I’ve met some equally fast guys to ride with, and the bike shop discount extends to mountain bike parts, which I am constantly breaking or wearing out. 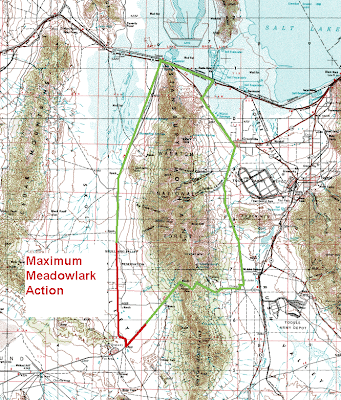 Our route was a counter-clockwise loop around the Stansbury mountains, which are the 2nd range heading West from . sits at the foot of the Wasatch mountains, which are really the last range of the as one heads West. Although is part of the Great Basin, it’s really at the very edge of the basin; if the Great Basin were an inland sea, would be on the shoreline. When you travel a short distance West, the landscape, plants and wildlife change noticeably and quickly. The landscape turns into Basin and Range country, with isolated range after isolated range, with dry, empty scrub and sage-filled valleys in between. The first “island” range heading West is the Oquirrhs, the second is the Stansburys, the third is the (much lower) Cedar Mountains, after which come the salt flats, followed in turn by Toano and Pequop ranges, etc., etc., clear to the Sierras.

Our route started and ended in Grantsville, in the Northern end of , followed I-80 for several miles to get around the Stansbury range, and then headed due South for 40 or so miles down , the almost empty basin between the Stansbury and Cedar ranges. We rode through between about 9 – 11AM. The morning was cool and sunny, and repeatedly, for better than an hour, I heard my favorite birdcall ever: the song of the Western Meadowlark. 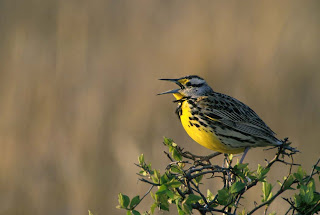 I mentioned in the last post that the birds having been starting to be heard in the mornings. Around my house, the usual singers are birds like robins and goldfinches, as well as the occasional mourning dove. On my morning rides in the foothills, these are augmented or replaced mainly by magpies, scrub jays and sometimes Steller’s jays.

But the Western Meadowlark generally seems to stick to the proper. My first exposure to it was a road trip several years ago to the with my wife and young son. We overnighted in , and the following morning, as is often my habit on family road trips, I tiptoed out of the motel room shortly before dawn to sneak in a pre-breakfast mtn bike ride. My ride took me through the sage-covered hills South of town, and I was treated throughout to the Meadowlark’s song, which I’d never before heard.

The Western Meadowlark is a “short-distance migrator” (range map on right), basically means that while it migrates, it doesn’t do so on the scale/range of many other birds. The desert due West of Salt Lake just a titch North of its year-round and into its Summer range. It sticks primarily to open grasslands. Males typically arrive in the breeding area couple of weeks before the females, and stake out a perch, which is often a fencepost, phone pole or branch, and sing their song to attract the ladies. Western Meadowlark males usually have 2 mates at the same time (which is somewhat cornily appropriate for I guess), and the females do all of the incubation and chick-rearing. 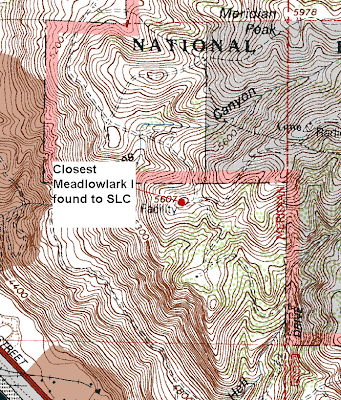 With one exception, I’ve only heard the Western Meadowlark at least 20 miles West of Salt Lake. 2 years ago there was a male perched on a phone pole in April at the 2nd radio tower going up Ensign Peak, just North of downtown Salt Lake. I stumbled upon it one morning and returned 2 days later to hear and see him again in the same spot. 2 days after that he’d moved on, either having found a mate or having figured out that all the females were a couple valleys to the West…

In the Great Basin, where so many bird-“songs” are basically glorified squawks, the Western Meadlowlark’s song is a bit of pure musical happiness.

Tangent: My least favorite Western birdcall/song is probably the magpie, which I always find reminiscent of the cry of a late middle-aged woman who’s smoked 2 packs a day for the past 30 years, when she’s angry about something or other,,,

There are several variants of the song, and I found a few clips on YouTube, but none captured the song quite as a I heard it last Saturday morning. I came back with the song in my head and fiddled around on the piano till I could reproduce it. Now I couldn’t figure out how to write musical score online, so I’ll use a simpler notation here: I’ll use write the musical note (A, C, etc.), and then as I write the notes in sequence, if the next note is above the previous note, I’ll write it as an uppercase letter, and if it’s below the previous note, I’ll write it in lower-case. Then when a note is stressed or held just a bit longer, I’ll bold/underline it. Make sense? At any rate, here it is:

Try it on a piano/keyboard/recorder/whatever, play it again and again till it’s stuck in your head, then go take a drive into the West Desert on a sunny morning and listen for it.