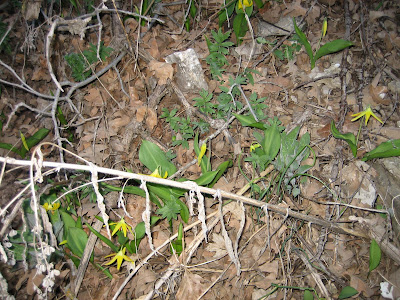 Saturday morning I took my usual morning mtn bike ride on the Shoreline trail. Just starting up Dry Creek, just past the willows (Coyote Willow?) by the mouth of the gulch, there were several wildflowers. Not the diminutive, semi-microscopic phlox-like things I’ve been seeing for the past 2 weeks, but actual, real, honest-to-god flowers off the side of the trail on the South side. The flowers were Glacier Lilies, Erythronium grandiflorum, which is traditionally one of the first wildflowers to pop up after the snow recedes.

Glacier Lilies are beautiful, drooping little flowers, almost columbine-like in their elegance. In they’re most typically found between 5,000 and 9,000 ft, in areas dominated by Gambel Oak and Big Tooth Maple, which is exactly where these are. Further North in and , the underground bulbs, or “corms” of glacier lilies are a favorite food of grizzly bears, who will apparently go well out of their way to snack on them. Around here, their main consumer these days is probably mule deer. I’ve also read that Native Americans also used to eat the corms, either boiled or dried, and so I got it into my head that I’d return, dig up a couple and try them. (Yes, I know picking wildflowers is bad form and all, but this would be “for science”, or I guess in my amateurish case- wannabe science.) 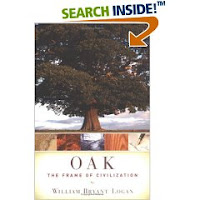 Tangent: Last Fall I tried boiling and then roasting a couple of acorns. (I had recently read Oak- The Frame of Civilization, by William Bryant Logan, and in it the author describes eating acorn jelly and makes it sound like a metaphysical experience.) It was a disaster. Acorns are filled with tannins, that a) taste awful, and b) can cause liver damage in significant quantities. So Native Americans (can I just say “Indians”?) ok, Indians would submerge them in running water for a few days to leach out the tannins. I read online that the same leaching can be effected via cyclic stove-top boiling; when the boiled acorns stop turning the water brown, the tannins had presumably been leached out.

So I boiled, dumped the brown water, then boiled again, over and over like 6 or 8 times. Finally, the water wasn't getting any clearer, but I was getting bored and had already spent like 8 million BTUs boiling 2 acorns so I took them out, stuck them on a cookie sheet and roasted them in the oven for a little while (30 minutes? I have this thing against precise measurements of volume or time when cooking- it’s like my little rebellion against the tyranny of recipes or something…) Anyway, I took them out, let them cool for 5 minutes, tried one, and it tasted like a piece of charcoal.

Anywho… my Euell Gibbons-like plan was thwarted by the Spring snowstorm of the last 2 days, which has laid down 6 inches or so of snow on the foothills. But I’m optimistic that I’ll get my chance later in the week and hope to head up Dry Creek one morning soon with a trowel in my camelbak.

Since Glacier Lilies are perfect, beautiful, and early-to-bloom, this is probably a good place to talk about the structure of flowers. 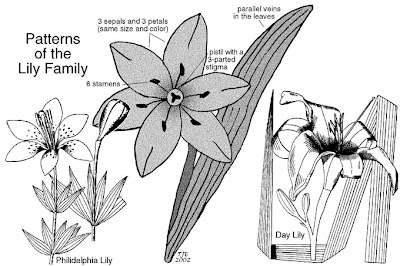 A perfect flower has stamens and a pistil. A stamen is the pollen-producing organ (the male part). It’s a long stalk, capped by a pod called an anther. The anther is full of pollen, and when the anther breaks open, the pollen will get smeared all over anything- like a bug- that goes in or out of the flower. The female organ, in the center of the flower, is the pistil, which is comprised of another long stalk- the style- that leads down to the ovule. The style is capped by one or more sticky landing pads called stigma, which do a good job of holding onto any pollen grains that come in contact with it. 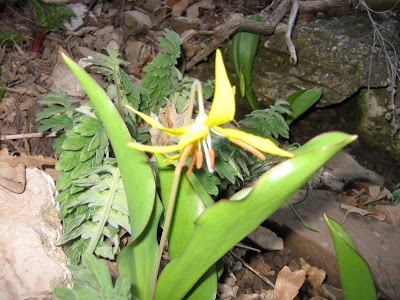 A Glacier Lilly, like all lilies, has 6 stamens and 3 stigmas, (atop the single pistil). Lilies always have 6 petals, only that just 3 are actual petals, and 3 are really “sepals”. Sepals are the leaves that emerge from the stalk just below the flower petals, and comprise the calyx of the flower. Sometimes sepals look like leaves; sometimes- like in lilies- they look just like petals. 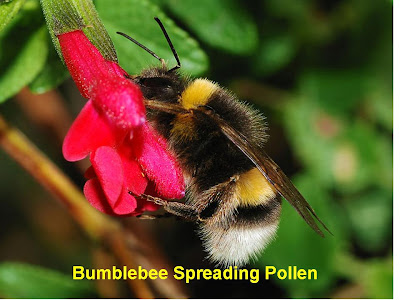 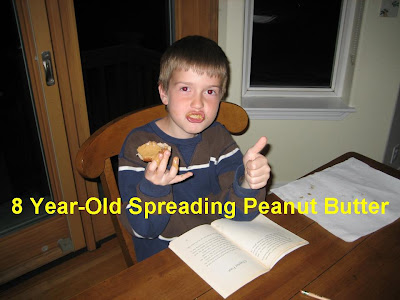 The most common pollinator of a Glacier Lilly is a bumblebee. Big and hairy, there’s no way a bumblebee can get in or out of a Glacier Lilly without getting its legs and abdomen covered with pollen or without bumping into a stamen or two. My favorite analogy is my 8 year old son. When he comes into the kitchen to make a peanut butter sandwich, there’s almost no way he can get out of the kitchen again without leaving peanut butter smeared over the countertop and table. Similarly, the bumblebee’s sloppiness makes her an excellent pollinator.

What happens after the right grain of pollen gets on the right stigma I’ll cover in another post, but suffice it to say that it’s an amazingly elegant and complex if thoroughly bizarre bit of engineering that goes on in the fertilization of every angiosperm in the world.

What always amazes me about pollination is that the right pollen winds up on the right stigma; bees visit lots of flowers, but somehow things work out such that a pollen grain from the same species winds up on the right stigma, and that all the other wrong pollen grains that must land on the same stigma don’t somehow mess things up. When you think about wind-based pollination, the scale is even way more incredible and daunting; you throw millions of pollen grains into the air, and just hope that somehow, one of the grains you throw randomly into the wind is actually going to wind up on the stamen of the flower of the same species as you. It sounds utterly and completely impossible. And yet it works, it happens millions of times every year. Every flower, every acorn, every floating cottonwood seed is just this amazing miracle against probability, and it happens over and over again.

Acorn jelly, or dotorimuk is a very common food in Korea -- you have like a 25% chance of getting it in any good Korean restaurant. I can't imagine anyone describing it as a transcendent experience!

Troutgirl- you're so right! Check out this follow-up post (and culinary action video) I did with the Bird Whisperer...