Spring Forward and the Bush That Saved My Life 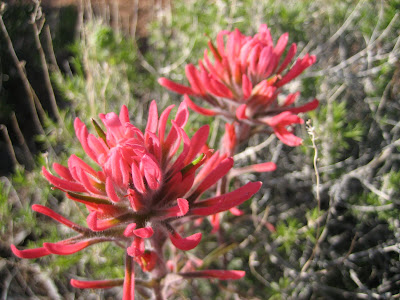 My weekend down South was wonderful. Much of that was the same wonderfulness of pretty much every Southwest Utah mtn biking weekend with friends- tons of great, technical riding, amazing views, camping with good friends, and stumbling into work Monday morning sunburned, wind-burned, sore and exhausted. 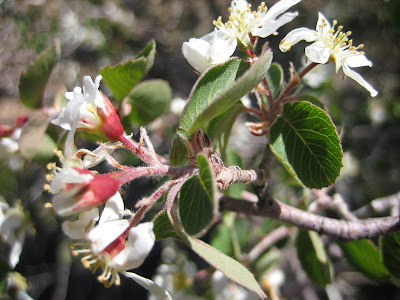 But the other part of the wonderfulness was the catapult into Spring. The area we visited, the upland benches and mesa East of Hurricane , lie nearly 300 miles South of Salt lake, and as a result, by the 3rd weekend in April, Spring is in full blast. Even driving through Toquerville and Hurricane Friday evening it was light enough to see that the Cottonwoods were fully leafed out. 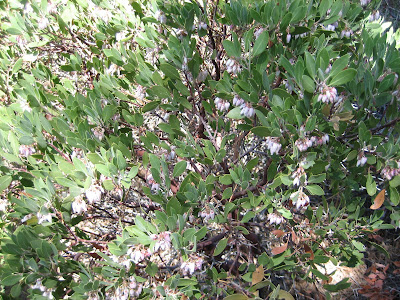 Up on the mesas (5,200 – 5,800 ft) I don’t think I’ve ever seen it so green; the Sagebrush was almost lush with new growth, and so many things were blooming: Serviceberry, Manzanita, Claret Cup (Hedgehog) Cactus, Prickly Pear, Indian Paintbrush, Yucca, Tree Cholla. Even the shrub live oak, Quercus turbinella, was covered with soft, delicate new leaves and pollen-spreading catkins (male flowers) visible in the close-up photo. 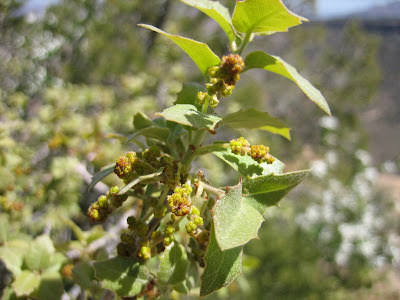 This area- the is one of my- if not the- favorite areas anywhere. Broad, widely spaced mesas capped with Pinon-Juniper woodlands are separated by rolling benchlands covered with Sage, Blackbrush and Rabbitbrush. At the lower end of the benchlands stands of Creosote start to appear, as the desert flora transitions from to Mojave. If I could live out of my truck and just bike and hike and explore all day and sit in a lawn chair and watch the stars come out every night to the howls of coyotes, I’d probably do it somewhere around here.

In fact I could do a whole blog about this amazing area, but that would take me away from the task at hand, so I’ll highlight just a couple of favorite things down there. Today I’ll revisit two of our old friends, Blackbrush and Bitterbrush, and tomorrow I’ll talk about the Big Pines. 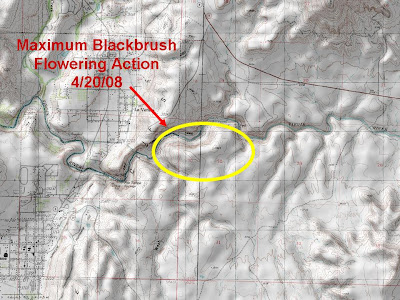 I’ve already talked about the amazing range of Blackbrush, but it’s worth mentioning again because down outside Hurricane it’s in full bloom. For a wind-pollinated flower, it’s a wonderful exception to the “lame-O” rule; the deep green, fresh leaves are complimented by dozens and dozens of little yellow butter-cup-like flowers. The flowers have many stamens, arrayed around a single pistil which is sheathed in a unique structure called a torus. The stamens are well elevated, exposed to the air beyond the “cup” of the flower, as makes sense for a wind-pollinated flower. The stamens and pistil are surrounded by 4 small yellow petals. Only they’re not petals- they’re sepals (which we discussed back when we talked about the structure of the standard blossom.) Blackbrush flowers are technically petal-less. 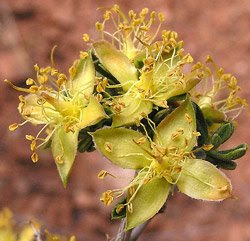 Semi-Tangential-Huge-Boner–Mea-Culpa: I rode through hillsides carpeted with flowering Blackbrush on Sunday afternoon, on our last rid of the trip (Hurricane Rim.) It was meant to be a quickie “bonus” ride, and I didn’t expect to see anything great, so I left the camera behind. Huge mistake (when will I learn??) The ride was carpeted with wonderful flowers, and the leaves of many shrubs- most notably the creosote- were the freshest and greenest I’ve ever seen. So these Blackbrush-flower photos are, sadly, not mine, but photos I picked up off the web. (I will try to amend this error, if possible, with a return trip inside 8 days- stay tuned.) 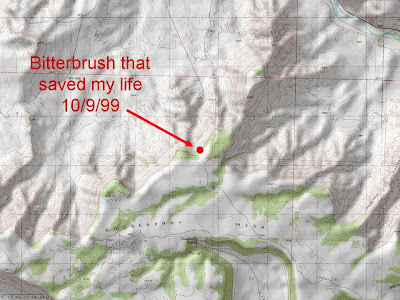 Tangent- The Amazing- Bitterbrush- That- Saved- My- Life-Story: On October 9, 1999, some friends (including 2 of the same as this past weekend) and I were riding the “Windmill” trail on Gooseberry Mesa. The trail is a side trail used to access the main trail network, is a combination of slickrock and singletrack and includes significant exposure in many places. I was in the lead, in full view of my friends, when my front wheel hit a sand trap about 2 feet from the rim, and a sheer drop of ~40 feet. The sand trap caught my wheel and twisted it away to the left, pushing me and my bike off to the right. My bike landed on its side , but I, being higher, fell further right, on an arc to clear the rim.

On the very edge of the rim grows a 4 foot high Bitterbrush, with which I collided. The shrub’s branches bent under my weight, and in less than a second I was entirely suspended over the 40-foot drop. The branches stopped bending and I waited a split-second for the inevitable crack of wood, looking down, trying to determine my likely point of impact. Only there never was a crack, and slowly, impossibly, unbelievably, the branches rebounded back as if in slow motion, and as if it were the soft loving hand of God, the Bitterbrush of Continued Life laid me gently back in the sand trap.

NOTE 6/16/11: This post, written when I was still a total plant-rookie, was mistaken. The bush that saved me was a Cliffrose, not a Bitterbrush. I acknowledged/corrected the error in this post, later that same year. Two years following this post, I filmed a great stretch of blooming cliffrose in the last few seconds of this video. 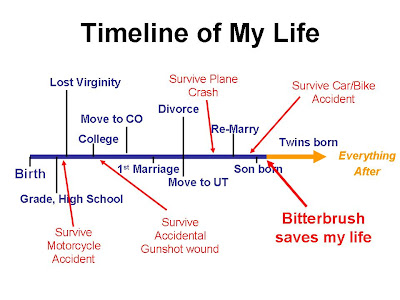 My friends behind saw the whole thing happen and talk about to this day. The trail has since been re-routed several feet away from the rim, but I never ride past without stopping to water and thank my favorite shrub. A lot of people don’t think much of desert shrubs. Everything in my life since October 9, 1999- including my twin daughter and son- I owe to that Bitterbrush.

Tangent-to-Amazing-Bitterbrush-yadayada-Tangent: On October 8, 1998, a year and a day before my Bitterbrush Incident, I was hit by a car on my bike. I survived fine, but endured a 6-week rehabilitation (torn rotator cuff.) On October 10, 2000 I again went for a bike ride (Mormon Trail, ) and I was extremely careful…

Next Up: Big Trees in Cracks
Posted by Watcher at 12:05 PM

Hey, he lives. I just noticed the 6/16/11 update to this post. Hope things are well with you. Baby Alex here is a year old and walking (well, toddling if that's a word). We're moved into the house we built in Lake Point and slowly, carefully selecting trees and plants for landscaping.

See what happens when you stop blogging for a while? I finally went back and read the dandelion stuff.

El Guapo- Yes, I live! (Maybe sometime I'll even get around to starting Part 2, but have been having a great year in the meantime.)

Glad to hear Baby Alex is doing well. (If he's walking a year, he's way ahead of his namesake- I didn't walk till 18 months) BTW, I always felt the 1 year mark was the absolute best time to hike/walk with kids in the backpack-style kid-carrier; they're old enough to deal well with the adventure, but still light enough as to not destroy your knees/back. Enjoy this time- I miss it!

This is a fun age for sure. I took Alex up Bates Canyon behind our house last Sunday in the kid-carrier. We were experimenting with transplanting some gambel oak starts from the canyon into our yard.

(Legal, as best I could tell from the BLM's website, as long as it's for personal use and a "reasonable amount." But tell me if you know otherwise! The info I found was about gemstones, trilobite fossils, firewood.)

Anyway, one of my eight little oak saplings survived the week. There's not much of a root system left when you cut through the one attaching it to the mother tree.