Dandelions are Way Cool Part 3 - Where are the Natives?

So now that we’ve covered the cool structure and amazing genetics of dandelions, what are we seeing on our neighbors’ lawns? We’re seeing asexual triploid Taraxacum officianale, which has been introduced (always accidentally I assume) from Europe to multiple, multiple times since the mid-1600’s, so far as we can tell. We know there have been multiple introductions because there are a many, many distinct triploid lines of dandelions around . What’s interesting is that some of these lines are extremely localized, while a few are very widespread. If you’re interested, here’s a link to a PowerPoint that reviews T. officianale genetic variation across several locations in the (Thank you Jing Luo!)

But before the arrival of Europeans, there were already dandelions in , and the good news- for us plant freaks anyway- is that they’re still here. It’s thought that Taraxacum originally evolved in Asia, possibly near the . In there are dandelion fossils over 100,000 years old, so we know they made it across either Beringia or the at least that long ago. Today there at least 3 native dandelion species that I know of in , all of which appear to reproduce sexually. I’ll describe them in this order: The Most Distant, the Rarest/Weirdest, and the Closest to Home 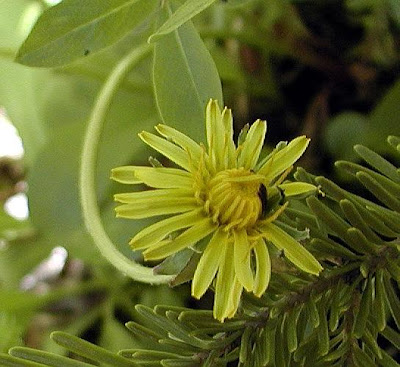 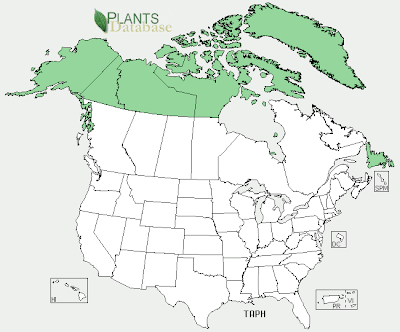 In the far North, spanning the Canadian Arctic and , is the Northern Dandelion, Taraxacum Pumilum (pictured left). I’ve included the range map (pictured right). I don’t think I’ve ever been within 500 miles of this guy, so probably not likely to see it anytime soon. 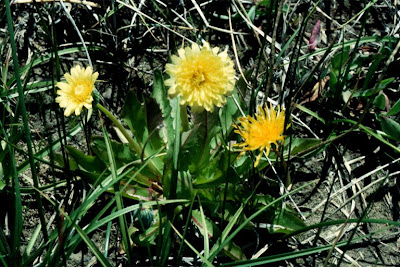 The Rarest/Weirdest dandelion is the California Dandelion, Taraxacum Californicum (pictured right). Rare, because it exists only in the San Bernardino Mountains of (which as it turns out is a way cool area botanically and one I need to engineer a trip to sometime.) Weird, because its chromosome number is 31. That’s right, it’s aneuploid, which means it has a chromosome number that is not a multiple of the haploid number for the species. Remember, the diploid number for a dandelion is 16, and the haploid number is half of that, or 8. And 31 is not a multiple of 8, which makes it aneuploid. Despite this, the California Dandelion apparently reproduces sexually, though how meiosis works with an odd chromosome number is beyond the scope of this blog. (Translation: even I have a dandelion-genetics information saturation point, and it’s right about here…) 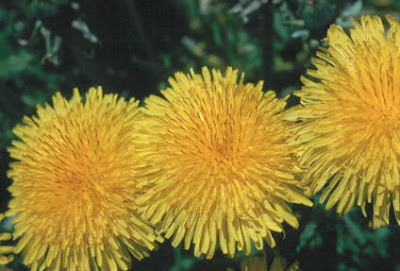 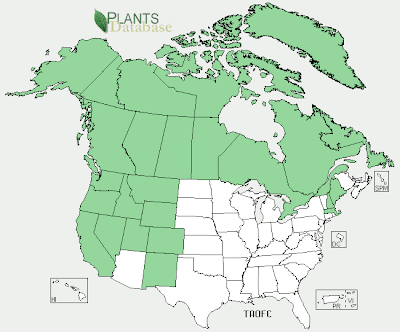 And lastly, the Closest to Home. The Horned Dandelion, Taraxacum Ceratophorum (pictured left) occurs widely across , but it’s distribution within that overall wide range is very spotty. Its overall range is pictured here (right)- it’s in New England but then absent clear across the Mid-west, Plains states and Southeast (though it’s found clear across ) and then it pops up again in the . Some of the most detailed research around Horned Dandelions has taken place in , and apparently (only about an hour from where I used to live) is a great place to see them in summertime.

But T. Ceratophorum occurs here in as well. And pictured here, courtesy of the Utah State Digital Atlas of the Vascular Plants of Utah (it’s really almost unbelievable what you can find on the web these days…) is a map indicated where it’s been found in . Two of these locations- the La Sal Mountains near Moab, and the Southern end of the Deep Creeks in the West Desert- I’ve visited in summertime within the last 4 years, and may well have walked by them without knowing what to look for. Ah well, both are wonderful places to have reason to visit again, and with the Newfoundland Mountains finally crossed off, I have room for something else on my need-to-see list.

Side note: This has been a monster deep-end on dandelions. Kind of like what my 8-year old does when he gets into dinosaurs, or prehistoric mammals, or Yu-Gi-Oh! But when I get into and really understand a given plant or aspect of the natural world like that, it’s almost as if a part of my own awareness wakes up, like something was always there that I missed, and now my eyes have opened up in a way they never quite have before. I have a name for this sense of “waking up”. I call it the Beauty of the World, as in, if you go and look at a pretty plant or insect or mountain range or fish or whatever, you see that it’s beautiful and you enjoy it and that’s it. But when you see that same plant or insect or mountain range or fish and you understand what it is and where it’s from and how it works or was created or reproduces and how it connects to and interacts with the world around it, then you don’t just see the beauty of the thing, you see a little bit of the Beauty of the World.

Another side note: The trip to Gooseberry Mesa is pulling together. After some flaking/attrition, the core group is rallying. It should be a fine trip with fine friends. And a great change of scenery, with a completely different and very interesting flora as we spend the weekend biking and camping around the transition zone of the and Mojave deserts. Tonight will be a busy evening of packing and helping friends with gear- one who needs to borrow a rear shock, one who needs to borrow a light. (We always work in a night ride on these trips... which while being almost totally tangential to the point of this blog is just so amazingly cool I will have to figure out a way to work it in sometime…)