I am so not Euell Gibbons

The weekend was warm, clear and wonderful. I haven’t seen a cloud in over 72 hours. My sister was visiting from out of state, so I stayed close to home. My sister’s a late sleeper, so both mornings I headed out early into the foothills on my mountain bike. The days are noticeably longer now. I no longer need a light when I head out in the morning. 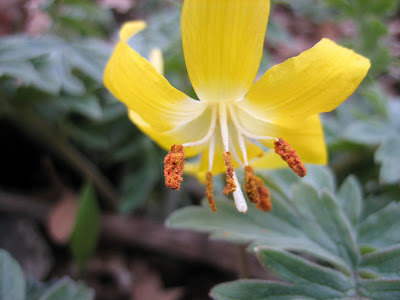 Saturday I was at last able to return to the site of the Glacier Lilies of 2 weeks ago. And there are more than ever. I got this great close-up shot, which very clearly shows the pollen-filled anthers atop the stamens. I brought a flower home and playing with a needle and magnifying glass, picked open an anther, revealing the yellow pollen inside. 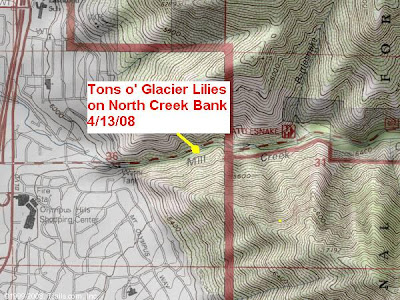 But my attempts (all 3 of them) to unearth a corm were dismal failures. In 2 of my excavation attempts the underground stem broke off in the rocky soil and I was unable to relocate the lower end. In the third attempt I think I reached the corm but shattered and scattered it in the soil as I dug. I hope to make another attempt, but ran out of patience and became chagrined at the holes I was leaving in the hillside. Talk about inept; bears dig them up all the time, Indians made them a regular seasonal component of their cuisine, and I, with a modern trowel and knowledge, can’t manage to dig up even one in coherent form.

Sunday afternoon I went up on my road bike and saw tons more Glacier Lilies below the road on the (South-facing) North bank of the creek. 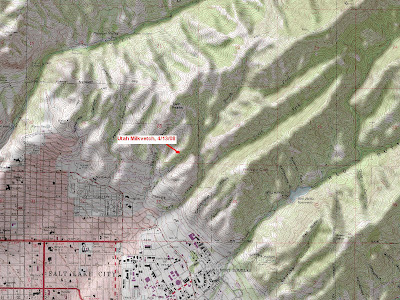 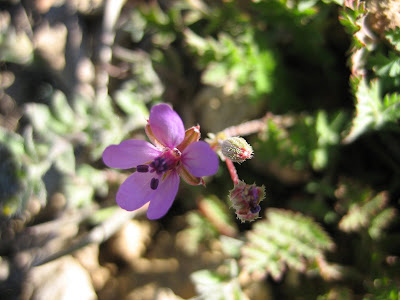 Sunday morning I found 2 new flowers along Shoreline trail: Utah Milkvetch, which I found and identified last week on , and a mystery, tiny phlox-like thing I haven’t yet been able to identify. (I checked two guidebooks and a pretty comprehensive wildflower site.) But I got this great close-up photo. It’s obviously perfect, with clear pistil and stamens. But it sometimes has 5 and sometimes 6 petals. (They’re true petals- you can see the brownish sepals forming the calyx underneath.) 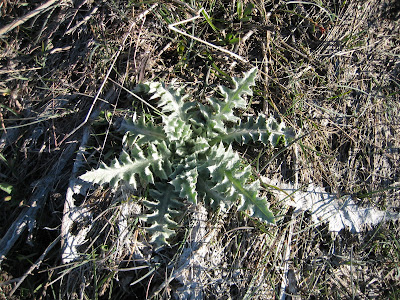 I also found something far more sinister (pictured left) which is already visible in abundance. I’ll come back to this evil character in a future post.

At about 5PM my wife headed out to a yoga class, and, too lazy to cook, I took the kids to the Blue Plate Diner for dinner. We sat outside in the sun, enjoying the novelty of shirtsleeve weather after so long a winter. 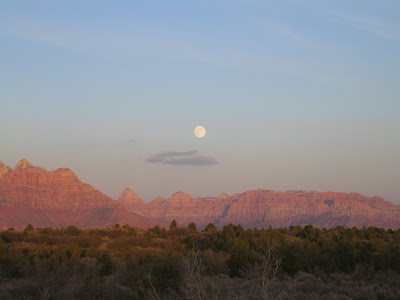 Tangent: This coming weekend I plan to head down South with my buddies to Gooseberry Mesa in . We do a couple of mountain-biking weekends there a year. It’s an amazing place, with some really interesting stuff going on botanically as well. We’ve been doing these trips for ~a dozen years. But every year it seems to get tougher to get the gang down there. One friend is talking about bringing the wife; another called me up this morning to flake out- too much stress, work, somesuch. We pick these dates months in advance, but in the last week it always seems like 1/3 or so of the gang flakes. I guess that’s why I end up doing more and more solo trips over the years. As you get older it seems that your circle of friends you can count on to join in adventures gets smaller and smaller.