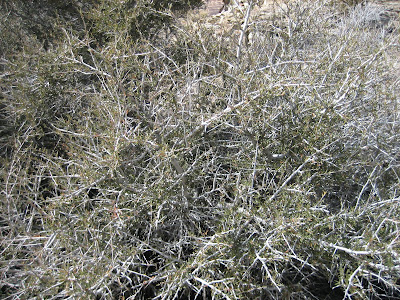 The second common shrub in the is Blackbrush, Coleogyne Ramosissima. Blackbrush occurs over a huge range in the intermountain West. Here it’s found with Sagebrush, down in the Mojave it frequently grows alongside creosote, and it also occurs in pure or nearly pure stands (sometimes called Blackbrush steppe by botanists.) Like Sagebrush, it’s a tough, durable, wind-pollinated shrub that thrives in a wide range of temperature and drought conditions, but it differs from Sagebrush in two real interesting ways. 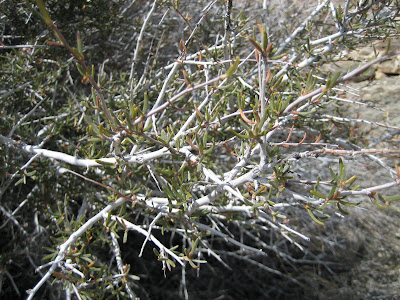 First is its leafing architecture and strategy. I mentioned in the last post how Sagebrush leaves are partially protected by the elements by their coat of fine hairs. The other way to protect a leaf in the desert is to coat it with a tough waxy cuticle, as does creosote or Curl-leaf Mountain Mahogany, and it’s this structure evolution has implemented in Blackbrush. Up close, Blackbrush leaves look like teensy-weensy Mountain Mahogany leaves, dark green, stiff and shiny. I mentioned Blackbrush earlier as an “evergreen shrub”, but technically that’s not quite true; Blackbrush is more accurately “partially deciduous” or “drought deciduous, reacting to periods of water stress by shedding older leaves (as can be seen in the close-up photo to the right.)

The second difference is even more interesting: Blackbrush is monotypic, which means that Coleogyne Ramosissima is in fact the only species in the entire genus Coleogyne. No other species, subspecies, races, nothing. Compare this with Sagebrush, and its 500+ species worldwide and countless subspecies and hybrids. Both Sagebrush and Blackbrush are tremendously successful across huge expanses of the . But while Sagebrush does so by being infinitely adaptable and genetically variable, Blackbrush does so by having a single, well-tested design and sticking with it.

Tangent: I keep feeling that there’s some weird life analogy in the contrast between Sagebrush and Blackbrush. Is it better to work one’s way through life by changing and adapting, or by sticking to a determined path?

Blackbrush seeds, unlike Sagebrush seeds, are too heavy to be carried by the wind, and are usually dispersed by rodents, who cache great numbers of them, but inevitably fail to eat all that they cache. I returned the way I came, picking my way carefully along the crest back to my ascent spur, then turning East and down. Just before I did, I caught a glimpse of a tiny worm moving slowly across the mud flats to the Northwest. It was a train moving Eastward along the causeway, seen here magnified 12x. 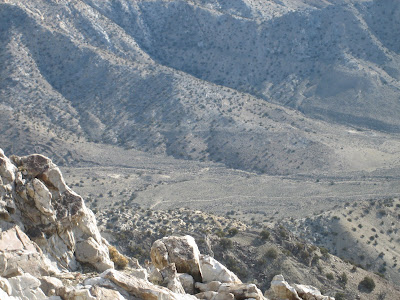 On the Stage 2 descent I used telescoping aluminum ski poles to help steady myself and pick my way down with greater confidence. I never use them ascending, but coming down, when my legs are a bit worn, I like having the extra confidence. 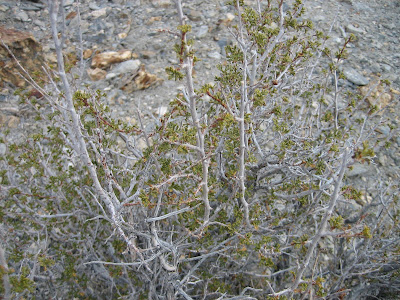 It may seem sometimes that practically everything in the Great Basin is wind-pollinated, but the third common shrub in the Newfoundlands, Bitterbrush, is normally insect-pollinated, although it can also opportunistically wind-pollinate when it occurs in large stands. Bitterbrush, Purgla glandulosa, and the closely-related Antelope Bitterbrush, Purgla tridentata, often occur in mixed stands with Sagebrush. Unlike Sagebrush, it’s not generally self-compatible (i.e. it can’t fertilize itself) and it’s seeds, like those of 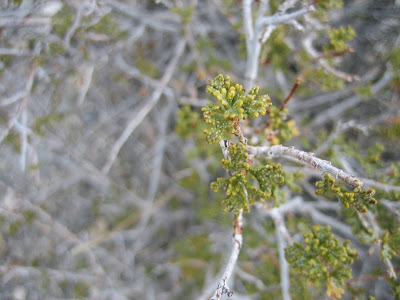 Blackbrush, require a dispersal agent, usually rodents or ants to cache them in a suitable location for germination. One of the most important ways in which Bitterbrush differs from Sagebrush is its palatability, not only to wild animals (deer and pronghorn eat it all the time) but also to domestic livestock, particularly sheep and goats. (The leaves are about 14% protein.) As a result, in heavily-grazed mixed stands of Bitterbrush and Sagebrush, the Bitterbrush gets munched and the Sagebrush dominates. Bitterbrush follows the tough-cuticle leafing strategy of Blackbrush, and it’s well-adapted to drought, with a taproot than can reach down more than 15 feet below ground.

First, it can reproduce through “stem layering”. In stem-layering plants, a branch or stem that happens to be close to the ground can grow “adventitious” roots directly into the ground. Later on, the adventitiously-rooted stem becomes separated from the main plant; it continues to develop as an independent plant. Reproduction by cloning is fairly common among plants, but unlike the root-level cloning of , Gambel Oak or Creosote, in cloning via stem-layering the extension happens all above-ground. 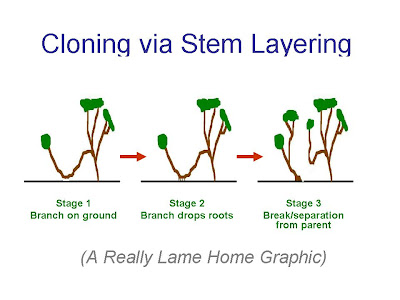 The second cool thing is this. I mentioned above that sheep can and do munch happily away on Bitterbrush. They can also eat Horsebrush (Genus = Tetradymia, several species). But if Sheep eat Bitterbrush followed by Horsebrush, they get way sick. Apparently there’s a deadly combination of chemicals, almost a staged poison, that develops when the two are consumed together.

Tangent: I’m pretty sure I once experienced a similar effect when I consumed large quantities of milk and guacamole together right before a mtn bike ride. 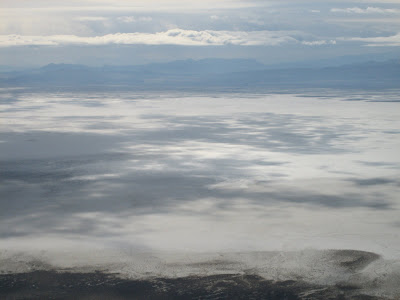 When I returned to the truck I kicked back in the sun and drank a beer, watching bumblebees buzz around the shrubs. All of the bumblebees I saw had distinctive orange wings, which I don’t know the significance of.

I made the long trek back across the mud flats and to the city without incident, stopping for a mtn bike ride on .

Tangent: The mtn bike trail on is interesting but not outstanding. As a rule it’s worth stopping for a ride if you happen to be driving past, but it’s not really worth the 95-mile round trip from Salt Lake just to ride it. It follows an old shoreline of ancient , which makes for a pleasant trail layout, and it’s usually ride-able earlier and later in the season than the trails in the 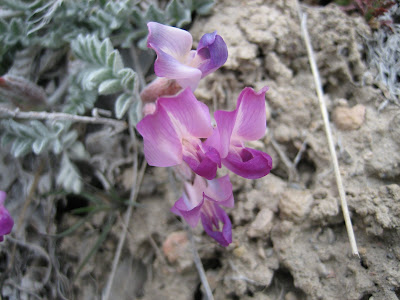 The ride was a mixed bag- several Western Meadowlarks near the trails head, but much of the trail was cattle-trashed, with hoof-prints and manure. (I was already spoiled by the .) But the highlight was my second true wildflower of the season: Utah Milkvetch, Astragalus Utahensis. Is this baby a beauty or what? Like the Glacier Lilly, Utah Milkvetch is a “perfect” flower, one of the first to pop up after the snow melts, and is pollinated mainly by various wild bees. But while Glacier (or any) Lilies are “regular”, or actinomorphic, milkvetch is “irregular” or zygomorphic. An actinomorphic flower is one that is symmetrical with respect to any line that bisects it when you look at the flower head-on. But with a zygomorphic flower, there’s only one possible way you could bisect it that would result in two symmetrical halves. So we describe a Glacier Lily as having perfect, regular flowers, while a Utah Milkvetch has perfect, irregular flowers. 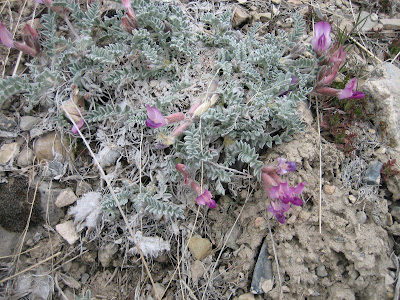 Astragalus is a genus of over 2,000 herbs and small plants across the Northern hemisphere, and is a member of the Legume family. Several Asian species are used in traditional Chinese medicine and supposedly you can buy their extracts in some health-food stores.

All told, it was a great weekend. I got home and worked till past midnight, preparing for a busy work week.

Is Utah Milkvetch also known as locoweed, nonpoisonous to livestock?

Sorry, I meant poisonous, not nonpoisonous. I do love that flower and it's fuzzy seed pods. I'm going to try and get it to grow on my hillside, but I'm worried the dogs might eat it...thus the question.

Max- Short answer: yes, it's poisonous to livestock, but I don't know how much of a threat it would represent to your dog. More info here. (See under Astragalus.)