State of the Season, and Why I Like Osmia Bees

Today I have a quick 2-part season update, and new flower.

Down in the Valley 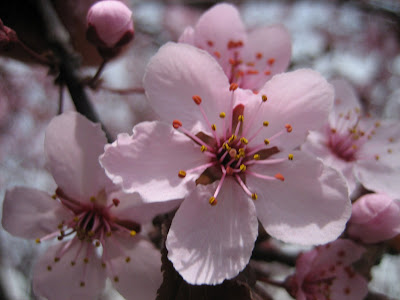 Spring is in full swing down in suburbia/office park land.

Tangent: years ago I had a sales territory in the San Francisco Bay Area (I’ve worked in technology sales the last 20 years.) Every week or so I’d fly out from dry, cold Denver to the warm Bay Area and go from one lush, beautiful office park to another, and there were always all these amazing plants there growing in the wonderful mild climate. I had this great idea to write a “Botanical Guide to The Office Parks of California.” 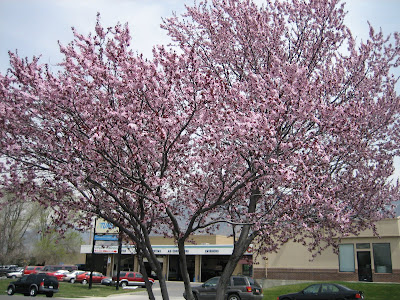 So many trees are in bloom every where you drive in the valley- pink, white, magenta. The valley trees are almost all non-natives, and without real leaves yet even tougher to ID than normal, but they’re still wonderful to gawk at. These pics are of a lovely looking (and smelling) tree by the state liquor store on

Across the street, my neighbor has 5 Chandelier Pear trees in his front yard. For me, when these trees bloom, it's the wake-up call that Spring is really, finally here. They look lovely, but smell, strangely, like rotting meat.

Up in the Foothills

Yesterday I rode up in the foothills at dawn before work. 4 things worth mentioning: 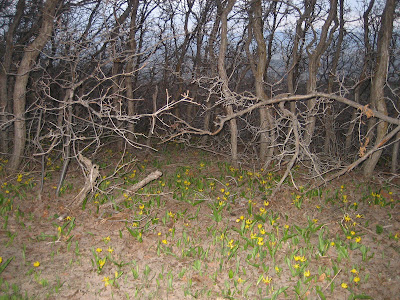 First, Glacier Lilies are everywhere. They seem to do especially well in the woodland floor of the (still-bare) oak stands, such as in this photo. They’re so plentiful now, if only I could manage to dig up a corm intact I could probably live up here for several days… 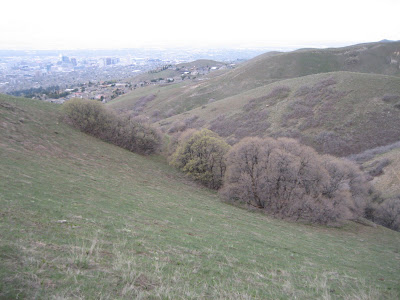 Second, the maples are budding. Way back when, I mentioned that the foothills are dominated by 3 trees- Big-tooth Maple, Gambel Oak, and Curlleaf Mountain Mahogany (which is evergreen.) The maple and oak are both bare in the winter and green in the summer, but- from a distance- are easiest to distinguish in the early Spring and late Fall. 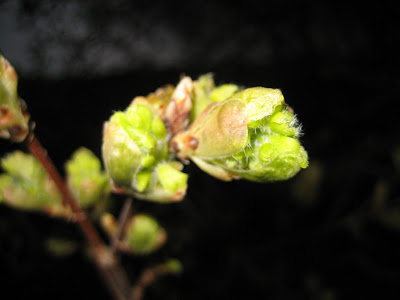 The maples leaf out a ~2 weeks earlier and their leaves turn and drop probably 2-5 weeks later in the Fall. Why this should be I have no idea. I once asked Professor Chuck (whom I’ll introduce when I talk about oaks) what the reason was, he answered, that “they’re completely un-related, they have totally different physiologies. There’s just no comparison!” in an almost incredulous tone, as if I had asked him why ducks don’t play golf…

In the Wasatch foothills, the maples tend to dominate in the (comparatively) well-watered draws, wile the scrub-oak dominates on the open hillsides. As a result right now, the hillside branches are all still bare, while the draws are decorate with a light dusting of lime green. It’s pretty, and looks almost lush after the long winter. 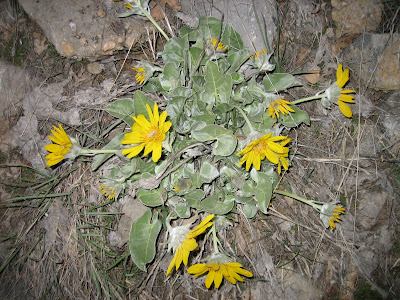 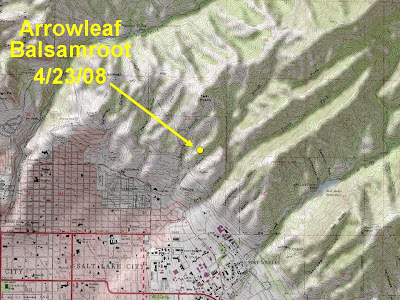 Third, another “real” flower has appeared. And this one will soon dominate the hillsides above down in an explosion of yellow. This is Arrowleaf Balsamroot, Balsamorhiza sagittata, a decent-sized, very recognizable composite flower. Unlike a dandelion, Arrowleaf Balsamroot has both disk and ray flowers, more along the Sunflower model. It has a taproot that extends down as far at 8 feet deep and can grow up to 4 inches in diameter. 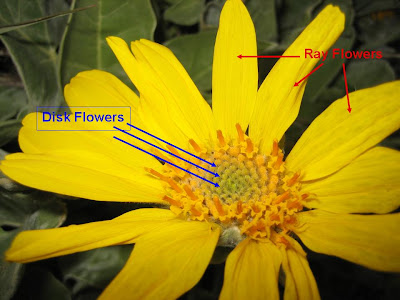 Arrowleaf Balsamroot flowers are pollinated mainly by 2 species of Osmia bee. Osmia is a genus of wild bees, typically black or blue in color. They hatch in the Springtime (males hatch first, for reason apparent in a moment.) They mate as soon as possible after hatching (lousy role-models for your teenagers) and the males die promptly afterward. The females spend the rest of the spring and summer collecting pollen for a “larder” they provision in their nests, which are typically little holes in soil or wood. Unlike honeybees, Osmia bees are solitary, not social, so there are no swarms or hives or sterile workers associated with these bees. At the end of the summer the females lay eggs in their nest larder. The female eggs are laid furthest back, and the male eggs closest to the entrance, which explains why the males hatch first the following spring. The female then dies, never knowing her offspring, who will repeat the cycle the following year.

Tangent: I’ve referenced the bizarre details of bee reproduction before, and it’s way fascinating. But it’s long and complicated, so I’ll save it for another post. 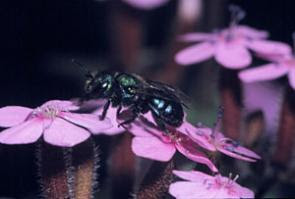 Whimsical Not-Very-Helpful Tangent: I love Osmia bees, and solitary wild bees in general, because they seem so “off-the-grid”. These guys are the bee equivalent of the guy (or gal) who just says “no” to the office job and the country club and church and PTA meetings and the whole rigamarole of society and just does his/her own thing. Yeah life may be a little tougher, but then again, unless you’re the queen, a honeybee’s life ain’t all that sweet either. (Yes I know that drones can laze around for quite some time. But after mating season, they’re typically driven out or killed by their worker-bee sisters.) I think deep down, I’m Honey Sapiens who wishes he were an Osmia Sapiens. 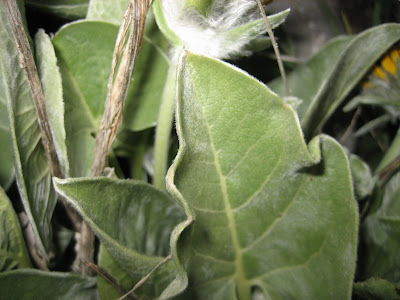 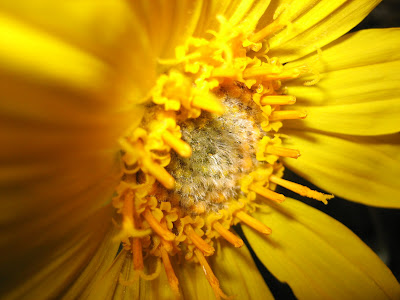 Serious, Helpful Tangent: The flower that’s most similar looking to Arrowleaf Balsmaroot and easiest (for me at least) to confuse it with is Mule’s Ear, Wyethia amplexicaulis, which is also pollinated mainly by Osmia bees. The way to tell them apart is that the leaves are remarkably true to their names: An Arrowleaf leaf really is shaped like an arrowhead, while a Mule’s Ear leaf is long, ovaloid (is that a word?) and pointy-tipped, like a… right, a mule’s ear. Also, Arrowleaf leaves are covered with fine, tiny hairs, while Mule’s Ear leaves are smooth and shiny. 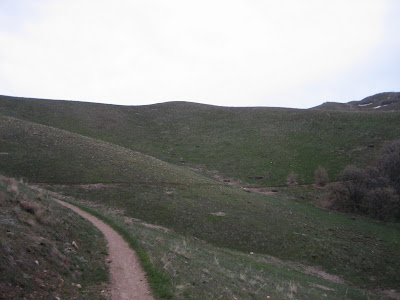 The fourth and last thing is the grass, which has been green in the valley for a while, but is just now becoming really green on the foothills. And while grass may not sound very exciting, it’s important that we talk about it before the end of the week, because next week is Monocot Week.