Steller's Jay and the BTCC 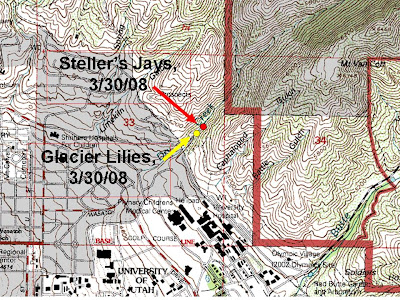 On last Saturday’s ride up Dry Creek, right after the Glacier Lilies, I came across a group of 4 Steller’s Jays. Stellers Jay is one of the easiest to recognize birds in the West, and was probably the first bird I learned to recognize when I relocated from to almost two decades ago.

My last 3 years in Colorado I lived in house set in a Ponderosa pine forest, just under 8,000 feet, about 30 miles West of Denver. The Steller’s Jay was a common bird around the house, and it quickly grabbed my attention for 2 reasons. First, it looked exactly like a “Negative Blue Jay”. Its form and size are almost identical to the Blue Jays I knew from back Eat, but on the crest and head where the Blue Jay is white, Steller’s Jay is black. 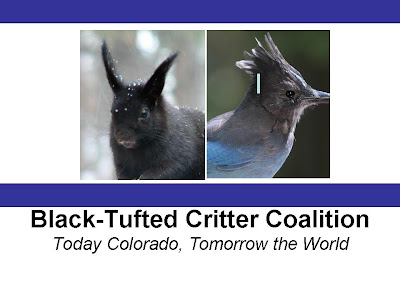 Tangent: The second reason Steller’s Jay’s caught my eye, was because of their weird visual similarity to Abert’s Squirrel. Abert’s Squirrel is a large-ish tassle-eared eared squirrel that subsists off seeds and other parts of Ponderosa Pine. The Abert’s Squirrels around my house were all black, and the black tufts of fur sticking up from the tops of their ears looked an awful lot like the black tuft of feathers sticking up from the tops of the heads of the Stellers Jays and if I were just a bit more unbalanced than I am anyway I might have thought they were all part of some secret black-tufted coalition of small forest critters… 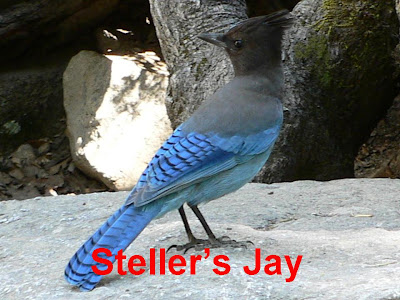 Steller’s Jays are Corvids. Corvids are a family of birds that include crows, ravens, magpies, jays, nutcrackers and jackdaws. There are over 100 species of corvid across 26 genera, and they all have the following in common:

One of the 26 corvid genera is Cyanocitta, and it contains exactly 2 species: Cyanocitta stelleri, the Steller’s Jay, and Cyanocitta cristata, the Blue Jay. Together, these 2 jays are the only crested Jays in . The ranges of Steller’s and Blue Jays hardly overlap at all, though together their ranges cover nearly the entire continental US, Southern Canada, and much of . Apparently when the 2 species do meet, they occasionally hybridize. There was a group of 4 hybrids that were captured and studied in 1969 in and more recently this hybrid (pictured) was spotted in 2004 in Couer d’Alene, ID.

I don’t believe the hybrids have been studied well enough to determine if they themselves are fertile, which in turn would raise the question of whether Steller’s and Blue Jay are in fact separate species at all, or merely varieties of the same species. And that in turn raises the whole thorny issue of what is a species, which it as it turns out is remarkably unsettled, and gets even more confusing when you consider plants. (I’ll come back to this later in the season when I talk about hybrid oaks.) Neither jay migrates in the traditional North-South sense, though Steller’s Jay generally relocates higher or lower in altitude depending on the season.

Steller’s Jay is a handsome bird, but like the guys your teenaged daughter brings home, seems to be better at looking good than it is at excelling at any one thing. They eat everything from pine nuts to acorns to insects to the eggs and nestlings of other birds. Technically, Steller’s Jay’s are “pine birds”, adept and collecting, caching, and later relocating pine nuts for future consumption, but they’re really sort of a fair-to-middling pine bird. They’re certainly more adept at the pine nut trade than the scrappy Scrub Jay (who is really more of a “pine-opportunist”) what with their expandable esophageal pouch and greater flight load capacity (4X that of the Scrub Jay), but they pale in comparison to the more finely developed Pinyon Jay, with its even greater flight-load capacity (3X that Steller’s Jay) and hairless nostrils (to avoid clogging with pine pitch.) 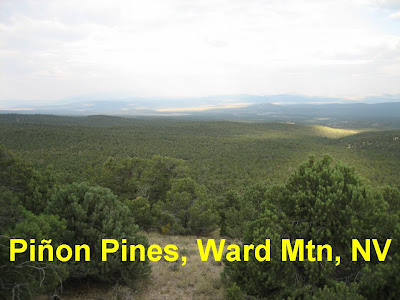 But the most interesting thing about Steller’s Jay as a pine bird is that its relationship with pines is sometimes mutualistic and sometimes purely predatory/parasitic. With piñon pines, the relationship is mutualistic; Steller’s Jays collect and bury seeds, usually within a couple of miles. They later return to dig up and eat the seeds, but almost never recover all of the buried seeds in a given season, and some of the remaining seeds germinate into new piñon pines. (In fact, since Steller’s Jays typically nest and often cache seeds at slightly higher altitudes than piñons typically grow, it’s been speculated that the caching activity of Steller’s Jays specifically may actually help extend the range of piñons to higher elevations during periods of warming climate, such as we’ve experienced following the end of the last ice age, and apparently are again now.) 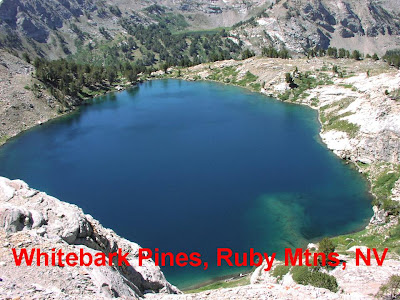 But with Whitebark pines the relationship is predatory; Steller’s Jays harvest and eat the seeds, and sometimes cache them, but never in soil, such that no seed ever taken by a Steller’s jay ever germinates.

I found Steller’s Jay attractive from the first time I saw it. But I find that when I become aware of these complex, multi-faceted relationships, a given bird or bug or plant almost always becomes much more interesting and wonderful.