Meanwhile, back in the foothills... 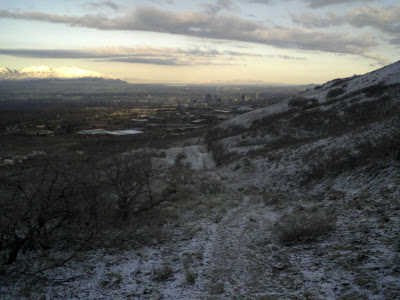 So part of the reason I wrote so much about the is because it’s such a cool place. But the other reason is that the weather here in the Wasatch foothills this past week has sort of sucked. Repeated rain and snow and cold. So it seemed a good week to delve into the desert shrubs and get some botany basics out of the way. Here’s a pic (via lame camera-phone) I took on yesterday morning’s before-work mtn bike ride- a dusting of snow, but at least in that case, not enough to mess up riding (till the sun hit it anyway.)

Tangent: This happens to be a really good shot of the “Roller Coaster”, a popular SLC ride across the street from the zoo, ½ mile from my house and a trail I ride all the time. You can see the distinct rollers in this shot; they’re set up so that momentum off one roller carries you to the top of the next. The trail is dark and clearly visible, not because it’s been ridden since the snow (a moment later, I was the first,) but because when it snowed the night before the ground wasn’t yet frozen and so snow only stuck to the grass and shrubs. Then overnight the ground froze and voila- not bad pre-dawn riding conditions… (Did I really say “voila” in my blog? That is so gay…)

But this weekend a nice warming trend is supposed to start; they’re saying high 70’s by early next week. And I am psyched. Not just because I’m sick of snow and sleet and Winter (I am) but because I just know Spring will hit with a vengeance next week. Buds are poking out all over, grass is turning green, man I am telling you Spring is teed up! I have never been more ready. I know more about birds and botany than ever before, I’m in great shape, and when I’m out and about my eyes are sharp and primed for detail. I feel ready to go. ¡Oye Primavera- vamenosya!