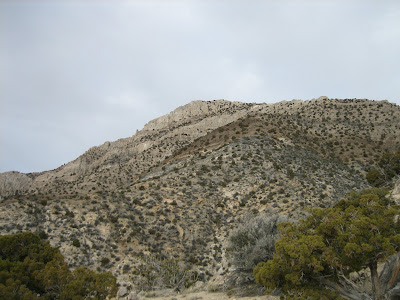 I camped Saturday night up in . Dawn Sunday was silent; no birds, no crickets, no jets overhead, no real wind. Just really- almost spookily- quiet. I cooked breakfast in my sleeping bag by headlamp, packed up my gear and started hiking up by 7:45AM.

Generally, almost all of these trail-less, low-altitude peak scrambles follow a similar 2 or 3-stage ascent methodology. In the 2-stage mode, you hike up the East-West running ridge of a side spur (stage 1) to the crest of the range, then (stage 2) make your way along the crest to the peak. In the 3-stage version, you hike up the ridge of a North-South running side-spur (stage 1) to the ridge of the ridge of the aforementioned East-West running spur (stage 2) to the crest of the range and then work your way along the crest (stage 3) to the peak. Get it? It’s simple, the most important decision being which side and side-side ridges to use. 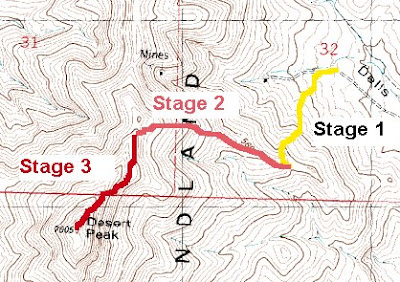 So I worked my way up a few hundred feet up heading South to the main East-West spur bordering Dell’s Canyon on the South, and started hiking up the spur-ridge. The going was moderate-to-easy, the footing excellent, and I had plenty of time to look around.

Even though the Newfoundland Mtns are only about 85 miles from the Wasatch foothills, and at a similar altitude, the vegetation is completely different. For starters, the oaks and maples are completely gone. Gambel Oak occurs up and down the Wasatch and clear across the Colorado Plateau, but the mark its Western limit. Maple makes it one more range West, to the , then it too stops. Mahogany, though it continues out across , requires more moisture than a sub-7,000-foot Great Basin range affords, and is also absent from the . In fact, the only tree at all in the entire range (and the nearby Cedar range, and the nearby , or on , or the , etc.) is Juniperus Osteosperma, the Utah Juniper. 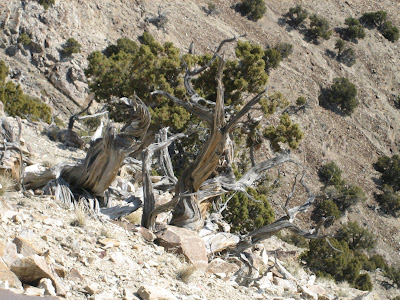 Junipers are so common in the intermountain West that we hardly think of them, which is a shame, because their design is impressive; they are incredibly tough, durable, long-lasting trees.

Most of the plants and trees I’ve mentioned so far- oak, maple, willow, mountain mahogany- are angiosperms. And from an outside observer’s perspective, you could say that angiosperms have conquered the world. There are over 300,000 species of known angiosperms in the world- trees, grasses, shrubs- and only 600 some-odd species of conifer. But the conifers still dominate in some of the toughest, most challenging conditions, and Utah Juniper is a great example.

Utah Juniper has at least 3 key adaptations that make them particularly well-suited to the extremes of the .

First, the leaves are tiny, overlapping and scale-like. This configuration means that the Juniper loses less water than a conifer with distinct needles, like a pine.

Second, they have a taproot that extends up to 15 feet underground and lateral roots up to 100 feet away from the tree. Utah Junipers competes super-efficiently for soil moisture, and in Drought situations often out-competes the understory layer of desert shrubs.

Third, Utah Juniper has beefed up the very structure of its wood to resist the damaging effects of drought. Specifically:

The wood of all conifers, and all dicot angiosperms (I’ll explain that term in a near-future post) has a very similar architecture. So similar that it’s a strong indicator that these trees all descended from an ancient common ancestor. The setup is like this in a cross –section. 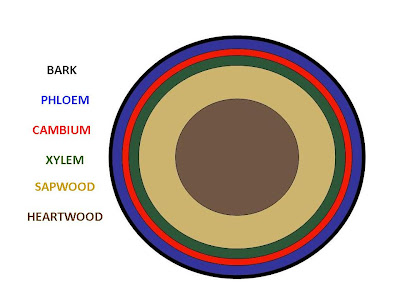 The cambium is like a layer of stem cells, undifferentiated cells, that turn into either phloem or xylem. Phloem carries the products of photosynthesis to the various parts of the tree. Xylem carries water up from the roots and to the branches and leaves. The force that carries the water up the trunk is the suction/vacuum of the water, like when you drink through a straw. As water evaporates through the stomata (pores) of the leaves/needles/scales, more water is drawn up, continuing the straw action. The tension in the super-thin xylem tubes is extremely high- like a piano wire.

But if the water column is broken, and an embolism, or air bubble, develops, the water tension is lost, and the branch ,section or even whole tree can die.

Side note: this seems to be the ultimate factor limiting the height of very tall trees, such as Coast Redwood. Mathematically, the xylem/water column/tension model breaks down around 400 feet high, and in fact many redwood have dead top spires as a result of embolisms.

But several species of desert-adapted juniper actually reinforce their xylem with extra woody tissue, making their xylem tubing more embolism-resistant, and maintaining the structural integrity of their water columns even in times of severe drought stress. Where embolisms do develop, the branch or section dies off, and the rest of the tree continues living and growing just fine. 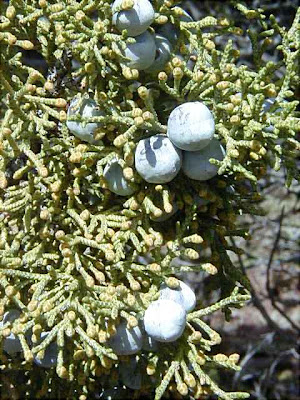 Utah Juniper can live for several hundred or even over a thousand years, and doesn’t start producing seeds for at least 30 years. Like all conifers, junipers are wind-pollinated (most Utah Juniper is monoecious, but about 10% are dioecious, bearing only male or female cones), but require a dispersal agent for the seeds. Juniper cones are super-compact spheres, commonly (but erroneously) called “berries”, each of which bears 1 or 2 seeds. The seeds are commonly dispersed by various critters, such as jackrabbits, eating the “berries” and then passing the seeds. The passage through the digestive track actually speeds germination. 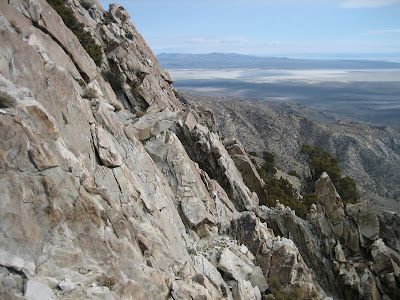 As stage 2 ended and I reached the ridge, and as I began the crest traverse (stage 3) the ground footing and handholds became loose and treacherous, and picked my way gingerly to avoid a tumble. Here’s a pic of a typical crest section. The views both East and West were spectacular; this is the only range that I know of with salt flats on both sides. 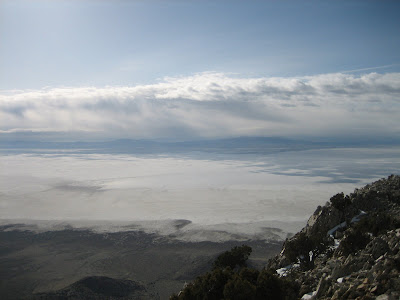