Why does Every Bug end up on my Windshield? 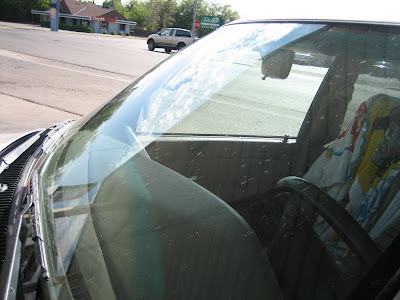 So I found out something cool on the drive down to Hurricane Sunday evening. One of the downsides of Interstate highway road trips in Spring/Summer is bugs. Especially when a couple of big goopy ones splatter right in your eye-level line-of-sight and then petrify onto the windshield by the time you reach a gas station with a windshield cleaner. 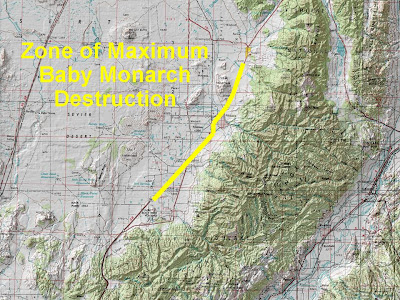 Today around Fillmore my windshield got absolutely walloped by several dozen, large, yellow-gutted bugs. In Beaver I pulled over for gas and the attendant washed my windshield

Tangent: On trips South from on I-15 I always stop for gas at the Chevron at the Southern Beaver exit. They always wash your windshield and finish pumping your gas while you run inside (at self-service price), are super-friendly, and the restrooms clean.

The attendant and I recognized each other from last week, and we joked about the number of bugs on my windshield. I mentioned that I’d been hit hard around Fillmore, and he said that the bugs are actually baby Monarch Butterflies, which in the afternoon are attracted to the relative warmth of the air above the road blacktop, and unwittingly become windshield-kill in large number. He said he’d learned that years ago from another traveler- presumably someone with a bit of entomological knowledge. 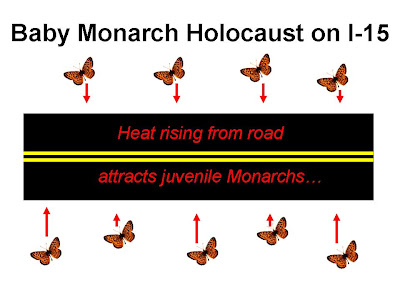 Tangent: Monarch butterflies have a fascinating migration pattern, traveling from all over the and every Fall to winter in the mountains of , between and . 2 years ago I happened to be in in February, a mere 3 hours from the Monarch preserve. But I had to be in Zacatecas by nightfall and couldn’t spare the time. Today I dearly regret my poor trip planning; I’ve heard the swarms of Monarchs are a sight to behold, and I wonder when I might ever again be back in the neighborhood of ...

The attendant’s tidbit on the baby Monarchs made me wonder what else he’s picked up over the years from passing travelers. It’s not a benefit of the profession I’d previously considered. 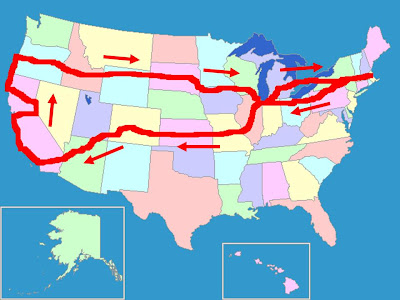 Another Tangent: 20 years ago, a friend and I did a cross-country motorcycle trip. It was a fantastic month; we traveled from to to the coast and back, making in effect a large triangle. In the West we avoided Interstates entirely.

On many days (the trip was in May) we hit many, many bugs. Bugs on our motorcycles, our helmets, our jackets and our visors. One day, around Vale, , the bugs were so bad as we followed a winding highway along a river shortly before dusk, that we had to stop every 10 miles or so at gas stations to pick up the windshield wiper/cleaner, and quickly swipe our visor free of bug guts.

On the very last day of the journey we mad our last stop at a rest area of the Massachusetts Turnpike. We spent a few minutes playing with some estimates of surface area, # of days, etc, and came up with a rough estimate (we were both electrical engineers at the time, a couple years out of school and still pretty handy at math) that between us we had killed roughly ½ a million insects during our month-long journey.

Oddly, I just realized that we began that motorcycle trip on April 28, 1988. Exactly 20 years to the day. How weird is that…

Today I revisited 2 of the locations I visited last weekend: the relic Ponderosas on Little Creek, and the flowering Blackbrush on Hurricane Rim. The Hurricane Rim ride was my best wildflower ride ever. I have a camera full of pics, but I'm at the hotel in Vegas, finally finished working, and am just to wiped to blog them tonight...

Yeah, bugs aren't exactly what you want to see right in front of your face. LOL. That's a lot of bugs on your windshield. It's a good thing that the attendant was nice enough to shove them away and wash your windshield. =)