OK, I’m back! What a week- lots of work, lots of adventure, LOTS of driving and no free time to blog. But now I’m back safe and sound and ready to catch up. This is the first of 4 posts covering Monocot Week, only 2 of which- ironically- have anything to do with monocots. 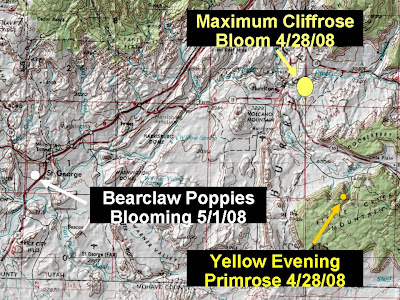 People are always going on and on about desert wildflowers. “Will this be a good year for desert wildflowers?” “Someday I hope to visit the desert during peak wildflower season, blah, blah…” Well, this past week I hit it perfectly, 100% dead-on. Best wildflower week ever. We’re talking Wildflower Home Run. While riding and hiking I saw so many great wildflowers I could probably spend a month just blogging about all the great wildflowers I saw this week. In this post I’m going to touch on 3 of my favorites from the week. The first I chose because I was practically assaulted with its beauty and scent throughout the week; the other 2 because of the fascinating glimpses they provide into the elegance and complexity of desert botany. 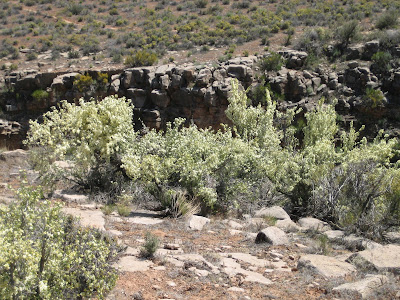 On Monday I rode the Hurricane Rim trail again, this time with camera. What a difference a week makes. The Blackbrush was still out in force, but the real gem of the ride was the blooming Cliffrose, completely absent just a week before. In spots it occurs in dense “groves", like this one here. The flowers give off a sweet smell and are humming with tiny wild bees. 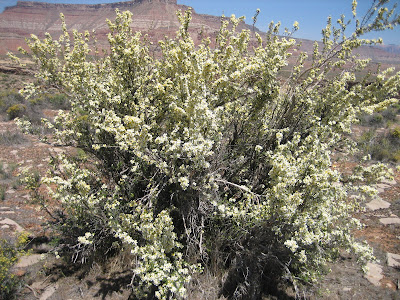 Disclosure: Cliffrose, Purshia stansburiana, is closely-related to Bitterbrush, Purshia glandulosa, and in fact they frequently hybridize. The leaves in particular are really confounding. The surest way to tell them apart is the flowers, which is what enabled me to finally ID them all- at least around Hurricane and as Cliffrose. I mention this, because of the awkward possibility that the Bitterbrush-that-saved-my-life may be in fact… a Cliffrose… In fact, I'm pretty sure it is. Guess I’ll have to plan to ride that trail again this time next year…

The second flower I’ll mention is the lovely Yellow Evening Primrose, Oenothera howardii. This flower typically gains a foothold by pioneering rough, dry, sandy or pebbly patches of ground in the desert, and that’s exactly where I found this one, in an otherwise-bare patch of sand in a crevice separating 2 slickrock slabs, up on Little Creek Mountain, in the area of the relic Ponderosas I wrote about last week. 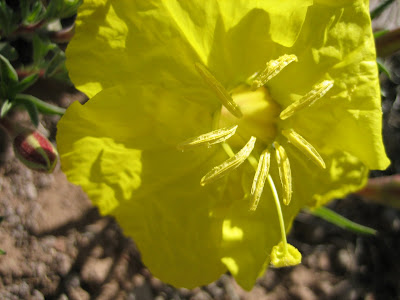 There are over 100 species of Oenothera, in all different colors. One of the distinctive features of Evening Primroses is that the stigma always has 4 branches, and forms an “X” shape. Here’s another cool but really weird thing about Evening Primose. WARNING- This next part is super-geeky-complicated: Plants and animals (including us) create sex cells via meiosis, whereby sex cells are created with just half the number of chromosomes. So if a person, for example, has 46 chromosomes, a human sperm or egg has only 23. During the actual splitting process of the DNA strand/chromosome pairs, there’s often exchange between the paired, homologous chromosomes. (Homologous means chromosomes that contain similar info to do the same thing; for example you have 2 copies of the “same” chromosome at location, or locus, number 7 (out of 23)- one from your father and one from your mother.) This recombination of DNA allows you to mix up the genes your mother and father gave you into new combinations in the sperm or egg cells you reproduce. 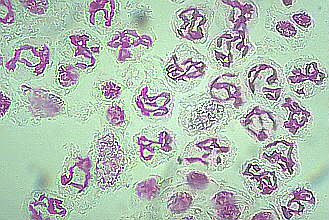 Now here’s the weird part. In Oenothera (which has 14 chromosomes) during meiosis, the chromosomes don’t line up in nice, neat pairs; instead, they arrange themselves in circles (pic left) and frequently exchange genes between non-homologous (heterologous? heterozygous?) chromosomes.

It’s as if during meiosis in your body, a hunk of the copy of chromosome you inherited from your mother at locus #7 was transferred over to the chromosome you inherited from your father at say, locus #19. These exchanges are called translocations and they mean that in Oenothera reproduction all kinds of wacky things are going on that make reproduction, hybridization and evolution really strange and complex. 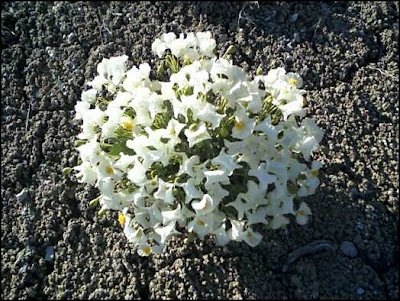 The last flower I want to mention is beautiful, endangered and a real rarity: the Bearclaw Poppy, Arctomecon humilis. The Bearclaw poppy lives only in a small area in extreme , almost entirely within the greater St. George metro area. It grows exclusively on clayish desert soils (ground that is pretty tough for most other plants.) And these desert soils tend to be exactly where most development and/or ORV traffic around St. George is taking place.

St. George has a beautiful desert preserve in GreenValley, just West of Bloomington, and in Green Valley there’s a wonderful mountain biking trail called “Bearclaw Poppy Trail”, because it’s lined with… that’s right, Arctomecon humilis. I’ve ridden the Bearclaw Poppy Trail several times over the years, but never before while its namesake flower was in bloom, which I snapped with the hated camera phone. 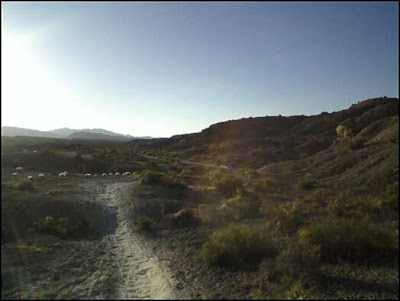 Tangent: This trail rocks. When dry and un-rutted, the dense clay is as hard as pavement but smooth as silk, with outstanding cornering traction. It’s short, the climb is easy, and the descent thrilling. And it’s a hop and skip from I-15. Poppy bloom or no, the Bearclaw Poppy trail is always worth a quick detour.

Disclosure: I actually hit this trail Thursday on my way home, after my yet-to-be-blogged Mormon Mountains-Adventure/Fiasco, but it made more sense to post about it in this here dedicated desert wildflower post… 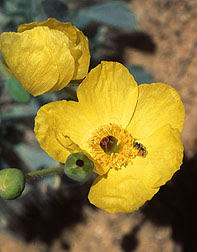 A rare, endangered, beautiful, endemic flower is wonderful enough to mention just for existing, but it turns out the Bearclaw Poppy has a great pollination story as well. It’s pollinated by only 3 species of bee, and by far the most important is a tiny, solitary species of wild bee called Perdita meconis (pictured left). Perdita is a genus of several hundred different species of bees- all tiny and solitary- native to the Southwest. But what makes P. meconis so interesting is that it is monolectic, meaning that so far as is known, it only takes pollen from Bearclaw Poppies, and no other flower. This relationship means that not only is the Bearclaw Poppy endangered, but apparently so is solitary little P.meconis.

This is a long enough post, so I'll stop going on about wildflowers. But I'll post just a few pics of the many other beauties I saw on my ride below: 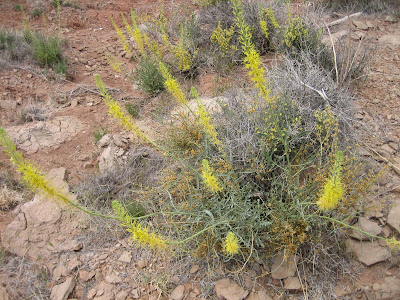 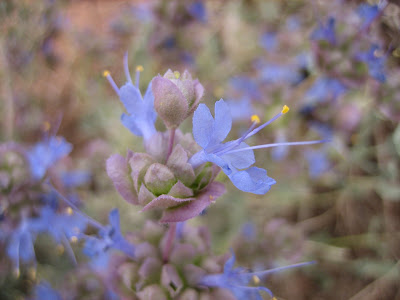 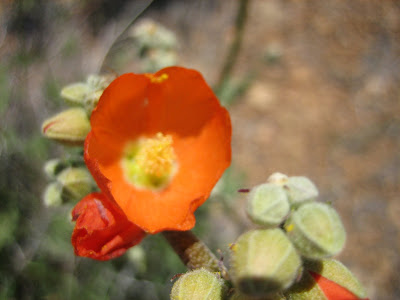 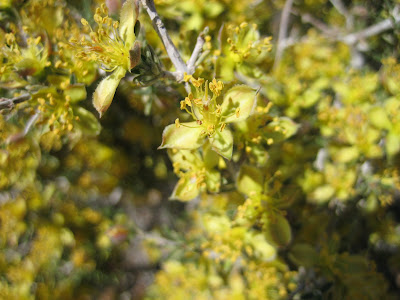 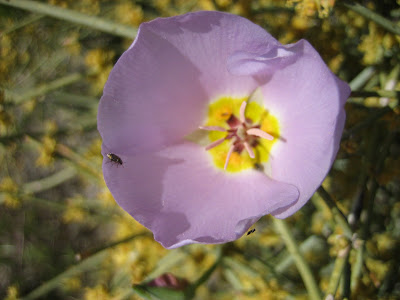 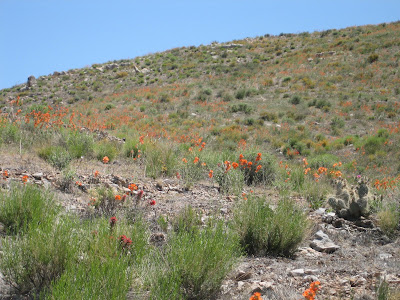 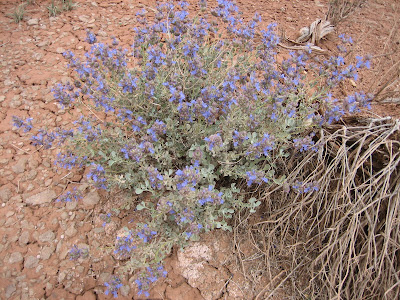 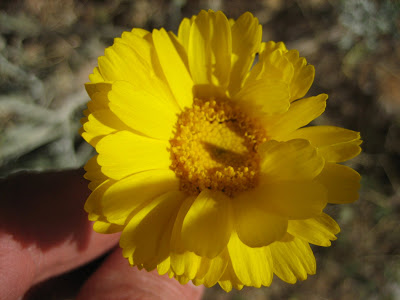 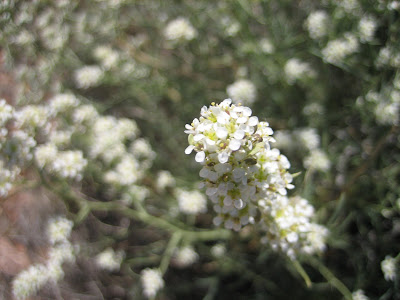 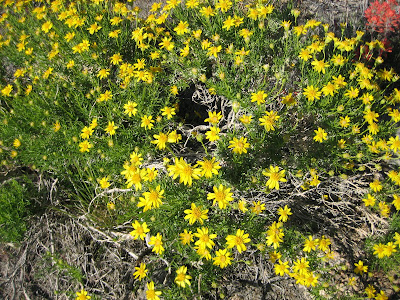