So I need to get back to the subject of weeds, and I’ve got an important one to talk about, but first a couple of other things:

First, I’m under the gun time-wise, because I’m headed out Friday night for a 4-day backpack trip down South, near the . It’ll be a great trip, and I’m sure it’ll give me something good to blog about, but from a Wasatch foothills standpoint, the timing is lousy. Because right now, the Scrub Oak is leafing. Gambel Oak is probably my favorite foothills plant; I’ve been waiting ever since last November for this time, and I hate to leave now, even for a few days. But the good news is that the bloom is staggered with altitude, and even clone by clone (I’ll explain clones next week) and so I’ll still be able to find Oak in various stage of bloom for the next week or two, if I’m willing to get around a bit (and I generally am.)

So next week when I return, I’ll turn my “blocus” (blogging focus) to Oak, and in the meantime I’ll get back to weed week before I head out of town. 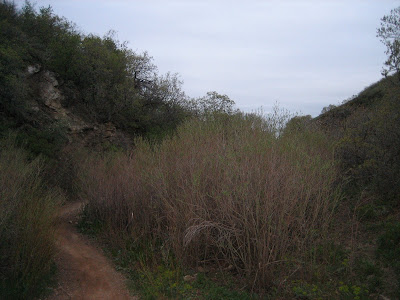 Second, I made a point of riding the Shoreline trail this morning, knowing it was in transition and that the Arrowleaf Balsamroot bloom would be peaking. I also got some great Maple flower pics, and I was happy to see that the stand of Coyote Willow, Salix Exigua, (pic right) at the mouth of Dry Creek is finally blooming- nearly 2 months after the Globe Willows, Salix Matsudana, down in the valley. 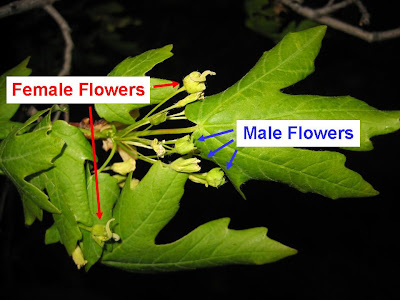 So here’s (left) a great Bigtooth Maple flower shot. And I think (not sure) that I can distinguish between male and female flowers. (This was hard to figure out- I used online pics of Sugar Maple flowers for reference.) 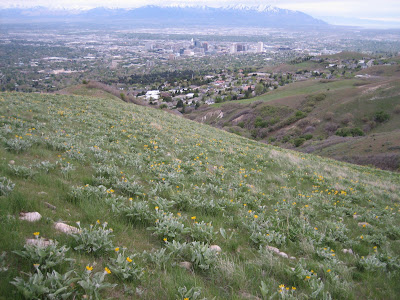 Here’s a shot (right) of the Arrowleaf Balsamroot in bloom; the location is almost the same as the blog masthead shot (which was taken in 2003.) 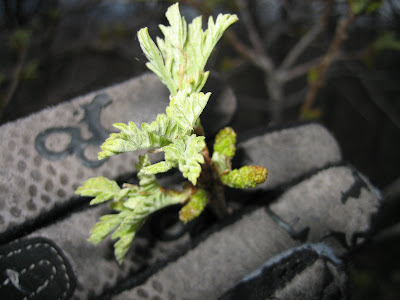 And here’s a shot (left) of some brand new immature Gambel Oak leaves and male catkins (flowers), in a stand along Shoreline as you climb out of Dry Creek.

So back to this week’s topic- weeds! On my ride Monday afternoon, as I climbed out of City Creek, shortly after exiting the Maple forest/Green Tunnel, the hillside was covered with this guy, Dyers Woad, Isatis Tinctoria. 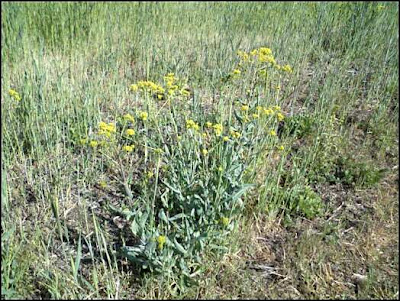 Tangent: Anything with the word “Woad” in it is a great name for a weed. When I first heard the name of this weed, I had no idea what it was, but immediately thought, “anything with the word “Woad” in its name has gotta be trouble…” As it turns out, Dyers Woad, is the only “Woad”; there are no other “Woads”. Which is a shame, because it’s such a great word. It would be great if there were other Woads, like “Desert Woad”, or “Black Woad”, or “Flemish Death Woad” or somesuch…

Dyers Woad is native to the Caucasus and Central Asia (I am telling you- like all the really nasty weeds come from Asia…) There are about 30 species in the genus Isatis, which in turn is a member of the Brassicaceae, or mustard, family, which explains why Dyers Woad’s flowers are mustard-like in form. Dyers Woad has been cultivated in Europe for centuries; until trade to India opened up in the 16th century, it was the only source of blue dye available to Europeans (hence the “Dyers” part of the name.) The popular story about Dyers Woad is that was imported into the new world for the dye. But true or no, it seems pretty certain that it came to the Western US in the early 1900’s and has been traced to 2 shipments of Irish alfalfa seeds- one to Utah, one to Northern California, that were contaminated with Woad seeds. 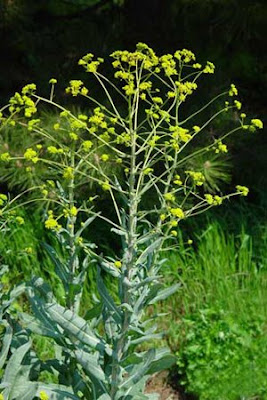 Woad ranges in height from 1 to 4 feet, with a 3 to 5 foot long taproot. It grows fast- up to 4” in a single day under ideal conditions. It flowers in April or May (like now) and each plant produces several hundred seeds, each encased in a large, tough, black seedpod (1 seed per pod.) Woad is completely unpalatable to livestock (or most anything else, so far as a I know.)

So it’s inedible, fast-growing, and fast seeding- all “good” qualities for an invasive weed. But what’s so cool about Dyers Woad (besides it’s bitchin’ name)? Here’s what: allelopathy.

Allelopathy is the action of a plant blocking or limiting the growth of another plant via the production of some kind of inhibitor, usually a chemical. There are hundreds of examples of allelopathy in the plant world; allelopathic chemicals and mechanisms have evolved over and over again. Walnut, Red Maple, Broccoli, Mango and Eucalyptus all practice various forms of allelopathy. The fruit/seedpods of Dyers Woad contain a chemical that inhibits plant germination. The chemical is water soluble and is eventually washed away by rains. The Woad seeds remain dormant until this happens; in the meantime, the ground around the seed is kept clear of the seedlings of other plants. When the ground is finally “clean”, fast-growing, fast-seeding Woad rapidly takes hold. 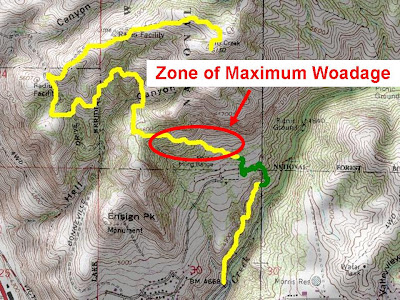 Interestingly, Dyers Woad seems fairly localized on the Wasatch; it’s abundant heading up and West out of City Creek Canyon, but I never see it along Shoreline between the zoo and City Creek. This may be because it’s (relatively) heavy seed pods don’t fall far from the bush: usually less than 2 feet, up to a maximum of 8 feet when aided by wind. For Woad to spread farther faster, help is needed, whether human, animal, or more specifically- my favorite suspect in the case of trailside expansion- canine.