Time to wrap up Weed Week, and I’ve saved the most evil, the most sinister, the most foul weed for last. I mentioned it a few weeks back, and though it’s not yet flowering, it’s already the fastest-growing forb throughout much of the foothills.

Imagine that you were an evil scientist, tasked with genetically engineering a Dandelion to be an even more dastardly weed. You’d probably go through 3 steps:

First, you’d add thistles all over, to the leaves and stems, so that neither critters nor livestock could eat it, and that gardeners couldn’t yank it out of the ground bare-handed. 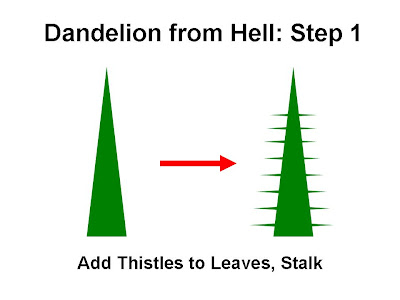 Next, you’d amp up the scale and structure of the plant: you’d add height, woody branching, and double (or better the number of flowers) 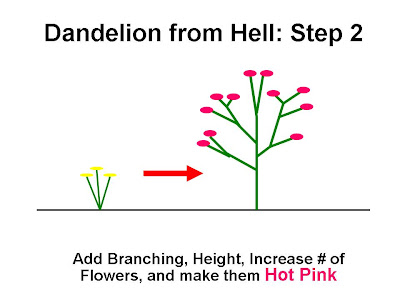 And third, while retaining the ray-flower-only structure of the composite flower, you’d dramatically increase the numbed of ray flowers- and hence seeds- per composite flower, and while doing so, you might as well make those flowers a real gaudy color, like hot pink.

NOTE 6/16/11: This post, written in the early days of the project when I was a Total Plant Rookie, contains a fairly big error: The flowers of C. nutans are disk-only, not ray-only. For some time I've meant to get around to updating the post and the "Step 3" graphic, and maybe/hopefully will at some point. The rest of the post and Dandelion - Musk Thistle comparisons are, to my knowledge, accurate. 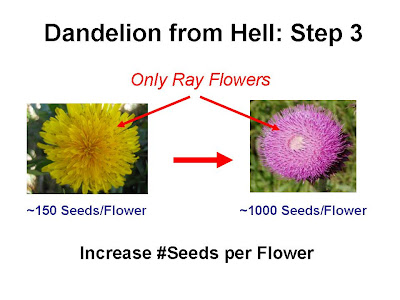 When you're done, you have a Dandelion from Hell. In the real world, it’s called the Musk Thistle, Carduus nutans. 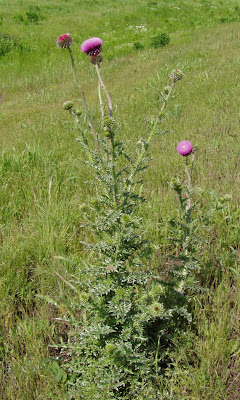 You can’t travel a foothill trail in the Wasatch without noticing Musk Thistle; it’s fast-growing, distinctive, and painful to brush against. Musk thistle is native to- where else??- yes, Asia, and has spread across over the last century or so. (Carduus is a genus of about 90 species of thistle, all native to the .) Like the Dandelion, the Musk Thistle features ray-only composite flowers, and is insect-pollinated (usually bees or moths) and generates wind-dispersed seeds. Musk Thistle seeds don’t disperse as well or as far via wind as Dandelion seeds, but it’s often introduced to new locales by animal or human dispersal. 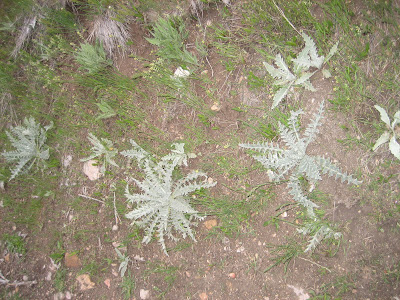 Musk Thistle is one of the first plants to start popping up after the snow melts and it thrives in a wide range of conditions- in , with as little at 10 inches of precipitation pear year, and in , with several times that. It’s now found in every state in the lower 48 except for , and .

The spread of Musk Thistle, even in the short time (13 years) I’ve lived in has been alarming. It’s common along- and in some cases pretty much lines- nearly every trail under 7,000 feet, and is frequently found higher. And over the years, as I’ve biked and hiked along Wasatch trails, I’ve notice a disturbing pattern: it’s most frequent along trails, which means that it’s most likely being spread by humans, and/or their dogs.

Tangent: When I lived in , I had a 600 foot long unpaved driveway that by mid-summer every year would be lined by 3-4 foot high Musk Thistles. Every summer, one Saturday- always too late, after they’d flowered- I’d dedicate an afternoon to digging them up. During these hot, scratchy afternoons I developed a deep-seated grudge against Carduus nutans.

When I visited the , one of the pleasant things I noticed was the complete absence of Musk Thistle. The ’s isolation has protected it this far.

Tangent: I notice this about 1/3 of the way up Desert Peak, and realized with a start that I hadn’t washed my boot soles before coming out there. It’s unlikely, but I hope dearly that I didn’t bring a seed along… 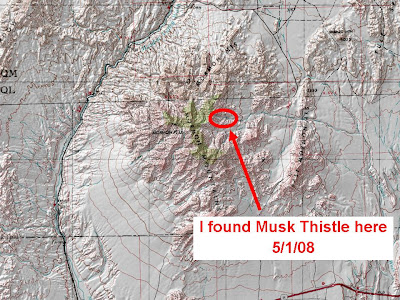 But amazingly, when I climbed the East slope of the , up the remote and rarely-visited (like if ever) South , I encountered several early-season Musk Thistles. In the lower part of the drainage were some older (year-plus) ATV tracks; I wonder if ATVers or hunters introduced the seeds. We generally think of the outdoors as a place where it’s OK to get our shoes dirty; maybe that kind of thinking needs to change… (and I won’t even get into the whole issue of dogs (not in this post anyway); taking up the subject of dogs with hikers is like taking up the LDS Church with Mormons, only not as reasonable…)

The scale, efficiency, adaptability and sheer voracity of Musk Thistle are impressive. But there’s something else impressive, though more subtle, about this plant: it appears to practice a form of reverse allelopathy. That is, when bits of Musk Thistle tissue are added to the soil, it actually fosters the germination and growth of new Musk Thistle seedlings. This seems to be at least part of the reason that it develops into such firmly-entrenched, impenetrable stands.

That’s it for weed week; fast-growing, invasive weeds are annoying and often harmful, but they’re generally successful for good reason, and understanding those reasons usually end up helping one see a little bit more of the Beauty of the World.

This’ll be the last post for a few days; tomorrow night I’m headed down South for a canyon-country backpack. I’ll be back mid-next week, and when I’ve caught up, I’ll zero in on Oak.