Another thing about the Twin Corral backpack worth mentioning is the weird physiogeography of deep canyon hikes. Early in the season, I talked about how each peak hike follows a similar 3-stage methodology. A like 3-stage methodology holds true for most canyon hikes, only in reverse. First is a traverse across high ground. Second is the descent through the middle layers, or “tiers” of the canyon system, and third is the travels and exploration along the canyon bottoms. But somehow the 3 stages of canyon hiking are clearer in reverse, as you exit the canyon, typically after a stay of a few days. 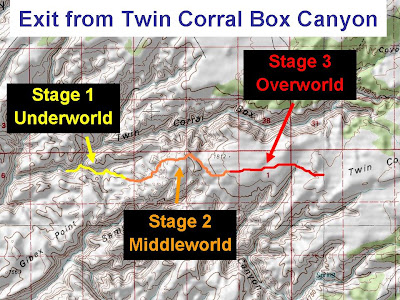 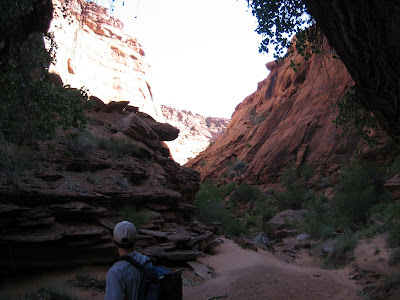 The first stage in this direction (up & out) is the hike and climb through the main canyon bottom- what I call the Underworld- and up and out a navigable side canyon. This is basically more of what you’ve been dayhiking the last few days- beautiful, with high walls and a small patch of sky overhead, easy navigation. 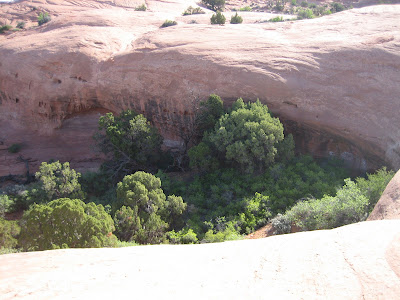 The second stage is the Middleworld. The Middleworld is a weird land of interconnected sandstone hills, ramps, cliffs and ledges interspersed with ravines and patches of brush and woodland. The Middleworld is far and away the most problematic stage navigationally- suddenly a ramp starts rolling steeper and turns to a wall, or a little valley winds its way into a dead end, or open out into a towering pour-off. For many of us, the Middleworld is the closest we come to navigating a maze in the natural world. 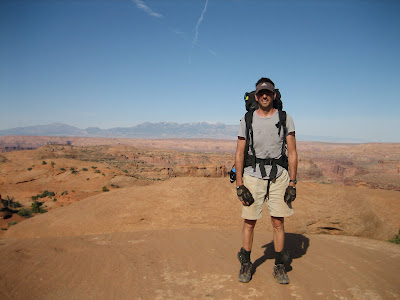 The third stage is the Overworld, the high plateau surrounding the canyon, over which you trudge back to your vehicle, (which hopefully will still be present, intact and operational.) And the shocking thing about the Overworld is the sky. So much sky, all around you. Too much sky, no protective canyon walls, and so much light. You tuck down your cap visor a bit, and focus on the ground ahead, but all that sky and light is both wonderful and un-nerving at the same time.

The Overworld on the East side of the Dirty Devil canyon system is dominated by 2 shrubs. First and most dominant is our old friend Blackbrush.

Tangent: I’ve learned something new about Blackbrush since blogging about it last month. In that post I mentioned that the right (ish) angles of the branching twigs is one of the easiest ways to identify Blackbrush. But it also appears that that right-angle branching may have a direct benefit: It creates pockets of internal, shifting, intermittent shade for leaves on the interior branches, shielding them at least part of the time from the full strength of the sun. 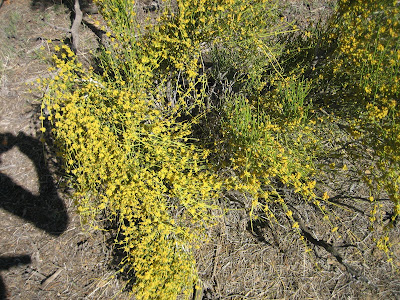 The second plant is fascinating because its so different from everything else around it: Mormon Tea, Ephedra viridis (Green Mormon Tea) or Ephedra nevadensis (Nevada Mormon Tea.) (The two species overlap and are tricky to tell apart.). Ephedra is a genus of several dozen species, around 10(?) of which are native to . What makes Ephedra so interesting is that it’s a Gnetophyte. The vast majority of Gymnosperms (non-flowering plants) with which we’re familiar are Conifers, like pines, firs, junipers, etc. But there are 3 other major orders of Gymnosperm which are completely separate and distinct from and only distantly related to Conifers.

The first is the Cycads, which we mentioned when we looked at Palm trees. The second is the enigmatic Gingko, a prehistorically common and varied order, which today exists only as a single species, the Gingko tree, believed to be extinct in the wild. 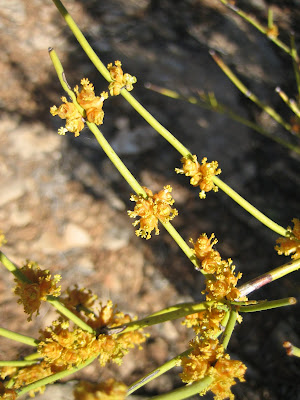 Gnetophytes are way ancient (200+ million years) have never been very numerous, but hang on in specialized niches. Ephedra is one of 3 families in the order (the other 2 are totally weirdsville). Ephedra bears no leaves, only stems, which are green, upright and fairly flexible, and it is within the stems that photosynthesis takes places. Ephedra is dioecious, and the male cones “bloom” in April and May like little flowers (which they are not.) Ephedra is what I call a “Wind-Agent” plant, meaning it is wind-pollinated, but its seeds dispersed by an external agent- usually small rodents who cache them underground. Ephedra also reproduces asexually, via root cloning, and often re-sprouts from the crown following fire.

Tangent: The type of Ephedra we find in the West- Mormon Tea- bears no measurable amounts of the much-publicized drug, “Ephedra”. The drug “Ephedra” comes from an Asian species. 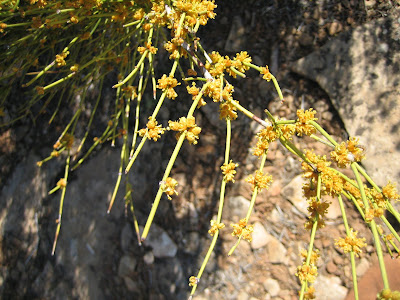 There are a couple of other interesting things about Ephedra. The first is that the form of the male cones is such that they direct wind currents to disperse its pollen away from itself- a more sophisticated dispersal schema than the undirected "pollen blast" of conifers. The other is that Ephedra is the only known non-Angiosperm to practice double fertilization, a sophisticated reproductive mechanism we'll look at when we talk about Oak.

Ephedra is cool in the desert because it’s so generically and evolutionarily distant from everything else around it. For hundreds of millions of years it’s followed its own lonely path, and here it is, thriving alongside Blackbrush and Bitterbrush and Sagebrush and Shadscale and all the rest of the pack of modern-day angiosperm shrubs.

The Overworld effect usually damps out on the long drive home, in the “safety” of your vehicle passenger compartment. But over the years, it’s strange how the Overworld effect has become one of my favorite and most savored parts of a multi-day canyon backpack.