Weed Week Part 1: Crabgrass, C4 Revisited, and Some Other Stuff

OK first off, I’m going out on a limb calling this “Weed Week”. I really only have 2 weeds I plan to talk about this week, and bunch of completely non-weed related stuff. And frankly, the 2 weeds I plan to talk about- Crabgrass and Musk Thistle- I don’t plan to cover in anywhere near as much detail as I did my favorite weed ever, Dandelions. And neither has a great, blow-you-away genetic-anomaly mystery or elusive native variant thing going on (although the Musk Thistle does have a cool sort of Evil Super Anti-Hero aspect to it.)

But I really like the idea of a “theme” for the week. It gives me a sense of going somewhere, or telling a bigger story, rather than just rambling about birds and plants and bikes… So anyway, here we go. 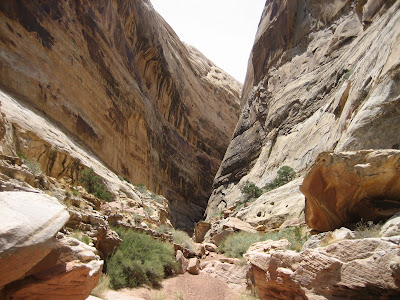 #1 Son and left my office Friday evening and drove down to the San Rafael Swell. The SR Swell is a big ovaloid uplifted area in . On the Eastern edge is a huge “fold” of the Earth’s crust which takes the form of an amazing, titled ~30+ mile long wall of rock, called the San Rafael Reef. The Reef is incised with dozens of slot canyons, which range from easy wide walks to tight twisty slots to technical canyoneering adventures. But most everybody refers to the San Rafael Reef as the San Rafael Swell, so when someone in Salt Lake says, “I’m going down to the Swell this weekend,” they generally mean that they’re going to the Reef. 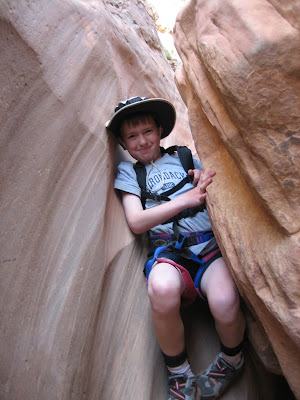 Because the Swell/Reef is so accessible, parts of it see human traffic at near national park levels. Little Wild Horse Canyon, an elegant, windy slot, is the worst of it- the parking lot is overfull by 9AM on a Spring weekend. But nearby there are still plenty of canyons with light or no traffic. 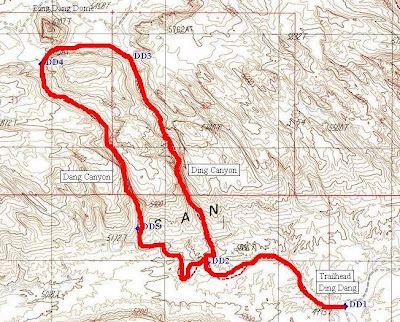 A great example is the hike we did Saturday- the Ding/Dang loop, which involves climbing , then descending . Ding is pretty easy, with a bit of scrambling. #1 and I hiked it 2 two years ago as an out & back. But with 2 years additional growth in his frame and legs, we practically raced up it compared to our pace of 2 years ago. The hike down was wonderful- technical enough to be a challenge, but not so hairy as to be problematic for a 1 adult/1 child combo. We used a harness and rope to lower #1 down three pitches, which was his second favorite part of the hike. The 1st favorite was holding the lizard caught by some boy scouts we ran into. 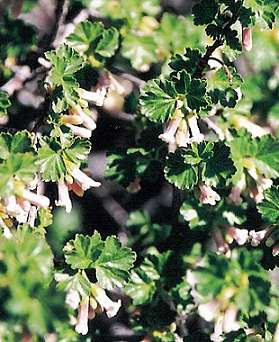 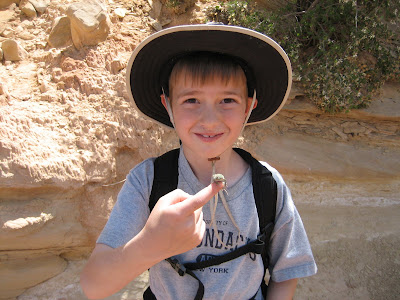 The vegetation was pretty much stuff I’d seen in my 2 previous desert jaunts, with the minor exception of the few pinons we encountered (on the backside of the Reef) were Colorado vs. Singleleaf, and a leafy shrub I’d never noticed before, Wax Currant, Ribes cereum. Ribes is genus of about 150 species that includes all the various “gooseberries” and “currants”. Wax Currant is low, shade-intolerant, deciduous shrub with small, vaguely maple-like leaves with 3 to 5 lobes. It often grows as ground cover in drier Western forests, but seemed to be doing great along the bottom of both Ding and Dang. In forest settings it forms a dense, low canopy that is often conducive for Douglas fir seedlings, which eventually shade it out.

But I’ve blogged plenty about desert plants so far this year (and I have yet another desert adventure coming up this weekend) so let’s get back closer to home. Like as in my yard, and the two-front battle I’ll be fighting over the next couple of weeks.

City has wonderful yards and gardens, planted with all sorts of wetter climate stuff, which unfortunately only thrive without irrigation for a few brief Spring weeks. All summer long, Utahns blast their lawns with water in a never-ending battle to make their lawns look like something out of or . And that’s one of the reasons why I love early May so much; the yard and everything in it- lawn, flowers, shrubs, trees- do great without any watering help. 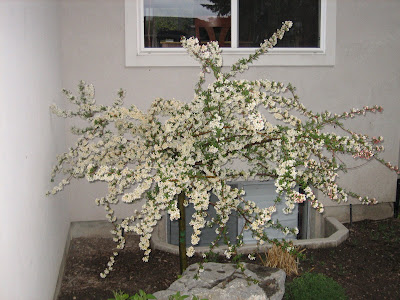 And right now, my yard looks, and smells, fabulous. Here are a few photos of Sand Cherry, Lilac and Apple blossoms. The Lilac scent is almost hypnotic right now- like the way women’s perfunes try to smell but never do. 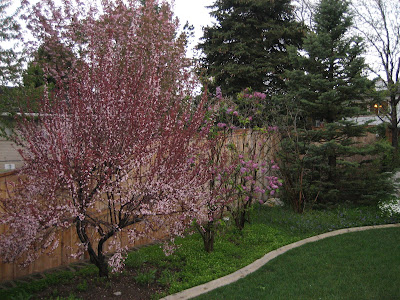 But the first front in my battle is this: when to turn on the sprinklers. This year I am determined to make it until June 1 before giving in. I will admit that this is a bit of a stretch; we’ve never made it so late before, and if I do “fall behind” so to speak, and allow brown patches to form prior to 6/1, I know I’ll face a tough struggle to green the lawn again before September. But it irks me that my suburban life, with its artificial water-table and manicured lawn and daily $4/gallon-of-gas commute is so out-of-whack with the surrounding natural environment, that I just want this one little victory over the tedium and servitude of the strangely miniaturized form of agriculture that is suburban yard care. 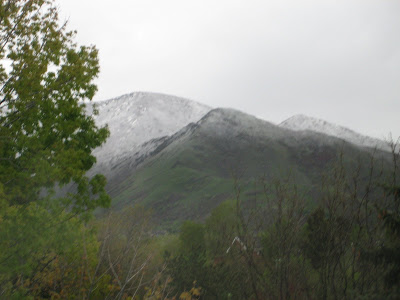 For the last several days, defeat has loomed; the bright green of the lawn is already dulling on high-traffic patches. But last night my side struck back: I was awakened at 3:45AM to the gentle patter of rain, which has lasted until the morning. It’s a classic May storm, gentle and soft, with a snowline down to 6,000 feet on the now-green hillsides. Lousy for mtn biking, but just beautiful to wake up to. I’m about 2 ½ weeks away from 6/1. Just 3 more days like this, separated by a few days each, and I just might make it. 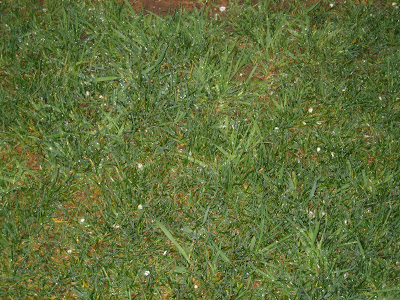 The other front in my battle with the yard is my ongoing, years-long struggle with a tiny patch of Crabgrass. There are over 300 species of Digitaria, the genus that includes all the Crabgrasses. (Digitaria is a monocot, and part of the Poaceae, or grass, family.) The one we’re most familiar with in is Digitaria sanguinalis, or Hairy Crabgrass. Crabgrass is native to Eurasia (as are practically all of the really nasty weeds in .) It thrives on disturbed ground, does better in dry and hot conditions than “normal” lawn grass, and way out-seeds it, germinating repeatedly throughout the growing season. 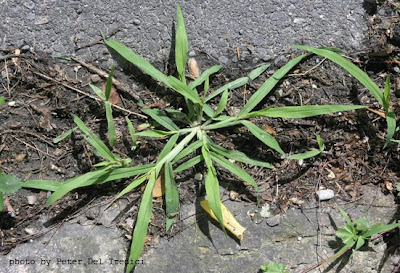 So Crabgrass is certainly evil, but why is it cool? Because of how it does better than lawn grass in dry and hot conditions; all Digitaria species use C4 photosynthesis, which we touched upon when we looked at Corn, in our introduction to Monocots. The genus Poa, on the other hand, which includes various species of , and most other stuff we plant in our lawns, uses traditional C3 photosynthesis.

C4 photosynthesis is employed by some 7,500 species of flowering plants worldwide, or roughly 3% of all angiosperms. Of those 4,500 species are are Poaceae (grasses) across several genera. There are 2 really fascinating things about the evolution of C4 photosynthesis.

First is that it now appears that C4 photosynthesis has evolved independently within Poaceae at least 8 separate times. And that's just grasses; across angiosperms as a whole, C4 photosynthesis has evolved separately at least 45 times. This makes C4 photosynthesis one of the foremost examples of convergent evolution (remember Hummingbirds and Hummingbird Moths?) in the whole living world. Crossing the evolutionary gap from C3 to C4 appears to be a very achievable and- under the right circumstances- likely evolutionary path for plants. The evolution to C4 involves no new enzymes; rather the C4 process simply leverages already-existing enzymes in the C3 system, utilizing them for the new mechanism.

Side Note: C4 photosynthesis has been highlighted by creationists as an example of "Intelligent Design". It's hard to think of a clearer, more textbook case of logical and convergent evolution, or a worse case for the creationists to highlight.

The second fascinating thing is that it appears that C4 photosynthesis didn't arise until during the last 30 million years, and that the likely reason has to do with the free oxygen levels in the Earth's atmosphere. One of the characteristics of the C4 process is that it's much more efficient under conditions of high oxygen, a condition that presents challenges for C3 plants. And with the ancient, ancient exception of the Carboniferous era (~300 million years ago), the Earth's free oxygen levels over the past 30-35 million years have been higher than at any time previously.

So, annoying as Crabgrass is, if your lawn is losing the battle to it, you can at least take consolation in the small part your lawn is playing in a ~30 million-year-long evolutionary epic.

Will We Be "Green Trash"?

As you drive around town, there are many lawns where not a speck of crabgrass is to be seen. Then there are lawns in which crabgrass has obviously won out, and the homeowner is now treating it as his “normal” grass. But in between are the “nice” lawns that have just a patch or two of crabgrass, where the battle can still be fought, and possibly won, and where the price of failure is the virtual consignment of your, your home and your family, by your more lawn-capable neighbors, to a sort of virtual “white trash” category of yard and home care, which I like to think of as “Green Trash”. 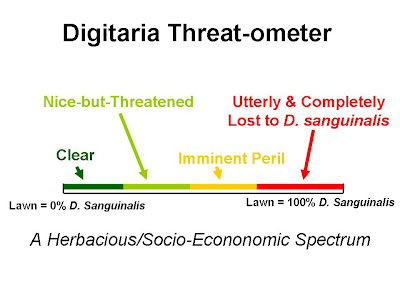 Tangent: I’m convinced that one could construct a virtual socio- economic map of any large metropolitan are by the percent composition of crabgrass in lawns. By the way, this “D-Meter”, with its ideal “Clear” state has the makings of a wonderful Scientology-related spoof, doesn’t it?

In my case, my lawn is in the “Nice-but-Threatened” category, which leads to my planned post-dinner activity this evening: lying on my belly for about an hour, plucking hunks of D. sanguinalis from my lawn, trying not to lose sight of the invasive strands, which after a bit becomes sort of like looking at one of those 3D hidden pictures…

Tangent: I just walked over to run an errand across the office park in which I work, and it occurred to me that while public parks are always overrun with crabgrass, there’s never a blade of the stuff to be found in an office park. There’s something wrong with our values when office park lawn care is a priority of park lawn care. Yeah, yeah I know- tragedy of the commons and all that supply-side horseshit. I don’t care. We should put playgrounds in office parks.