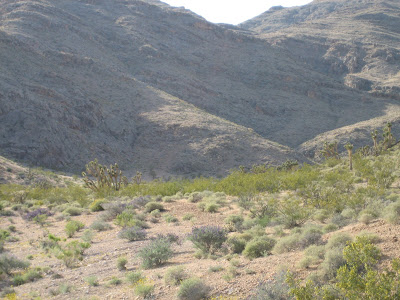 I love the smell and sight of Creosote on a road trip. It’s generally the sure sign that I’ve escaped the cold and reached the warmth. This isn’t always true, and reaching a Creosote-filled desert in the middle of July isn’t generally a thing to be happy about, but in the late Fall and early Spring it usually is.

Creosote, Larrea tridentata, dominates the 3 “hot” deserts- Mojave, Chihuahuan, Sonoran, in much the same way Sagebrush dominates the 1 “cold” desert- the Great Basin desert, only more so. While Sagebrush is absent from huge expanses of the Basin, it’s hard to avoid Creosote in the Mojave, unless you go up. It disappears on the flanks of mountains, but reliably reappears in the basin on the other side.

Around St. George, Hurricane and Virgin, UT, as you bike or drive about you often flirt with the boundary of the Mojave, and the presence or absence of Creosote is a clear indicator of whether you’re in or out of it. Once you leave St. George and head Southwest for Vegas, you’re in it for good.

Creosote is interesting to me because it’s like an alternate-universe Sagebrush, adapted to a hotter world. Like Sagebrush, it’s all over the place, and completely unpalatable to livestock, only more so. There’s only 2 known critters- a grasshopper and one of those “walking-stick” bugs- that can stomach the chemical in Creosote leaves. Like Sagebrush, Creosote has an enchanting signature smell, which is particularly pungent following a rain.

Tangent: I usually keep a sprig of Creosote on the car dashboard as an air “freshener” for several weeks following a Mojave road trip. When I enter the car the scent instantly transports me to someplace warm and dry…

Unlike Sagebrush, Creosote employs the resin-coated leaves-strategy vs. the hairy-leaves- strategy to avoid water loss. (Which probably makes sense, because in the “hot” deserts heat is probably the greater desiccator vs. wind in the . I don’t have data to back this assumption up, but I know the is colder, and it sure seems windier than the Mojave or Sonoran.) 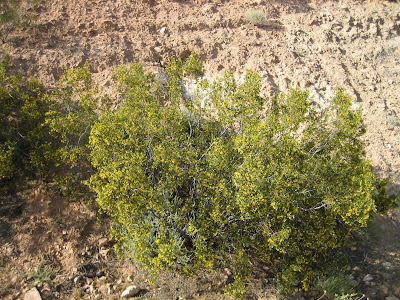 There are other, more subtle differences. The first is a different pollination strategy. Though both Creosote and Sagebrush disperse their seeds via wind, Creosote is pollinated by insects, namely- you guessed it- wild bees. (Man, I just love wild bees- they keep turning up everywhere!) And one of the most important of those wild bees is a monolectic bee- Trachusa larrea. This is the 2nd monolectic pollinator we’ve met this trip, and it’s worth noting that if you’re going to go the monolectic route and hedge all your bets on just one flower, Creosote sure seems like a safer bet than the (endangered and very rare) Bear Claw Poppy. I was particularly fortunate this past week in that the Creosote was in full bloom almost everywhere I went- only the 2nd time in a dozen years I’ve been able to time a Mojave trip so well. Wherever I went- St. George, Hurricane, Vegas, , the the desert flats were tinged with millions of tiny yellow blossoms, adding a welcome dash of color to the otherwise brown/olive/dull green of the Mojave basins.

The second important difference is that Creosote frequently reproduces by cloning via its root structure (which is different from stem-layering, which we've encountered a couple of times (and explained with the help of an equally lame graphic)) and this is one of the most fascinating things about this plant. Now cloning via roots isn’t all that amazing; lots of plants do it, including oaks and aspen. 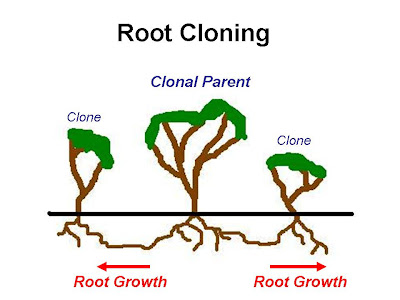 But what is particularly interesting about Creosote is that until around 12,000 – 15,000 years ago, Creosote was completely absent from the continental US. That’s right- all of those endless creosote-filled valleys you drive across on desert road trips, only 15,000 years ago, they were all filled with something completely different (probably Sagebrush.) That alone gives one pause, to think how much the world has changed in a timeframe only a little longer than human beings have been living in cities or practicing agriculture. But what’s even more amazing is that because Creosote clones expand in concentric circles that can effectively be dated, botanists have found ancient, continuous clones dating back almost 12,000 years, meaning that these clones, these organisms, are the actual original Creosote invaders at the end of the last Ice Age. 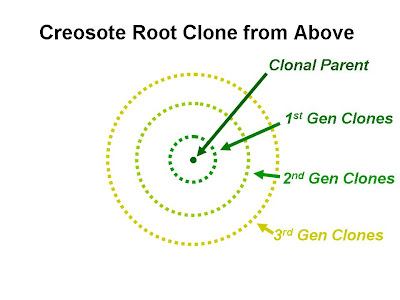 The most famous of these ancient clones, dated to 11,700 years ago, is the Victorville Clone, outside . I’ve also found a single reference to a possible 18,000 year-old clone outside If these clones can be considered a single, continuous living organism (still somewhat of a contentious issue), then these are some really, really old creatures- way older than the oldest Bristlecone pines. (Though not as old maybe as some clones, which we can talk about come summer…) 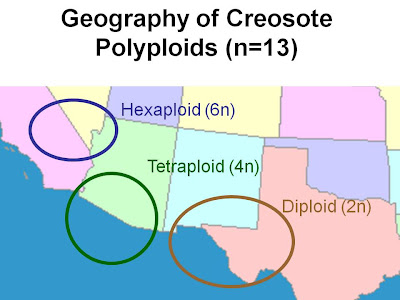 The third really cool contrast between Creosote and Sagebrush is in how and where it exhibits polyploidy. We’ve talked about the varying levels of polyploidy in different species and subspecies of Sagebrush, (and we also looked at polyploidy in Dandelions - seriously, how cool was that??) and Creosote also exhibits significant polyploidy, but what’s so interesting about polyploidy in Creosote is that it’s almost entirely geographic in occurrence. Everywhere I went last week, wherever I saw Creosote, and for that matter, clear across the Mojave- St. George, Vegas, , Victorville- every Creosote bush has 78 chromosomes. But if I caught a flight to or Tuscon, and stopped in a vacant lot by the airport to pick a sprig of Creosote, or headed out into the surrounding to do the same, every Creosote bush would have only 52 chromosomes. And if I took a plane to instead, and picked a sprig from the surrounding , every Creosote bush would have but 26 chromosomes. That’s right- all Chihuahuan Creosote is chromosomally diploid, all Sonoran Creosote is tetraploid, and all Mojave Creosote is hexaploid. The 3 varieties aren’t yet considered separate species, but they may well be on their way. 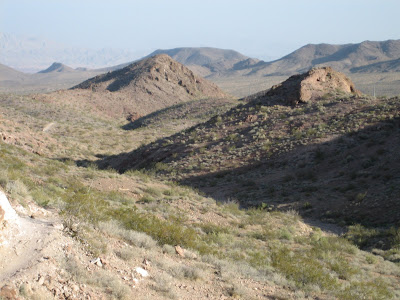 Alright already- enough shrubs! On to the Best Monocot Ever.