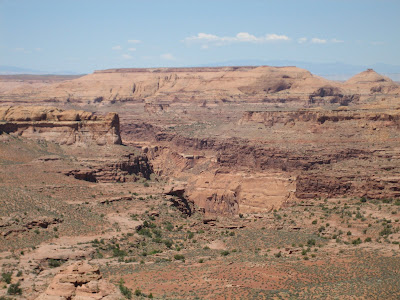 I’m back. We had a great trip, spending 3 nights in . Twin Corral is a side canyon off the Dirty Devil which we’d visited back in 2001. On that trip, we found a way out on the East side via a side canyon of Twin Corral, and on this trip we used that “way out” as a “way in”, descending into the canyon from the East, and then spending 2 days exploring various side canyons, nooks and slots. 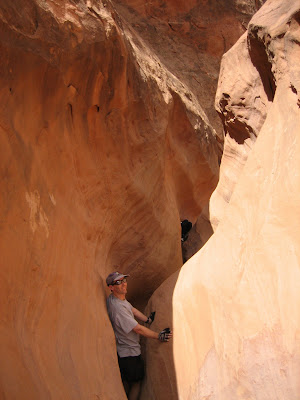 About a month ago, when I was going on about Little Creek Mountain, I mentioned how the place was so interesting that it deserved a blog of its own. I feel the same way about Twin Corral. This area- the various side canyons of the Dirty Devil- is an area we know well. Since 1999 we’ve done 7 trips to this area, and explored every canyon between Robber’s Roost and . They’re all wonderful, but Twin Corral is my favorite. It’s long, deep, seldom-visited and difficult to reach.

This isn’t a canyon country blog, but I’ll mention just a few of the amazing highlights of this canyon before zeroing in on a couple- one today, one tomorrow: 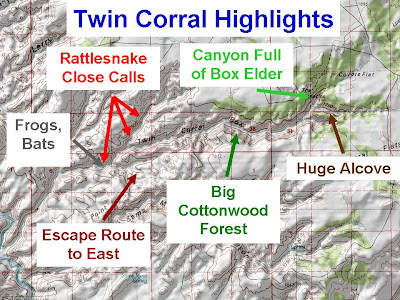 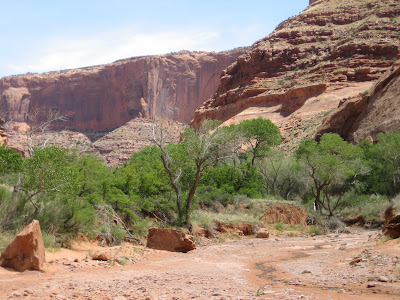 About 2/3 of the way up Twin Corral, is the biggest, lushest forest I’ve found in this whole area (pic right.) Monday, just as we did 7 years ago, we lay dozing on a sandy bench in the shade, getting gently snowed on by seeds.

Fremont Cottonwood, Populus fremonti, is common to pretty much every wet drainage below 6,000 feet in the greater drainage. Though often dismissed as a “junk” tree by yard snobs, the tree is much-loved by most every desert hiker. Its cool green shade, the deep rustle of its leaves in the wind and its frequent indication of nearby water make it an always-welcome sight. Cottonwood is what I call a “Wind-Wind” tree (Wind-pollinated, with wind-dispersed seeds) and it’s generally the only thing in most canyons that looks like a real, honest-to-goodness, leafy tree. 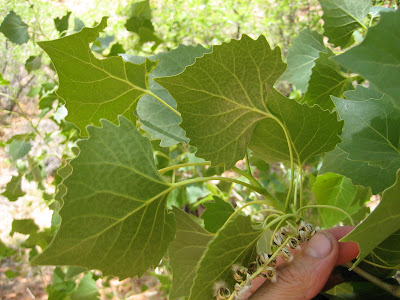 Tangent: If you listen to the rustle of Fremont Cottonwood leaves in the wind, and compare that sound with the rustle of Aspen leaves in the wind, you’ll notice that it’s the same sound, only the rustle is deeper-pitched. Cottonwoods and Aspens are closely related- both are Poplars (genus = Populus) and the leaf/stem architecture of each is extremely similar. The leaves of both are connected to the branches by stems that are very narrow side-to-side relative to the “height” of their cross section. This makes them prone to slide back and forth across each other, resulting in the distinctive rustle in even the slightest of breezes. But the Cottonwood leaves are roughly twice the size of the , so the sliding/rustling is of a much lower pitch.

Further up the canyon, way, way up, almost at the end, is a side canyon filled almost exclusively with Box Elder, the only such canyon I’ve ever come across (and one of the few times I’ve encountered this tree in the desert.)

At the very end of the canyon is the highest, deepest alcove I know of anywhere; a place always shaded and cool and damp. 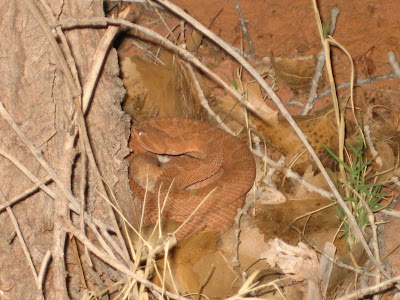 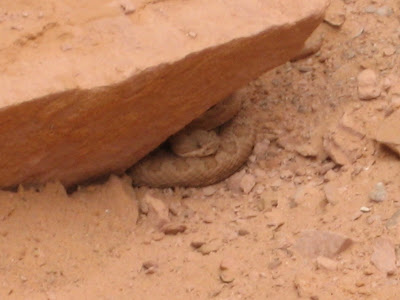 I don’t think I’ve ever been on a trip that’s been busier with rattlesnakes; I had 2 encounters that qualify as close calls- one snuggled in between my pack and a tree in the evening (pic left), and another warning me off from under a rock only 18” from where I’d stepped (pic right).

Strangely, bats appeared in the canyon shortly after the sun disappeared behind the walls, but well before real dusk, giving us a great opportunity to observe them flying and hunting in the light. They zipped and dipped and dove back and forth around us, close enough for us to hear the faint soft clicking of their wings flapping. This video is sketchy, but it gives you the idea…

The bottoms of these canyons almost always contain pools of water, and in the spring the water is teeming with life- frogs, tadpoles, and water bugs of all types: water bugs that scoot along the surface held up by teeny oil pads on the bottoms of their feet, big oval beetles that dive deep over and over again, and further up-canyon, strange critters that look just like little ½” pieces of broken-up twigs, till you realized that the have little legs and are crawling all over the place. (I have a great video of this- but took too long to upload, and honestly, it was kind of a sleeper...)

At night, the frogs begin their courting song- a loud ruckus that keeps you up the first night, and lullabies you to sleep by the third. Here’s a great night-video capturing both the calls, and the freaky throat expansion that produces it.

I’ve done a bunch of these trips, and they’re all great. But it’s unusual that I return to the exact same place after several- specifically 7- years. And I noticed 2 significant changes.

In 2001, at the junction of the main and the first major tributary on the North side, on the NE corner of the 3-way junction, there was a set of fantastic 4-8 foot high hoodoos, comprise of hard cap-rocks, 1- 3 feet across, atop columns of softer sediments. 7 years later, the hoodoos are gone, the cap-rocks lying on the ground. We think of geologic change happening slowly, but it can sometimes happen faster. 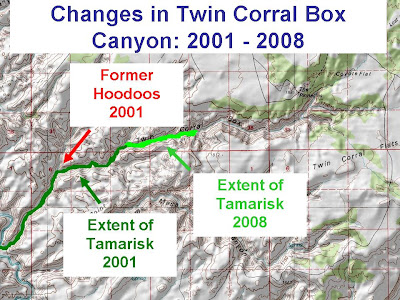 The second, more sinister change is worth mentioning because it’s an appropriate coda to Weed Week, and that’s Tamarisk, or specifically, the penetration up-canyon of Tamarisk.

Tamarisk (genus = Tamarix) is a group of a couple dozen species of brushy, feathery-leaved flowering shrubs native to the Middle East, Southeastern Europe and parts of South-Central Asia (I keep telling you, ALL the bad stuff comes from Asia). During the past ~180 years, several species have been introduced to , as ornamentals, windbreaks, or for erosion control. They’ve long since escaped cultivation, and today 8 or 9 (depending on who’s counting) species of Tamarisk range across the continental US. In the desert drainages of and , “Salt Cedar”, or Tamarix ramosissima, has run rampant, choking stream banks, and out-competing Cottonwoods and Willows. 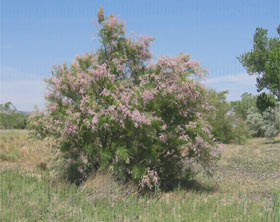 Tamarisk survives drought better than Cottonwoods or Willows. But on the other hand, it also survives inundation of its roots for longer periods than either of its canyon country competitors. And it blows them away when it comes to seed production: a mature Tamarisk produces 250 million wind-blown seeds per year, each of which can germinate within 24 hours of landing on wet sand.

Tamarisk has long lined all the major waterways of . And year by year, it creeps up side canyons, following water tables up-canyon. In 2001, we hiked up Twin Corral from the mouth of the canyon, on the , and I paid close attention to how far up Tamarisk penetrated. This year, when I returned, dropping in mid-canyon, and dayhiking both up and down-canyon, I also paid attention. Today, Tamarisk is common and thriving roughly 2 miles up-canyon from its up-canyon range limit in 2001.

The lesson for me in these changes is the perspective of intermediate time. We’re all used to short-term month-to-month changes. We’re also fairly accustomed to long-term decades long changes: we see an old college roommate after 20 years; we visit the house where we grew up in the 1970’s; we return to a island we visited on college spring break. But these longer-term changes are muted by fading memories. The perspective I had this week- 7 years- was long enough for significant change, yet short enough for memories and observations to be clear.