We’re now about ½ way through Spring, and right on schedule, we’re entering Stage 3 of the Morning Birdsong Cycle. This morning I was awakened at 4:20, and had to get up and close the window. I tossed and turned for another 45 minutes before getting up. 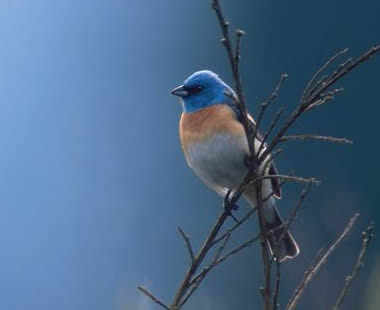 On the plus side, we’ve been getting wonderful birds at the feeders in our yard. Goldfinches, Dark-Eyed Juncos, Western Tanagers, Steller’s Jays, Scrub Jays, and for the last week we’ve had 3 male Lazuli Buntings, Passerina amoena, hanging around our yard.

The genus Passerina includes 7 species, all North American, and all “Buntings” or one sort or another. Passerina is one of the dozen or so genera in the Cardinalae family, which makes them fairly closely related to birds like Grosbeaks, Chats, and of course Cardinals. 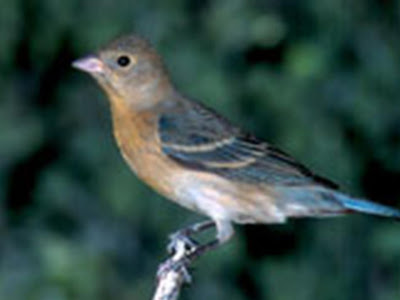 The Lazuli Buntings are probably the most striking visitors in our yard right now. Like so many songbirds the males are spectacular (above left) and the females (pic right) rather dully colored.

Tangent: This characteristic- showy males and dull-looking females- seems weirdly analogous to the sex chromosomes being ass-backwards in birds relative to mammals.

The male Lazulis are also the main singers, and each has his own song that he develops over the course of his first year out on his own. Elements of songs are mimicked or copied from neighboring males, and so each neighborhood develops a “theme” of related, similar songs. 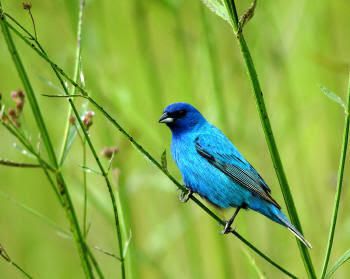 Lazuli Buntings are closely related to Indigo Buntings, Passerina cyanea, and occasionally hybridize with them.

Tangent: The Indigo Bunting winters in Central America but summers mainly all over the Eastern US, although it does makes its way to and as well. But never to ; too bad, because it’s a stunning bird. Coolest thing about them: they migrate at night.

Lazuli Buntings winter on the , then migrate North to the Western US to breed, arriving in right around May 1. In the Fall, the have a unique migration/molting pattern: they molt about halfway, then migrate to Southern Arizona and New Mexico right around the Mexican border, park it for a bit, finish the molt, and then continue on into Mexico. They’re the only bird known to do this type of two-stage molt/migration deal.

Tangent: When the birds roused me in the darkness, I woke with an unsettled feeling, as though I had forgotten to do something, or made a mistake long, long ago, and just couldn't quite recall what it was. It felt like a big mistake, I just couldn’t place it. Lying there trying to track it down as I lost the thread linking me to my dreams, I remembered the date, May 7.

I mentioned a few days ago that 20 years ago this time I was in the thick of a cross-country motorcycle trip. On May 7, 1988, we reached . I was born in , but my family moved to the Northeast when I was only a year old. For twenty-something years I whined my way through the long, bitter winters and hot, muggy summers of and , always dreaming of , and wondering why my parents had left. When I finally graduated college and started working, I finally had some money and could have flown out to . But for 2 years I waited, saving vacation, until I could travel out there via motorcycle. For years, I dreamed of returning to by motorcycle, and seeing the land of my birth that I couldn’t remember. On May 7, we woke up in to frost, and headed out Southwest. I have a vivid memory of us pausing at a traffic-less 3-way junction in Congress , and slowly circling our motorcycles once in the intersection before turning to the South towards I-8. There was a young girl on a bicycle about 100 feet away watching us. She must be about 30 now. 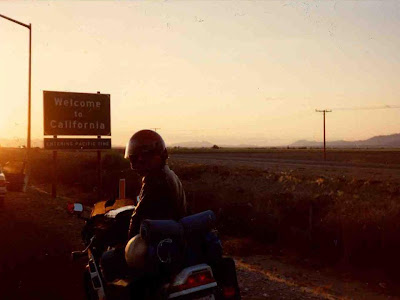 At sunset we reached the border and Blythe, where Jim, my companion, snapped this photo of me. To this day, it’s my favorite picture of myself.

I never really came home from that trip; I sometimes feel like I’m still on it. When I returned, I immediately started lobbying my then-girlfriend to move out West. 2 years later we eventually did, and that led to another stage of my life, and a whole other story. Eventually I ended up here. But it all started with that motorcycle trip 20 years ago.