A Brief Review of My Current Ailments

So 3 things before I begin today’s post. First, my Poison Ivy bout has cleared up nicely. It was really only problematic for about 3 days.

Second, I already had a good post idea kicking around for today about a couple of new interesting wildflowers popping out along the foothills. But I’m postponing that post in favor of something more real-time and self-absorbed.

Third, I hemmed and hawed a bit about whether to do this post. I just finished whining about my run-in with Poison Ivy in , and now I’m about to go off on two other health-related problems, only one of which is related to the whole point of this blog anyway. And worst of all, whining about one’s various health problems is like the classic ultimate stereotype of old-person complaining.

But since this is my blog, it is arguably is an appropriate place for me to complain a bit, and there is in fact an interesting botanical aspect to the 2nd injury. And to spice things up a bit, I’ve included a fine RLHG (Really Lame Home Graphic) and a video to boot.

So Wednesday night after work I was “fighting” with my 3 kids in the back yard (actually they were already out back playing, and I was crawling around on my hands and knees, doing search-and-destroy again on D. sanguinalis, when they lured/challenged me into “combat.)” Our “fighting” is a sort of play-fighting/wrestling that we started roughly 3 or 4 years ago, when all 3 kids were much smaller, lighter, weaker and less coordinated. I’ve known for some time that I really ought to scale back the intensity of the “fighting” (or at least not “fight” 3-on-1) before someone gets hurt.

Wednesday night, that someone was me. While I was occupied with my twins, my 8 year-old (whom I’ve previously profiled both as canyoneer and peanutbutter-dispersal-agent) rammed me from behind and the side, impacting my left side with his elbow (or knee- still not sure.) 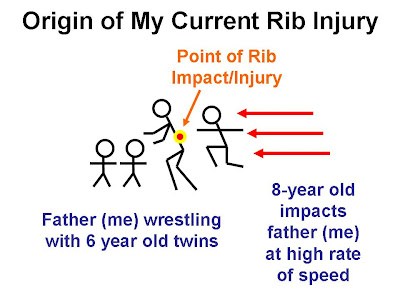 The result is my currently bruised rib. I’ve suffered bruised ribs at least 4 times previously, and in fairness this is probably the mildest case I’ve experienced, but it’s still painful to twist, lift or breather deeply. And I know from experience that there’s no cure but time. The good news is that doing the things I like- biking, running, getting it on with my wife- won’t cause further damage; I just have to endure the pain.

So I went to bed, annoyed with myself for allowing such a stupid injury to occur, and woke up… way… short… of… breath…

I’m probably a borderline asthmatic. Both my siblings are full-on, lifelong asthmatics, as is my 6-year old son. My own encounters with asthma are rare, but nearly every year I’ll have a 2 or 3-day long bout with it in May or June. I’ve always assumed it’s tied to something pollinating (call me Sherlock) but I never knew what. Now I think I have the culprit: Austrian Pine, Pinus negra. 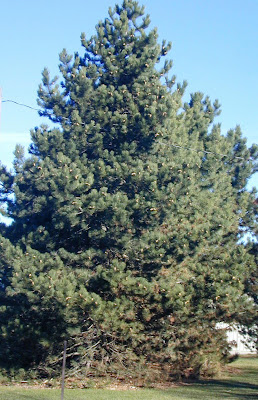 Austrian Pine (also known at European Black Pine) is one of the 2 most common native pines in (the other being Scots Pine, Pinus sylvestris). It grows clear across the continent, divided into 2 subspecies, each of which is further sub-divided into several varieties. The 2 major subspecies are divided roughly along a North-South line somewhere around the Austrian-Swiss border, and an East-West line across . 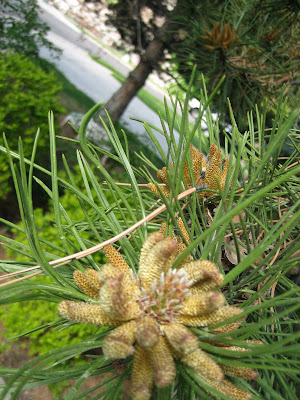 . nigra is sun-tolerant, shade-intolerant, and is a hard pine, with needles bundled in groups of 2. (For some basic background info on pines, see this post.) It’s monoecious, with trees bearing male and female cones.

So why is this Euro-pine relevant to us here in ? Because the vast majority (like practically all) of the actual pines (I mean real pines, not firs or spruces) that you see in parks, office parks or people’s yards in Salt Lake City- or for that matter in pretty much any US city- are either Austrian or Scots Pines.

Side note: This is easy to verify for yourself in . Check out any real pine in a yard or office park, and you’ll notice it’s needles are practically always bundled in groups of 2. Utah has only 2 native pines with needles bundled in 2’s- Colorado Piñon, Pinus edulis, and Lodgepole Pine, Pinus contorta; neither look at all like your office park/yard in-town pines…

The reasons: They look “nice”, European settlers were used to them and planted them from early on (similar to English Oak, Quercus robur) and they tend to do well in settled/suburban/gentle-urban environments. Also, the sun –tolerance of P. nigra is a real plus in new, shade-less office/exurb developments, and it exhibits great resistance to or tolerance of pollution, snow, ice and salt spray. (In , large amounts of salt are used for road de-icing during the Winter months.) Most of the Austrian Pine planted in the is from original sources in , and is therefore of the Eastern-European subspecies, Pinus nigra nigra.

So all of the pines we see driving around town here in the are non-natives. And in fact it’s pretty darn hard to see a native pine within 50 miles of . Despite the plethora of firs, spruces and Douglas Firs in the Wasatch, actual pines are quite rare around here, an anomaly I’ll explore in a future post, as the high country melts out and opens up…

When I complained of my shortness of breath Thursday morning, my wife pointed out a pollen-ringed rain puddle on the cover of our hot tub in the back yard, and poking around later that day, the culprit was obvious; the Austrian Pines separating my yard from my neighbor’s are practically “snowing” pollen. And here, to illustrate just how much pollen is bursting out of the males cones right now, is this video, the making of which involved my scaling a step-ladder, while holding my holding my breath for extended periods.

This really drives home for me the sheer numbers aspect of wind-pollination. I’ve worked almost my entire adult life in sales or sales management, and in sales we often talk about the “Funnel Model” which is fancy-sounding way of saying that in sales, no matter what you’re selling, you have to kiss a lot of frogs before you find a prince. Wind-pollinators, such as the Austrian Pine in my yard, are the ultimate cold-calling salesmen; they blast millions of pollen grains out randomly, in hopes that some teensy number will find their way- against all probability- to land on a female cone of the same species tree. It seems impossible- if an engineer told you he was designing such a randomized system, you’d never believe it would work- yet the world is filled with pines and oaks and willows and maples. That’s what I love about wind-pollination; it’s something completely impossible that happens all around us all the time. Now if only I could catch my damn breath.