Tangent: Can I begin a post with a tangent? Anywho, it’s June already. Spring is racing by, and there’s so much I’ve wanted to blog about in the last few weeks that I haven’t been able to- birds, flowers, leaves, weather, mammals. So much happens this time of year in such a short time. Already the foothills below 6,000 feet around the valley are starting to turn brown; the blast of green is just so short. But higher up- around and Kimball Junction and Pinebrook, the green blast is just beginning and the trails are opening up…

Update/Correction: One last note before leaving May behind: I was way wrong, way wrong about the extent of Dyers Woad in the foothills. It’s all over the place, especially behind the U. Hospital, along Shoreline trail, and in the lower part of . 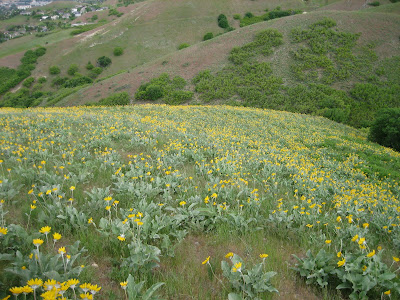 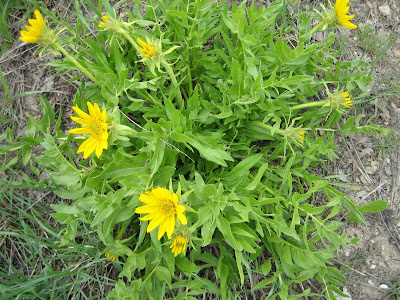 Today my friend Cory and I biked out to Morgan and back, 40 miles each way. We noticed that East of Little Mountain Pass, the Balsamroot flowers looks the same, but the leaves are different. Instead of each leaf-stalk ending in a single large, arrowhead-shaped leaf. Each leaf stalk has a dozen-plus pointy leaves jutting out perpendicular to the stalks. This plant is Cutleaf Balsamroot, Balsamorhiza macrophylla (pic right). East of Little Mountain Pass, and again after , clear out to Morgan, Cutleaf Balsamroot dominates. Yesterday I mtn biked up around the Glenwild trails North of Kimball junction, and Cutleaf and Arrowleaf were both plentiful, side-by-side. 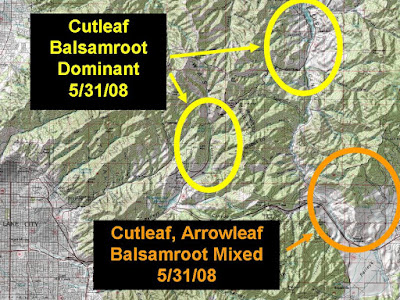 There are 10 species of Balsamorhiza in the Western US, 2 of which extend in Southern Canada and 1 of which reaches down into . All have the same big sunflowerish heads, but the leaves are quite different. Different Balsamorhiza species hybridize easily. 3 of the 10 species occur here in : Arrowleaf, Cutleaf, and (the as-of-yet-not-spotted-by-me) Hooker Balsamroot, Balsamorhiza hookeri. 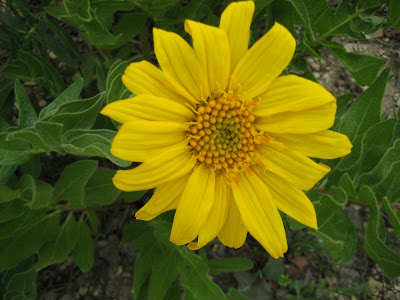 In my poking around the foothills over the last several days, it seems that Arrowleaf dominates in the driest, sunniest, most exposed sites, and that Cutleaf (closeup pic right) does a little better higher up, where it’s just a touch cooler and wetter

But there’s something else interesting about Cutleaf, besides being just-another-Balsamroot. Within the Baslamorhiza genus, it appears to be somewhat of an anomaly in two ways. First is structure. Balsamroots are divided by botanists into 2 sections: 6 of the 10 species have “pinnately divided”, or feather-like leaves and a slender, un-branched taproot. 3 of the remaining species have “simple” leaves, and a thicker taproot that branches into multiple crowns above. (This second section includes Arrowleaf Balsamroot.) But Cutleaf has the pinnately-divided leaves of the first section, with the thick branching taproot of the second section. 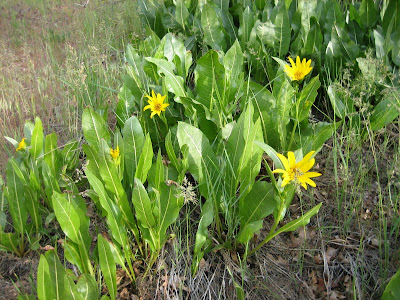 There are seven species of Wyethia, all native to . The common Wyethia in is Mule’s Ear, Wyethia amplexicaulis, (pic left) which I described when introducing Arrowleaf Balsamroot as the flower most often mistaken for it. It’s now beginning to bloom in force, and on the map below I’ve marked a couple of spots along the Shoreline trail where it dominates over Arrowleaf Balsamroot. 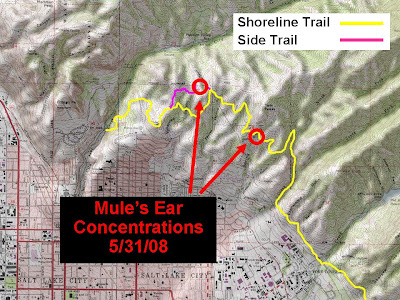 Tangent: Back when I first described Mule’s Ear, I highlighted the smooth leaves as the easiest way to distinguish it from Arrowleaf Balsamroot. Though this distinction is valid in , it breaks down further afield. Arizona Mule’s Ear, Wyethia arizonica, for example has very hairy leaves and stems. Where W. amplexicaulis and W. arizonica meet ( for example) they frequently hybridize. The hybrid is known as Wyethia x magna, and W. x magna can have very hairy, slightly hairy, or completely smooth leaves. Net-net: Mule’s Ear identification is easy up around , but gets hairy (pun intended) down South.

Nested Tangent: W. x magna occurs clear down in , even though W. amplexicaulis hasn’t grown in since the Pleistocene (>10,000 years ago.) in this sense, W. x magna in is a living relic of past flora. We’ll see this kind of living relic again soon when we look at hybrid Oaks here in . 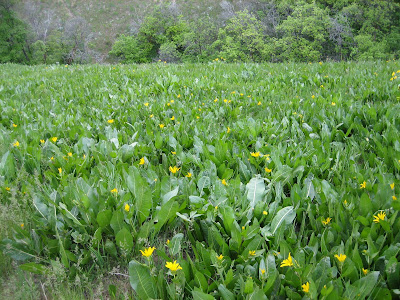 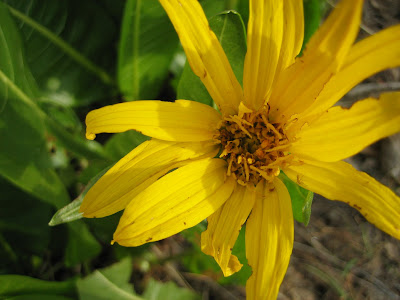 Mule’s Ear (closeup pic right) seems to do better with a little more shade and water than Balsamroot, and it grows best in clay soils. Though they look similar, Arrowleaf Balsamroot is a favored food of domestic sheep, Bighorn Sheep and Mule Deer, but all of these animals avoid Mule’s Ear. As a result, Mule’s Ear often thrives, and out-competes other native ground cover, in areas that are heavily grazed or foraged (pic left). Like Balsamroot, Mule’s Ear is pollinated primarily by Osmia bees (who I suspect like many of us can’t tell the flowers apart!) 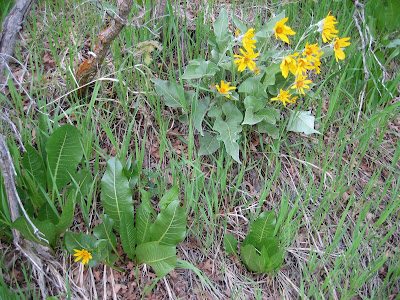 Wyethia and Balsamorhiza are closely related (both pictured side-by-side, right). Both are distinguished within their larger tribe, Heliantheae, within the Sunflower family, (a "tribe" is basically a grouping within a biological family that includes multiple genera...) by having pistillate ray flowers, which means that the ray flowers of each are sexually functional. All other genera within Heliantheae have sterile ray flowers (but sexually functional disk flowers.) (See this earlier post for a brief review of composite flower structure, and the definition of ray and disk flowers.) Like 9 out of 10 Balsamorhiza species, all Wyethia species are diploids with 38 chromosomes.

For example, my Dad has 2 brothers: John and Peter. If we got together for a barbecue that included Uncle John, his kids and grandkids, together with my Dad, his kids and grandkids, but left out Uncle Peter and his clan, our grouping would be paraphyletic. For our barbecue to be monophyletic, we’d have to invite Uncle Peter and his descendants along as well. 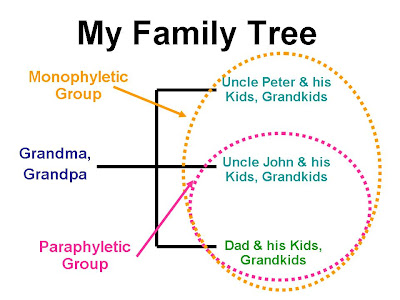 For Wyethia to be monophyletic, it would have to include Balsamorhiza. 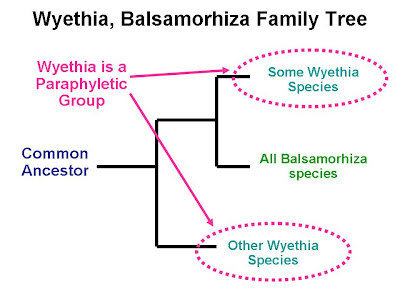 And this highlights one of the big problems of traditional biological taxonomy: as modern DNA analysis reveals the ancestry of and relationships between living things, the traditional taxonomies- in this case genera- don’t always hold up. From time-to-time botanists address this problem by reclassifying a plant or group of plants (a recent example was moving Yuccas out of the Lily family and into the Asparagus family) but this results in various sources (textbooks, etc.) with conflicting information.

Bottom line: those simple, uniform-looking yellow flowers you see all over the place right now are pretty darn complicated, and they have some interesting stories to tell.

Excellent photos of balsam root vs. mule ear, esp. side by side. I'm coming from many years in NW WA, now in N. Central ID, and am slowing getting to learn the native flora. This includes collecting seed and trying to grow them on to landscape my place.

Just collected some BR seed late this evening and came across your site. More later...

Aristata- glad you liked the photos. Northern ID is one of my favorite places- lucky you! Good luck with the landscape- sounds like a great project.

Yes, my handle, aristata, is an epitaph from the pine species! I've met others who have associated it with other genera, but when first asked for a user name, ~18 years ago, I wanted something botanical and looked out over my yard until my eyes fell upon a P. aristata, one of the young plants in my dwarf conifer collection. Aristata. Sounds so aristocratic -- of course, that's me! Little did I know the botanical meaning at the time. I will say it's an uncommon handle since it's only been refused once in the past 15 years as I've registered for one thing or another online.

Speaking of which, I read with interest your account of the foxtail (bristlecone) pines. I've only seen one species of the group, P. longaeva, and made a special trip to see them based on the stories from a roommate who had once worked as a Parks Service employee -- at Great Basin National Park. If you've been there, I'd love to read about your experiences. I remember driving from the desert basin up the side of the mountain , Wheeler Peak, el. 13,000' +, and passing through one vegetative zone after another. It was so exciting to see the familiar species as well as the strangers on the way up. At the time there was only one puny little spot to pull over, which I missed. Complaint #1.

I set-up camp at 10,000' in the developed campground and set out to hike up to the pines another 800' or so to see the bristlecones. I believe the rock was all granite, or perhaps gneiss, very pretty, and I had that special feeling of wilderness, being in a extraordinary natural setting among the pines, when Complaint #2 hit me: altitude sickness. I went to sit on a large rock and nearly kept going down and fell on the ground, but caught myself in time.

Regrettable, I headed back and, still feeling a bit ill, while starting dinner was hit by Complaint #3: the wind, the ferocious wind! The mountain gets it, the little town at the base of the mt. gets it -- all due to the chilled lofty heights of the Peak and the warm desert air at its base, but you could explain this better than I.

End of aristata story, but despite the complaints, Great Basin Ntl Park is one place I want to revisit.

Aristata- yes I just recently visited (again) Great Basin NP- I'm a huge fan of the place! I blogged about our most recent visit here: http://watchingtheworldwakeup.blogspot.com/2008/08/hydrology-road-trip-part-2-into-heart.html under "Basin #3", and referenced an earlier trip here: http://watchingtheworldwakeup.blogspot.com/2008/08/august-and-everything-after.html

I sympathize with your complaints. Best advice for altitude: drink lots of liquids, early and often. For wind, either sleep in the back of a pickup/SUV/station wagon, or if it's cold enough, sleep outside and zip the bag over your head. I avoid tents- they're just too loud in the wind. I've also had success in high winds sleeping under a rock overhang, or with my head sheltered by a large tree- again always without a tent.