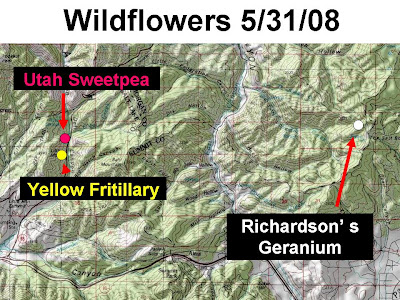 Some catch-up on wildflowers today. I’ve resigned myself to never being able to blog about all of them I come across, but I’ll highlight 3 today I’ve come across over the last week in the Wasatch between 6,000 and 8,000 feet. 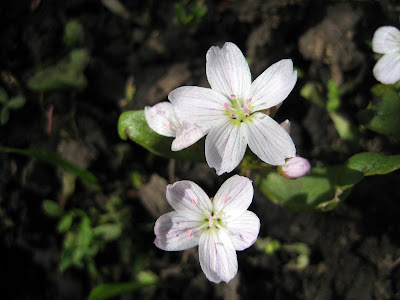 This guy (pic right) is ’s Geranium, Geranium richardsonii. (OK this has to be the easiest name in all of botany.) It’s the most common wild geranium in the West, occurring from way up in the down into Northern Mexico, but never further East than . There are over 400 species of Geranium in the world, over 40 of which grow wild in , but of those 40 only around half are native. 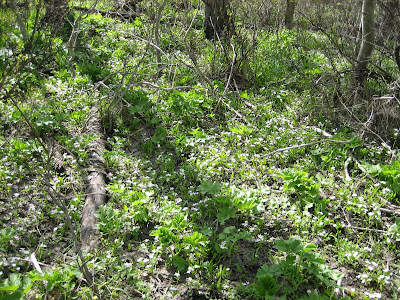 Geraniums are shade tolerant, and typically grow on forest floors, such as in an forest, which is where I found these (pic left). They reproduce either by seed- and are pollinated by bees and flower beetles- or asexually by root-cloning, like Gambel Oak or Creosote. 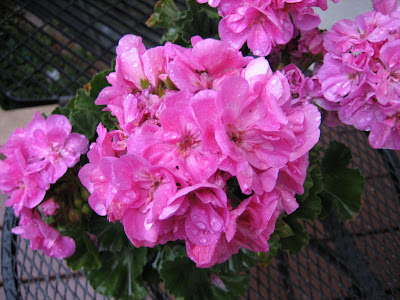 Tangent: You know all those plants that people grow in their gardens called “geraniums”? (pic right, from my back deck) They’re not Geranium species. They’re all various species of a related genus called Pelargonium. The vast majority of cultivated garden “geraniums” are derived from one of a dozen or species of Pelargonium, all of which are native to Africa, and all but one of which are native specifically to South Africa. 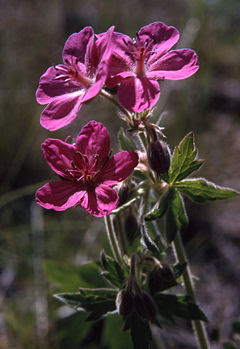 The wild geranium I haven’t yet come across, but am keeping an eye out for, is the Sticky Geranium, Geranium viscosissum, (pic left) which is most common in the Northwest, but supposedly makes it down into . What’s interesting about this guy is there’s some preliminary evidence that seems to indicate it’s paracarnivorous, which means that while not directly carnivorous- like a Venus Flytrap- it’s able to break down and possibly benefit from animal proteins. The trichomes, or little surface hairs on the stems/leaves of Sticky Geranium have protease enzymes on them, which are the type of enzymes that break down protein molecules. The idea is that the Sticky Geranium might be able to metabolize nutrients from surface microbes or teeny bugs that wind up stuck/dead on its leaves/stems.

Tangent: Some botanists use the term protocarnivorous, because it’s thought that maybe behaviors and processes like this are how true carnivorous plants evolved, but the term is technically a stretch, because it implies a direction in evolution toward carnivory (yes that’s a word) when it’s not clear that’s the case. In fact, there are a number of examples of plants that appear to have had carnivorous behavior in their evolutionary past, but are today non-carnivorous. 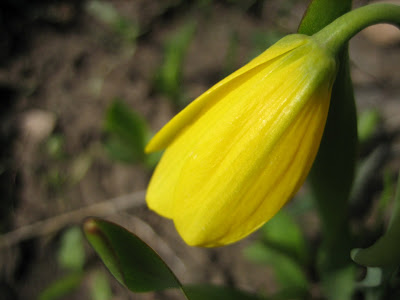 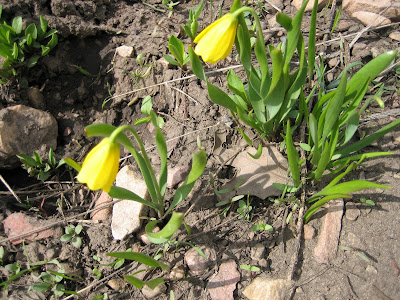 Yellow Fritillary, Fritallaria pudica, also called Yellowbell, are easy to identity, and always hang upside down. Like ’s Geranium, they grow all over the West. They bear a resemblance to Glacier Lilies, and like Glacier Lilies are short-lived, pop up soon after snow-melt, and do well in open woodlands. They’re also members of the Lily family, Liliaceae, and therefore are also monocots. And- also like Glacier Lilies- they have an edible corm, or bulb, growing 3-6” below ground. 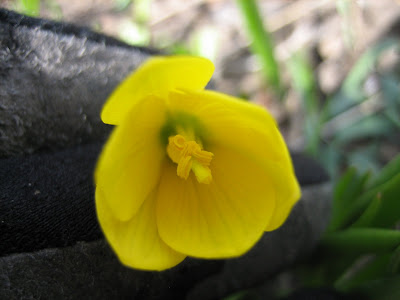 There are around 100 Fritallia species across the Northern hemisphere. They reproduce either by seed, or asexually via bulbets, (Yes, yet another mechanism by which plants can reproduce solo...) which are basically smaller bulbs that grow off the main bulb. 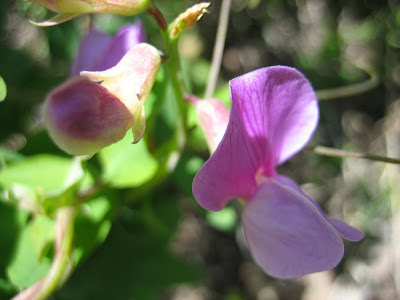 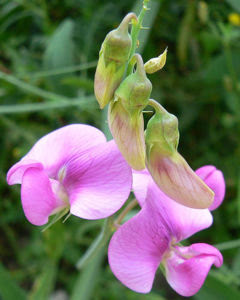 here are 160 species of Lathyrus, all “sweetpeas” or “vetchlings”, 30 of which are native to . Sweet peas do produce pea-like seeds, but they contain a poisonous neurotoxin. (So like, don’t eat them. There’s actually a name for the sickness- sweat pea lathyrism- you get when you do eat them, so apparently this must happen with some regularity.) 2 European sweetpeas, Lathyrus odoratus and Lathyrus latifolius, have been cultivated for centuries and have played an important role in the foundations of modern genetics. I’ve included a photo of L. latifolius (pic right) so you can see how similar it appears to L. paucifloris.

You probably never heard of Reginald Punnett, but he’s one of the guys who continued Gregor Mendel’s work. He developed this chart, the , which you may have seen back in biology class, and is used to predict the probability of different inherited traits. 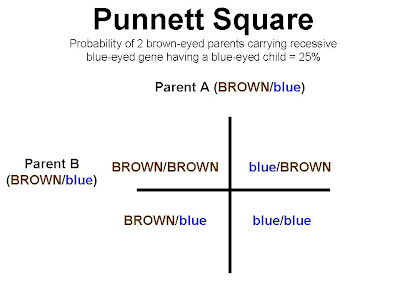 He did most of his work with sweetpeas. His classic experiment was producing a blue-flowered sweatpea from 2 white-flowered parents, showing that each carried the recessive blue gene, similar to how 2 brown-eyed human parents can produce a blue-eyed offspring. 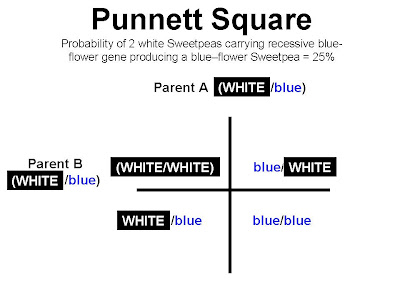 Sweetpeas have been bred and cultivated into almost every color, but never yellow. A yellow sweetpea appears to be an impossibility; no Lathyrus species carries genes for yellow pigment. And in this respect, they’re a wonderful converse analog to the long-sought blue rose. 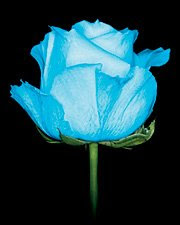 For centuries gardeners have attempted to breed a true blue rose, without successs. (The few you see are simply dyed.) But roses carry no genes for blue pigment, and both sweetpeas and roses are interesting examples of the limits of cultivation; gardeners can come up with amazing flowers, but they’re ultimately constrained by the set of genes they have to work with. (For a cool, geeky sysnopsis on recent attempts to genetically engineer a blue rose, check out this article.)

mmmmm.....if you interested i found a site that sells all types of plants,seeds etc...including a blue rose, i quote,"Rose,
Blue Girl
Item # 4792 Rosa

Such an incredible silvery lavender-blue rose, it seems unreal! Created by Germany's foremost hybridizer, Blue Girl Rose is a unique hybrid tea that is a rare treat for the connoisseur. Yet, its no mere novelty, this vigorous plant blooms freely with huge 5 1/2 inch flowers of exhibition form. The Blue Girl Rose has long; strong stems make it ideal for eye-catching flower arrangements."
http://www.directgardening.com/detail.asp?pid=4792

You should check it out!!