Succession in the Foothills, and What Is With All The Rain?

This has been the wettest Spring in the Wasatch I can remember. On the bright side, with a 2-day long exception a couple of weeks ago, the sprinklers are still off, which is a record for us in this house, and the yard is still green and lush. Soon enough it’ll be hot and dry, and then I’ll leave the foothills behind to bike and hike up in the Aspen and Fir, but right now it’s 48F and drizzly. So it’s a good time to catch up on something I wanted to cover before we look at more trees: Succession.

Tangent: This is as good a time as any for my standard rant about rain in . People are always going on about how is a desert, usually in some eco-pretentious (though admittedly correct) tone about how we need to conserve water, tread softly on the land, yada yada… That may well be true, but with the exception of several weeks in the summer, it seems like I am always getting rained on. Steve and I have done 11 Southern Utah backpacking trips over the past decade (8 Dirty Devil area, 1 Escalante, 1 Paria, 1 West Desert) and with the exception of this last one we have been rained or snowed on every single trip. The day of our wedding, June 13, 1998, it rained all day. The day our first son was born, June 6, 1999, it rained on and off all day. This past Memorial Day, it rained all day. Wednesday and most of Thursday this week it rained all day. Seriously, this is a lot of rain. Why isn’t this place greener??

Succession in forestry terms is the process of how a forest or woodland changes over time, and specifically which species success which, and how and when they do so. Over the past century and a half in the West human impacts- logging, chaining, fire suppression- have probably changed the make-up of forests more than anything else, but, but there are natural processes of succession going on all the time in the forests around us. 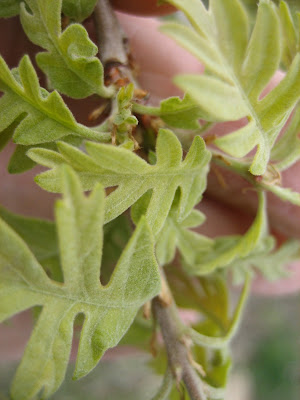 Way back in the very first post I mentioned that the Wasatch foothills are dominated by only 3 trees, and realistically, only 2 of those 3- Gambel Oak and Bigtooth Maple- comprise probably 99% of foothill woodland or chaparral. (The third hanger-on, Mountain Mahogany, we’ll look at soon.) And what’s interesting about this is that in so much of the West, the forest or woodland is dominated by just 2 or 3 species. Here in the foothills it’s Oak and Maple; up a little higher around 7,000-8,000 feet it’s almost always some combination of , Douglas Fir and White Fir. In Porter Fork, it’s Douglas Fir and White Fir. Throughout so much of the Southern part of the state or the , it’s Pinon and Juniper. Down in on the Paunsagunt Plateau there’s a wonderful area around 7,500 – 8,000 feet dominated by a mixed and Limber Pine. Where I used to live and mtn bike in , in the foothills West of Denver, it was Ponderosa and Lodgepole Pine.

This 2 or 3 tree-type forest is a big contrast to where I grew up in the Northeast, where forests always seemed to be a confusing jumble of different species, and it makes it easier to pay attention to succession. In every one of the forests types I rattled off above, some type of ongoing successional change is occurring. 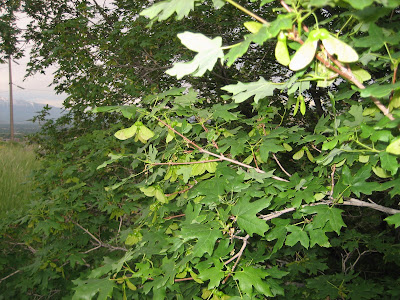 In the Wasatch Foothills, 2 big changes are occurring. The first is man-made. Suppression of both fire and grazing is causing an expansion of the Oak/Maple woodland/chaparral. Historically regular grass fires burned back new young seedlings and clones, and more recently grazing chomped young new shoots.

The 2nd change is the ongoing invasion of Gambel Oak stands by Bigtooth Maple. The 2 trees have much in common, but the differences favor Maple in the long term.

Gambel Oak is more sun and drought tolerant and is usually first to pioneer dry, open hillsides. Bigtooth Maple does better initially in cooler, shadier, wetter areas, and initially colonizes drainages and slope bases. But over time, the Maple expands out of these “secure” footholds and slowly invades, mixes with, and eventually eclipses Gambel Oak. It does so for several reasons. 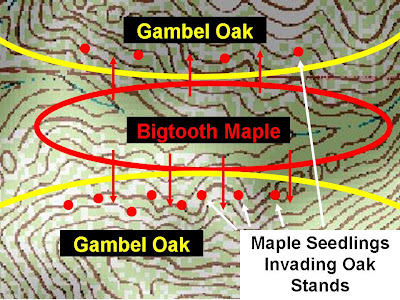 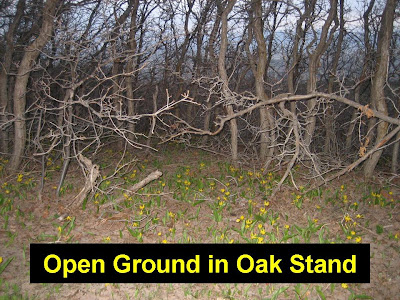 Third is timing: Bigtooth Maple- as we’ve seen this Spring- flowers and seeds way earlier in the year than Gambel Oak. 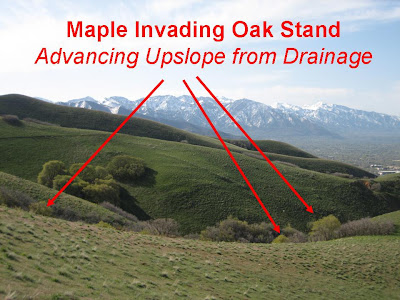 Fourth is rate of Growth: Over the course of the growing season, Bigtooth Maple grows faster in both stem and crown than Gamble Oak.

And fifth is seeding. Maples of all kinds, blow away the Oaks of all kinds in terms of sheer numbers of seeds produced. And although here in the Wasatch the vast majority of reproduction and expansion for both species is asexual (stem-layering for Maple, root-cloning for Oak) the sheer numerical advantage in seeds give Maple a higher cumulative shot at inserting seeds into Oak stands than vice versa.

The cooler, higher, shadier, or more North-facing the site is, the likelier and more successful Maple succession will be. But there’s a delicate balance: if the site is too cool, moist or shady, the canopy of the Maples will in turn enable invasion by other shade and cold-tolerant trees, such as White Fir and Douglas Fir. 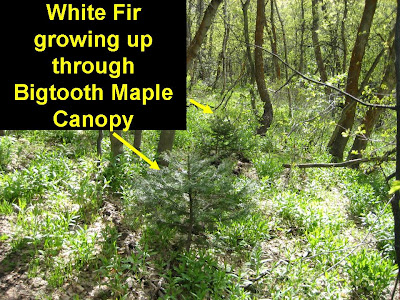 The higher up you go, the more likely becomes this type of multi-stage succession. Over centuries or even just decades, the successional processes can lead to significant changes in the composition and character of mountain forests.

And when we start to look at time frames of a few thousands of years, the changes get even more dramatic, as we’ve already seen with relic Ponderosas, Joshua Trees and Creosote, and as we’ll see shortly in our our back yard of the Wasatch with hybrid Oaks. But first let’s turn our attention to that 3rd tree of the foothills, the one that just about everyone ignores: Mountain Mahogany.

Tangent: So how about this bitchin’ new logo? Is this sharp looking or what? Makes me want to put it on a T-shirt or a bumper-sticker or something…I’m particularly proud of it because of my absolutely dismal lack of artistic ability. Which is really sad when you think of what an amazing artist my Dad is. Guess in this case the apple fell far from the tree… like it rolled down a ravine, fell into a river and was carried out to sea or something. 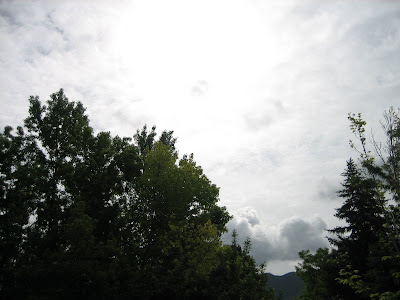 Extra-whimsical-tangent: While I’ve been typing this the rain’s stopped, sun is poking out of the clouds. Looks like my rant worked…