4 Cool Things about the Black-headed Grosbeak 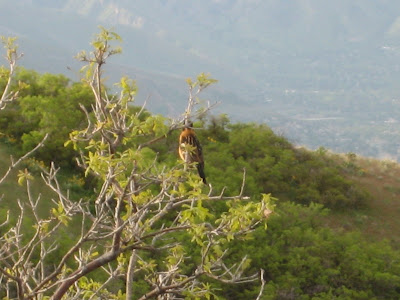 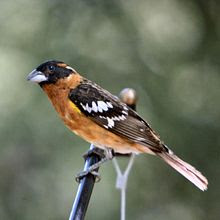 Tangent: As we have discussed previously, I am a lousy wildlife photographer. So I have supplemented my lame, partially obscured, blurry photo (left), with this clear crisp one I pulled off the web (right)

A (Semi) Spirited Defense of My Lame Wildlife Photos 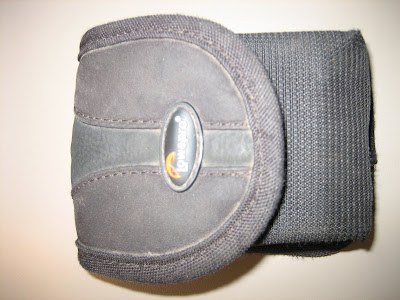 It should be noted that most of the time I take a wildlife photo, it’s not like I’m sitting out there quietly for 4 hours with a folding chair and a tripod; I’m mtn biking shortly before or after dawn, usually going fairly hard, with my heart up above 140BPM or so. I see the creature, stop pedaling, brake to a stop, and pull out my camera, which I keep in the rear left pocket of my bike jersey (Biking jerseys have 3 pockets across the back on the bottom, where cyclists keep things they want to have handy- tubes, gels, etc.) The camera itself I keep in a padded case, which opens quickly, but it’s still another step. So most often, whatever I am trying to photograph has run, flown or slithered a fiar distance away before I get my shot. 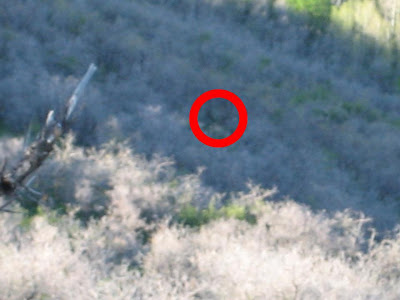 For example, this morning I surprised a herd of about 8 elk up in Pinebrook, including 2 magnificent bulls. But by the time I snapped a photo, here’s what I got. Yes, there is an elk there… inside the red circle… (pic right)

Back to the Bird

But lame as my photo was, it was still good enough for Wonder Boy to ID the bird.

Tangent: “Wonder Boy” is how I will now refer to my 8-year old, whom I’ve profiled previously as canyoneer, dirty fighter, and peanutbutter-dispersal-agent. He is also a completely obsessive wildlife nut who memorizes animal and bird identification guides. When my wife and I see an interesting bird at the backyard feeder, we call Wonder Boy, who comes running over, and 9 out of 10 times IDs the bird immediately, without consulting a guidebook. 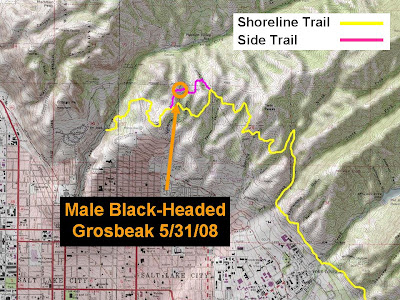 The bird is a male Black-headed Grosbeak., Pheucticus melanocephalus, a fairly common songbird of the American West, that winters down in and summers/breeds in the Western US and . The male’s song is like a faster, slightly more appealing (described at “sweeter” in one source) version of a Robin’s song. They’re usually found in open woodlands and seem to avoid coniferous forests.

Grosbeaks are seed-eating songbirds with large beaks. As a group they are polyphyletic. Yesterday when we looked at Balsamroots and Mule’s Ears we talked about the difference between a monophyletic and a paraphyletic grouping. A polyphyletic grouping is looser still than a paraphyletic grouping, in that the traits its members share have evolved separately and independently. A (rather lame) example in the human world might be a bowling league; the members all bowl, but they’re not (necessarily) related, and they (probably) all learned to bowl independently. (Ow, that is a really lame analogy...)

Many Grosbeaks, including the Black-headed Grosbeak, are members of the Cardinal Family, Cardinalidae, but many others are member of the Finch family, Fringillidae, and 2 species seem to be members of the Tanager family, Thraupidae. Pheucticus, a genus within the Cardinal family, includes 6 Grosbeaks, all native to the Western hemisphere, 3 of which can be found in the continental US.

4 Cool Things about the Black-headed Grosbeak

First, it breaks a common “rule” in songbird behavior. Typically in species in which the male has bright, showy plumage, the male does not assist or participate in incubating the eggs. A rare exception is the male Black-headed Grosbeak, who takes on an equal share of the incubation duties (it’s not all Alan Alda though- he partners with a new mate every year.) And interestingly, the colorful plumage of the male doesn’t extend to the head, so that when he is incubating the eggs, only his camo-friendly brown feathers are visible.

Second, the Black-headed Grosbeak is one of the few birds that can happily eat Monarch Butterflies without difficulty or negative after-effects. 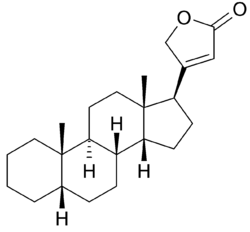 Details: Monarch butterflies are conspicuous and slow, clumsy fliers.Their only real defense against predators is that they're poisonous and terrible-tasting. They do this through the presence of a type of steroids in their bodies called cardenolides, (diagram left) which they obtain by eating milkweed. Apparently the Black-Headed Grosbeak has evolved an immunity to the cardenolides in Monarchs (and may therefore play a small but welcomed role in reducing the number that eventually wind up on my windshield.)

Even More Detail: So this same evolution-of-immunity to cardenolides was also achieved by the Monarchs themselves. Milkweeds, or more specifically the 140 species of plants that comprise the genus Asclepius, are experts in chemical defense, producing cardenolides and several other nasty compounds, and providing a valuable food source for the fair number of butterflies, moths and beetles who've evolved the necessary immunities. Cool Corollary: In other words, the Monarch has had its own evolutionary trick pulled on him by the Black-headed Grosbeak. 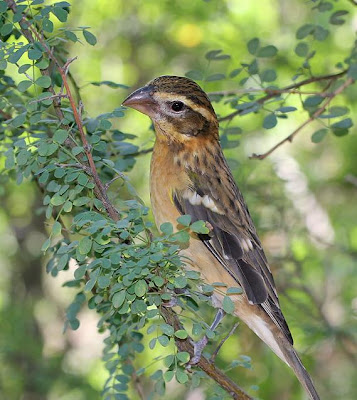 Third, the females (pic right) also sing. In general, the female song is usually a simpler version of the male song. But once in a while, a female will sing a complete, full male song. Ornithologists suspect that this behavior is intended to trick her mate into thinking another male is courting his mate and encourage him to spend more time around the nest. (I swear I have a friend that has this exact same thing going on with his wife…) 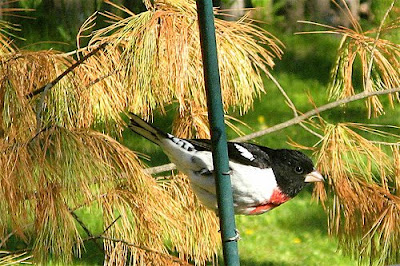 Fourth, the Black-headed Grosbeak is closely-related to the Rose-breasted Grosbeak, Pheucticus ludovicianus, (pic left) which winters further South in Central America and summers/breeds in the Eastern and Central US and .

Where Rose-breasted and Black-headed Grosbeaks overlap they often hybridize, and if this story sounds familiar that’s because it’s exactly the same story I told about the Lazuli Bunting & Indigo Bunting, which in turn was pretty much exactly the same story I told about the Stellers Jay & Blue Jay. In each case a Western bird and a closely-related Eastern version of that bird occasionally bump into each other and readily hybridize. In fact, it’s questionable with these 3 pairs: Black-headed/Rose-breasted Grosbeak, Lazuli/Indigo Bunting and Stellers/Blue Jay are really different species, or are in fact conspecific, which means that they’re just different versions or subspecies of the same species.

The reason this East-West division seems to be so common is the . For millions of years, the has acted as a barrier to these woodland/forest-dwelling birds, and the separation it has enforce has started each of these pairs on a path toward speciation. But over the last 150 or so years, towns have sprouted up across the . Settlers planted trees in their towns, and these towns have developed into little “woodland islands” which have enabled the migration of these birds East or West across the former prairie and brought them into contact once again with their old cousins, leading toward hybridization and therefore potentially away from continued speciation.

These 3 pairs of birds- Black-headed/Rose-breasted Grosbeak, Lazuli/Indigo Bunting, and Steller/Blue Jay are fascinating because not only do they each give us a glimpse of evolution and speciation midstream, but because they also highlight how human activity can and does alter or even reverse that process.