Just a quick post, and one with no great botanical revelations, but worth noting because of some interesting country I covered yesterday. 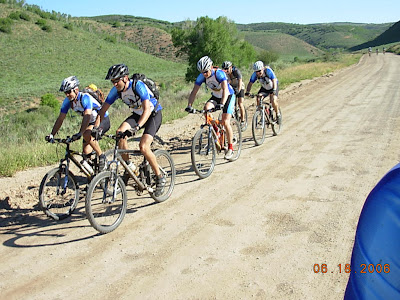 Yesterday was the 3rd annual Steiner100. When my friend Rick (the aforementioned organic chemistry professor) turned 60 two years ago, he organized a 100-mile mtn bike ride that involved pedaling away from his house on the East bench of Salt Lake City at 6AM, riding up and over into the Kimball Junction/Park City drainage, riding a whole bunch of trails, and then returning up and over the Wasatch Crest, dropping down back into Salt Lake Valley and pedaling back to his house., and in doing so, pedaling over 100 miles, overwhelmingly on dirt.

The ride was a great success, and we repeated in last year and planned to do so this year. But this year the late heavy snowpack is still blocking our planned route. So yesterday, for the 3rd annual Steiner100 we chose an alternate route: one that was much shorter- only 60 miles- but way tougher, using seldom-traveled, overgrown, narrow technical trails, full of logs and gut-busting climbs and Gambel Oak that scratched your arms and legs and aspen and serviceberry branches that whacked you repeatedly in the face. 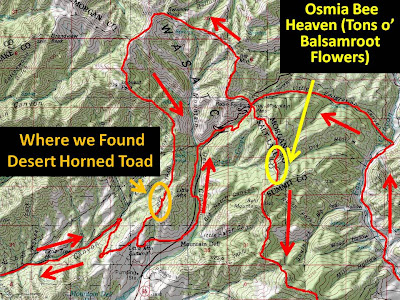 But the single coolest thing about the Steiner60/100 yesterday was one amazing giant meadow/slope almost ¼ mile across, filled with blooming Balsamroot (Arrowleaf I think, we were moving fast). And no, I didn’t get a picture- this wasn’t a take pictures kind of ride- but I’d circled what I think is the location on the map for this post, and right now, and probably for the next few days, it is the most amazing blast of yellow flowers I’ve ever seen. If there is a heaven for an Orchard Mason Bee, that meadow is it.

Down here in the foothills the Balsamroot flowers are all but gone- just wilted, withered heads remain. But higher up, yellow flowers of all sort- Arrowleaf Balsamroot, Cutleaf Balsamroot and (tons of) Mules Ears throughout the ride. We also passed huge numbers of Sweetpea, Lupine, Larkspur, Indian Paintbrush, and even a lone Columbine. 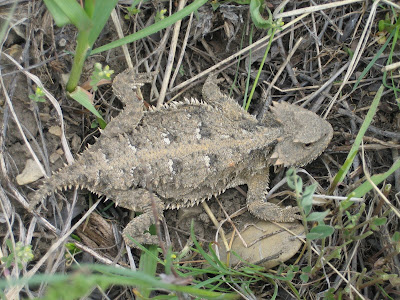 At the end of the ride we traveled a seldom-ridden singletrack connecting Affleck Park to Little Mountain Pass. About a month and a half ago I was hiking this same stretch with the kids and came across this guy- A Desert Horned Lizard, Phrynosoma platyrhinos. I’ve been meaning to blog about him for a while, so I guess this is as good a time as any.

There are somewhere between 12 and 15 species of Phrynosoma, or horned lizard, all of which are native to North America. (OK so I guess maybe this isn’t going to be such a short post...) The most common in Utah is P. platyrhinos, and specifically the subspecies P. platyrhinos platyrhinos, the Northern Desert Horned Lizard, which is the Horned Lizard found up here in Utah and Idaho.

Tangent: Here’s another thing I’ve learned from doing this blog: pretty much any critter we look at- birds, moose, lizards- when you get into it, there’s always a whole bunch of species and subspecies. It’s like each critter is a snapshot of speciation and evolution in action. It makes me think that head-in-the-sand creationists and other anti-evolution diehards just really don’t get into the variety and diversity of critters all that much, or to put it another way, they just don’t know much about critters. 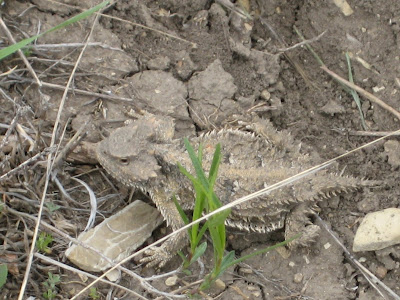 First is something you probably already thought you knew: when threatened, they squirt blood from their eyes. In fact, this is the primary reason I wouldn’t let my kids try and catch it last month. But the truth is a little more complicated; Horned Lizards do squirt blood from their eyes, but virtually never when threatened or handled by humans. But they do so routinely when threatened by dogs. And so it’s thought that the blood-squirting evolved specifically as a defense mechanism against foxes and coyotes, and so a canine is most likely to trigger it.

Tangent: BTW, both these Horned Lizard photos are mine, and are- if I may say so- not too shabby. Another fine step on my journey of redemption as a wildlife photographer... 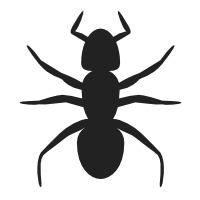 The second cool thing is that they’re the only lizards in the world that appear to be specifically evolved to eat ants. Their body shape, hunting habits, tongues and teeth are all optimized for ant-hunting, and one of the most interesting adaptations is that they have far and away the largest (proportionally) stomachs of any lizards. Ants are nutritious, but have lots of non-digestible mass- namely the chitin of their exoskeletons. So to get a good meal from ants, a lizard needs to eat a lot of them. The over-sized stomach allows the Horned Lizard to “over-eat” by a wide enough margin to metabolize an adequate meal.

It’s hot here. And dry. Can’t believe it was 3 weeks ago that I was bitching and moaning about the rain. Our lawn is taking a beating; I better keep an eye out for D. sanguinalis making a comeback. I’d love a good thunderstorm right about now.