Summer in the Foothills and My Lame Race-Coaster

Until this morning, I hadn’t ridden Shoreline trail for over a month. Every year, early in the season, say March through May, I ride Shoreline like a couple of dozen times, because it’s pretty much the only rideable snow-free singletrack around. Then when all the trails in Jeremy Ranch and Pinebrook and Mill Creek and Park City melt out, I immediately start riding up there and pretty much forget about biking in the foothills until Fall. 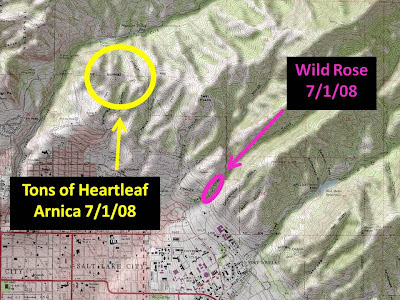 But every once in a while, even in high summer, the logistical ease of riding from the house wins out, and I ride Shoreline again, as I did this morning. And I found 2 great new flowers.

The 1st was Wild Rose, Rosa woodsii. Just as “Woad” is probably the coolest name for a weed, “Wild Rose” is just about the most romantic name I can think of for a wildflower. It suggests un-tamed beauty and freedom and elegance all at the same time. (They should have given my crush-flower, Blue Flag, that name, but of course Blue Flag is an Iris so that wouldn’t have made any sense…) 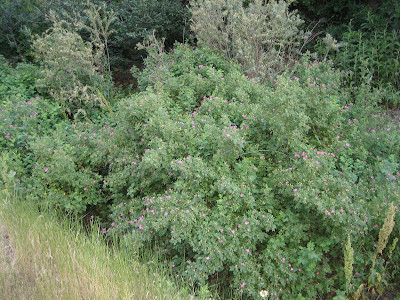 Wild Rose is a low brushy, thorny shrub that grows in dense thickets, usually in watercourses. The flowers are always 5-petaled, perfect, regular, insect (usually bee)-pollinated, and easy to identify.

Tangent: Cultivated roses obviously have way more than 5 petals. It’s thought that the additional petals were originally stamens, which over countless generations were selected by breeders for their petal-like qualities, until they became indistinguishable from “true” petals. The original wild ancestors of modern cultivated roses were from somewhere around Iran. 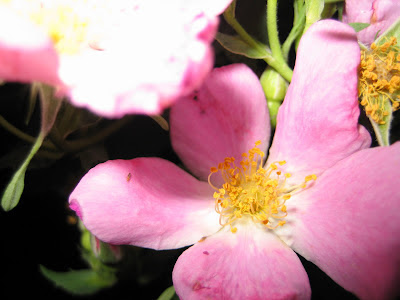 Roses employ an “Agent-Agent” Pollination-Seed Dispersal methodology. As the season progress, the pollinated flowers develop into rosehips, each of which contains a number of rose seeds, which are in turn dispersed by the many creatures (agents) who eat rosehips and then pass the seeds, including birds, squirrels and Grizzly Bears. Wild Rose also reproduces asexually, both via root-cloning and stem-layering.

There are over 30,000 species of rose in the world, more than 10,000 of which are cultivated. Roses have been bred into nearly every color except blue, as I mentioned previously when discussing Sweetpea genetics.

Yet Another Yellow Flower 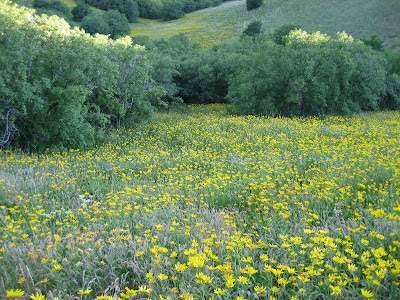 The 2nd flower was somewhat of a surprise. Earlier in the season, I mentioned how the Shoreline trail was lined with Balsamroots and Mules Ears. By now I knew they’d be pretty well spent, and so expected the foothills to be largely devoid of flowers. So I was pretty surprised to see this (pic left). Upon closer inspection I found these new, still-blooming yellow flowers to be neither Balsamorhiza nor Wyethia, but Heartleaf Arnica, Arnica cordifolia. The Right now the Arnica flowers are carpeting the hillsides, lording over an understory of wilted Arrowleaf flowerheads.

Quick Identification Tip: Heartleaf Arnica is the only yellow “sunflower-ish” wildflower around Salt Lake in which leaves always appear in opposing pairs along the stalk. 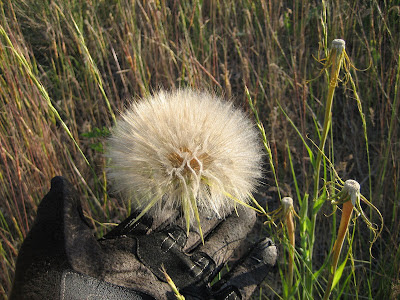 Back during Weed Week (man, was that a great week or what?), I compared Musk Thistle to Dandelion. I should have saved the Dandelion comparison for Arnica, both from a structural and genetic perspective. 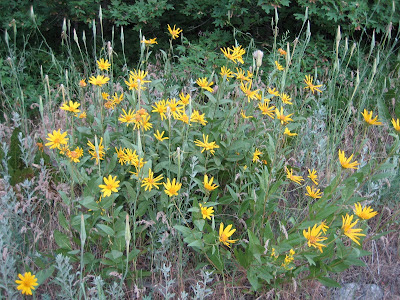 Upon pollination (or apomixis - more in a moment), the calyxes of the component flowers of the composite flower-head turn into little parachutes, waiting to carry away the fertile seeds on a breeze, just like Dandelions. One interesting side note is that unlike Dandelions or Musk Thistle, Arnica flowers include ray and disk flowers, the calyxes of both of which apparently convert into seed-parachutes (my observation only.) And in their seed-chute stage, the flower-heads look exactly like giant Dandelions (pic left, hand for scale.)

Background #1: I previously explained the basics of composite flower structure here, and won’t repeat the same details in this post. 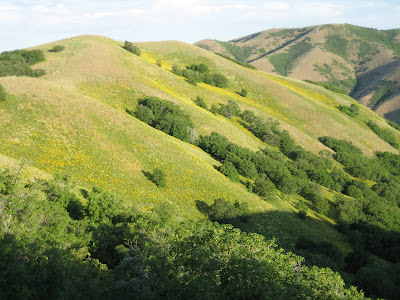 But what’s even more Dandelion-like is the genetic-reproduction methodology of Heartleaf Arnica. Like Dandelions, Heartleaf Arnica populations exhibit high levels of polyploidy. The most common genotype of the plant is either triploid (57 chromosomes) or tetraploid (76 chromosomes) rather than diploid (38 chromosomes.) (Pentaploids- with 95 chromosomes- are not uncommon either.) And again like Dandelions, these polyploid lines- particularly the triploids and tetraploids- readily reproduce asexually, via apomixis, or oftentimes sexually, creating new polyploid lines.

Background #2: I previously explained polyploidy here, and apomixis in asexual triploids here. I won’t repeat the same technical details in this post.

And so it seems that like Taraxacum oficiniale, Heartleaf Arnica has evolved a similar hedge-your-bets sex strategy, running with asexual models when advantageous, but mixing it up a bit sexually to try out new genotypes at the same time. 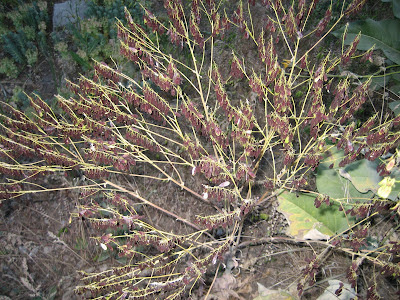 Back during Weed Week, I mentioned the allelopathic black seedpods of Dyers Woad that appear later in the season. Here they are (pic right). 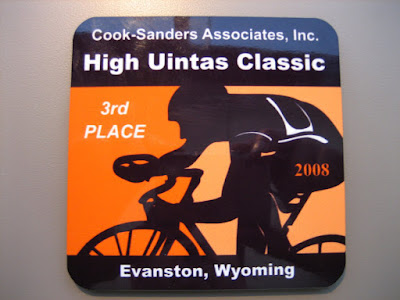 Completely Un-Related Tangent With No Conceivable Segue: So a week ago Saturday I did reasonably well in a bike race. Yesterday I received this coaster in the mail (pic left.) Is this the lamest trophy ever or what? I brought it into the office, waiting for some beverage-bearing visitor to enter, so that I can slide it towards them. 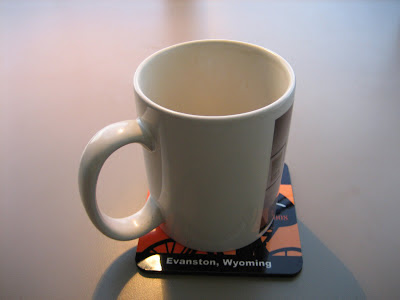