3 Purple Wildlowers, 2 Cool Things About Each, a Really Big Tangent on an Osmia Bee

Yes I know I said I was going to blog about Mountain Mahogany next, but I got distracted by more wildflowers when I was biking up around Pinebrook yesterday afternoon and decided to blog about three purple ones. 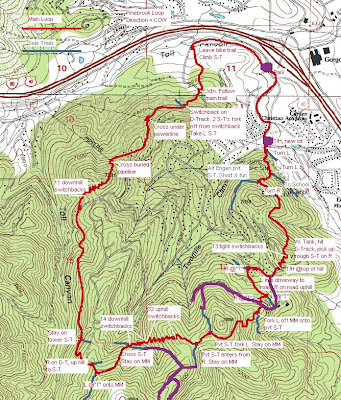 Tangent: In the later Spring/early Summer, as trails melt out higher up, I do most of my mtn biking higher up in the Wasatch. For years my friends and I drove up to , but for the last 4 years we’ve been doing more summer riding up around Jeremy Ranch and Kimball Junction. In this area, about 15 minutes drive closer to Salt Lake, on the North side of I-80, a significant network of trails have been developed over the last 5 years or so between 6,000 and 8,000 feet. On the South side, up behind the Pinebrook subdivision, is and even better, more accessible, and far less trafficked trail network that we’re still finding new routes on after 4 years. Technically the trails are “private”; we’re not really sure what that means, and we’ve never been challenged over access. The Pinebrook trails (crude, incomplete map that I started and never finished 4 years ago left) are all singletrack, twisty and technical enough to be challenging, but all very clean-able. Most are set in deep enough forest that you have the feeling of being out in the middle of the boonies, even though you’re almost always within a mile of houses. The Pinebrook trail network eventually connects to the Mid-Mountain trail, giving you the option of linking up over to or even up and over back to . As if all that weren’t reason enough to ride there, it’s a great area for moose and elk.

3 Purple Wildflowers, and 2 Cool Things About Each 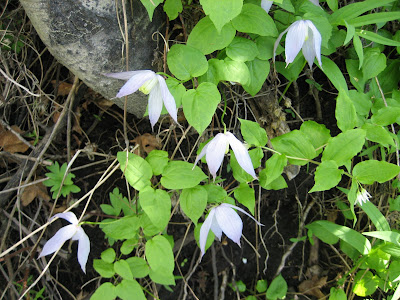 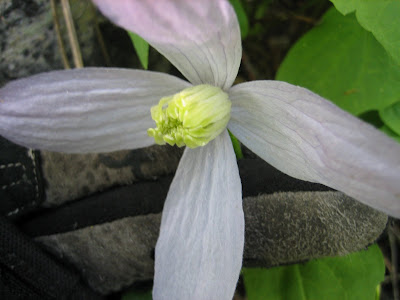 First is this guy, Western Clematis, Clematis occidentalis. The first cool thing about it is its flowers, which have not petals, but has colorful sepals instead, sort of like a Blackbrush flower, only bigger and more elegant. The 2nd cool thing is that it’s a climbing vine, of which there are only a handful native to . Because it’s a climbing vine, it’s not unusual to see these flowers a few feet up off the ground, their vines wound around some small tree or large shrub. This is the 2nd climbing vine we’ve looked at- the first was Poison Ivy. 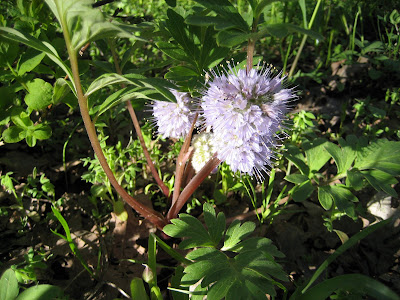 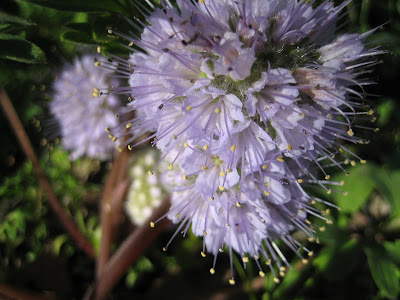 Next up is this little fellow; I’ve been seeing it all over the place for weeks but just ID’d it. It’s Ballhead Waterleaf, Hydrophyllum capitatum. The 1st cool thing about is is that it’s greens and roots are edible, and were regularly collected and consumed by Indians, and later early settlers. (They supposedly require boiling, and no I haven’t tried it yet.) The 2nd cool thing is that this flower is a favorite pollen and nectar source for one of our native Osmia bee species, making this a perfect spot for a…

Tangent about Pollen, Nectar, Flower Visitantion and Osmia lignaria: Osmia lignaria, commonly known as the Mason Orchard Bee, is one of ’s important wild pollinator species. I blogged back in April about the life cycle of Osmia bees in general, but it’s worth taking a closer look at this bee because it highlights the very different flower visitation habits of solitary vs. social bees. 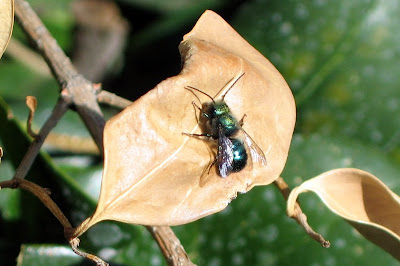 After emerging from her nest as an adult, a female Mason Orchard Bee has between 4 and 8 weeks to live. During this time, she has to mate, find a suitable hole for a nest, and lay roughly 8 eggs in each nest, each with its own compartment and food provisions to nourish the egg through its larval and pupal stages and into adulthood. And she typically does this for an average of 4 separate nests during her short life. (And I thought my summer was busy...)

Nested Tangent: She lays roughly 3 male eggs for every female eggs. (Bees are one of a number of insects- mostly belonging to the order Hymenoptera that can apparently choose the sex of their offspring.) And this brings up the whole subject of sex ratios and why most animals produce equal numbers of male and female offspring, but others don’t, but this fascinating topic is unfortunately beyond the scope of this post, or even this already lengthy tangent.

Now different flowers produce different amounts of pollen and nectar at different times. Social bees, such as honeybees, have workers who specialize in collecting either pollen or nectar, and typically not both. But a solitary bee has no option to divide tasks amongst sisters; she has to gather pollen and nectar for all her brood, And so the collection flights of the Mason Orchard Bee follows a much different course than the typical collection flight of a worker honeybee. 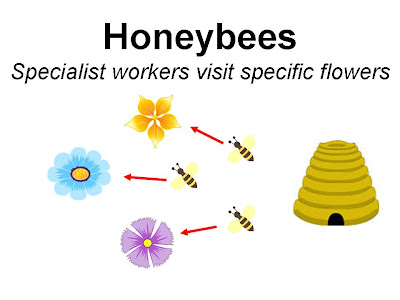 While the honeybee travels repeatedly back and forth to the same type of flower to collect the same thing (pollen or nectar), the Mason Orchard bee visits multiple flower types during the same flight, collecting both pollen and nectar. 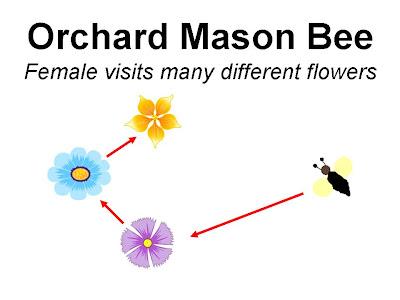 Nested Tangent: This is yet another reason I’m partial to Osmia bees- lots of different tasks to do and places to visit in the day, instead of the same-old over and over… 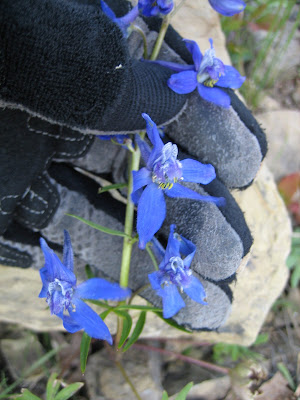 Our 3rd purple wildflower is really cool. It’s Low Larkspur or Nutall’s Larkspur, Delphinium nuttalianum. There are a number of Larkspur-type species. Their distinctive shape is caused by the top sepal, which juts back horizontally. The 1st cool thing about Low Larkspur- well I guess the 2nd, technically, since the shape itself is pretty cool- is that both the sepals and petals are wonderfully colorful, yet very different. The dark outer “petal-looking” leaves are the sepals; when you look “inside” the flower straight on, the real petals are visible- white with delicate purple streaks. 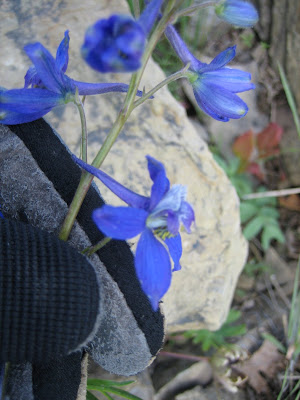 The next cool thing about the Low Larkspur is pollination. Early in the season, it’s most important pollinator is Hummingbirds. But by mid-summer, the Hummingbirds ignore it, and its most important late-season pollinator is queen bumblebees. The reason Hummingbirds only pay it mind early in the season is because in late Spring when the Hummingbirds arrive in breeding season, there aren’t a lot of nectar-rich flowers yet in bloom; the pickings are slim and Low Larkspur looks like a good use of time. But later in the summer, when all sorts of flowers are in bloom, Hummingbirds have a number of nectar-richer flowers to visit instead.

Tangent: Low Larkspur is to Hummingbirds as Oreos are to me. We always keep a pack of Oreos in the house as an “emergency dessert” for our egg-allergic son. (This way when guests bring a “special” dessert, he doesn’t get left out.) I’m not an Oreo fan; if there’s ice cream or real cookies in the house I’ll ignore the Oreos. But if I have the after-dinner munchies, and there’s nothing else around, an Oreo starts to sound not-half-bad. 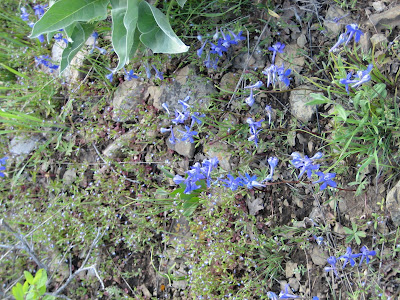 The 2nd- or I guess 4th, so much for consistency in this post- cool thing about Low Larkspur is pretty sinister- it’s poison. Not, apparently, to wild critters, but to livestock big-time. After locoweed, it’s the most poisonous thing to cattle on the Western range. Cattle find Low Larkspur, and several related species of Larkspur- highly palatable and they eat it readily. Unfortunately, all parts of the plant, and especially the seeds and recent growth, contain toxic alkaloids which, in heavy concentrations, are highly poisonous to them.

Chemistry Tangent: Alkaloids are chemical compounds containing nitrogen atoms. There are tons of different alkaloids, and they’re produced by plants, animals and fungi. Many alkaloids have serious pharmacological effects. Examples include caffeine (right), morphine and nicotine.

Nested Chemistry Tangent: My friend Rick, who is- as luck would have it- an organic chemistry professor, looked up the specific alkaloid at work in Low Larkspur. He didn't have a soft-copy diagram for me, but he says it's a monster molecule- multiple rings, tails, and probably 50+ atoms...

The toxicity of Larkspur diminishes as the season progresses, and ranchers generally know to avoid moving their cattle to high meadows (>7,000 ft) before the Larkspur peak has passed, but it’s still a real danger. As recently as 2002, 53 cattle were poisoned in a single incident up in .

So feel free to boil up some Ballhead Waterleaf greens, but don’t eat any part of anything with a “spurred” flower on it. As for me, I’m getting an Oreo.