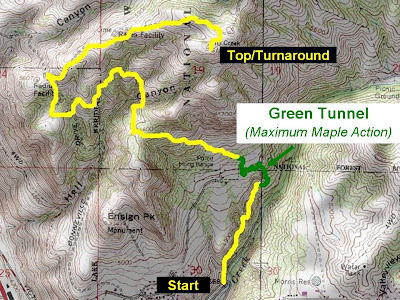 Yesterday late afternoon after it cleared up I rode the Shoreline trail from City Creek up to the 3rd radio tower for the first time this year. The big surprise of the ride was that the trees- Bigtooth Maple and Gambel Oak- both seemed to be about a week further along in leaf development than the same trees, at the same altitude, in the foothills by my house, only 6 or 7 miles to the Southwest. 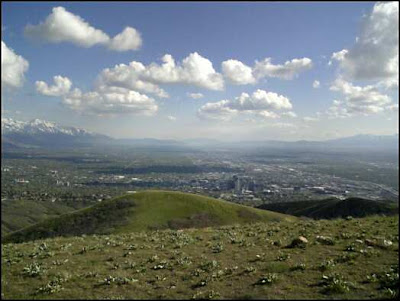 Bigtooth Maple and Gambel Oak are, by and large, the only naturally-occurring really leafy trees in outside of riparian zones below 7,000 feet. When they finally leaf out, the whole feel of the foothills changes radically. As a result, the climb out of City Creek up the Maple-covered Eastern slope of City Creek Canyon was something of a shock- a blast of green that was wonderful to see and to be inside as I climbed (and a bit later descended) through a soft green tunnel of young Maple leaves. 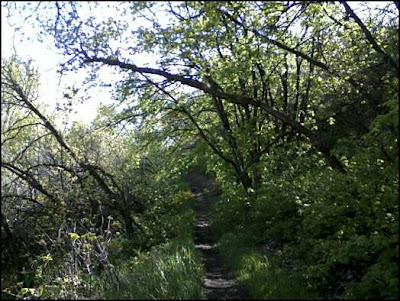 There are over 100 species of Acer, or Maple, worldwide, and all but 2 (in ) are deciduous. Maples have been around for at least 70 million years. They’re wind-pollinated, and their seeds wind-dispersed. Maples are readily identifiable, usually by their highly-recognizable 3 or 5-lobed leaves, but even more reliably, by their samaras, the helicopter-like seedpods which are both distinctive and unique to Maples. has 3 native species of Maple.

Rocky Mountain Maple, Acer glabrum, is- for me- the most elusive, though it’s not particularly rare. I know I’ve seen it before- I think up around or but can’t recall exactly where or when. RM Maple often grows as more of a shrub than a tree.

Box Elder, Acer negundo, is one of those Maples whose leaves are actually somewhat un-Maple-like, but is identified as a Maple by its tell-tale samaras. Box Elder is probably the most reliably “tree-like” of ’s Maples, almost always taking tree (vs. shrub) form, but is generally regarded as a somewhat of a “junk tree”. (A characterization I’ve never agreed with, neither for the Box Elder, nor for the classic “junk” tree, the .) But it grows well here. It’s common along watercourses and is/was frequently planted for shade, because it would grow strong and tall quickly without much care. 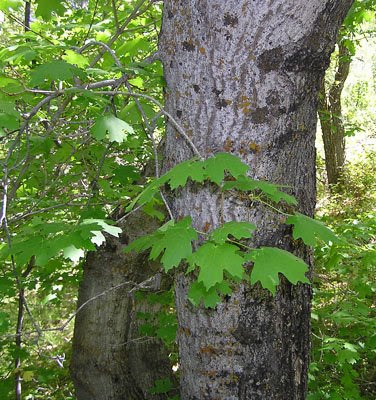 But the most common- and (in the Fall) spectacular- Utah Maple is Bigtooth Maple, Acer grandidentatum. Together with Gambel Oak, Bigtooth Maple is the most common tree in the Wasatch foothills between 5,000 and 7,000 feet, and the never-ending successional battle between the two trees is a fascinating story (and one I’ll cover in a future post.) Bigtooth Maple is found from to , but seems to be nowhere more common than in the Wasatch (and maybe the Oquirrhs, whose East-facing basins light up spectacularly each Fall.) And indeed my first year in , one of my biggest surprises was how great the Fall colors were compared to . The range of Bigtooth is all the more fascinating in that it ends, totally and completely, just 2 ranges to the West, in the Stansburys. Just drive 40 miles West on the Interstate, and you’ll never see another Bigtooth Maple (or any naturally occurring Maple until the Sierras…)

Bigtooth Maple is closely related to Eastern Sugar Maple, Acer saccharum, and in fact some sources list it as but a subspecies of its Eastern cousin. Though Bigtooths can reach 30 or 40 feet in height under optimal conditions, they never attain enough girth to be worthwhile as a source of sap/syrup (though it’s been done.)

Tangent: In the yard of the house where I grew up in is/was an old , big Sugar Maple. One Fall weekend back in the 1970’s, my Dad tapped it for sap, and then made syrup to show my sister and me where maple syrup came from. My memories of that weekend are mainly of a kitchen filled with steam, as the process involved endless boiling and effort for a very modest quantity of product. Still, I remember the episode fondly. It’s a great example of the difference between me and my Dad; he’s one of those guys who can set his sights on any new project, no matter how new or unfamiliar it is to him, and almost always succeed. With my projects- such as boiling acorns or harvesting Glacier Lily corms- it’s generally at best around 50/50… 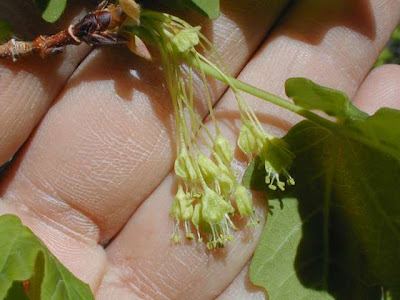 Bigtooth Maple isn’t quite exactly either monoecious or dioecious; individual trees bear either all male flowers, or a combination of male and female flowers; As with most wind-pollinated plants, the flowers are rather dangly and visually dull. Bigtooth Maples produce huge numbers of samaras/seeds- an estimated 235,000/acre in the Wasatch foothills- but few seeds successfully reproduce here; most reproduction here in is through stem-layering, which we talked about when we looked at Bitterbrush. 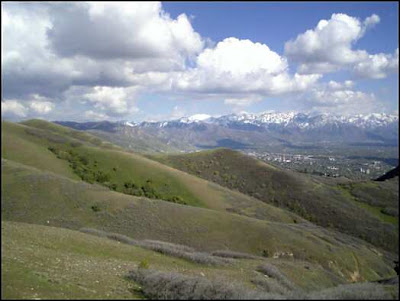 In the foothills, they tend to thrive in shadier, moister drainages, and in the best-watered sites grow into real trees, with wonderful shade. The photo to the right shows leafed-out Bigtooth Maple in the drainage, and still-bare Gambel Oak on the open hillsides. 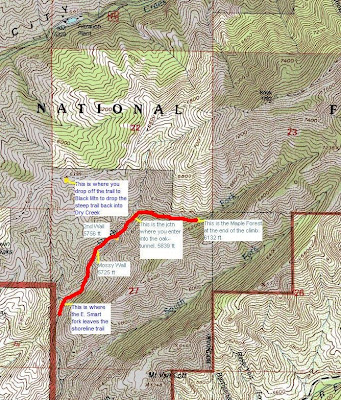 Tangent: My favorite grove of Bigtooths is a couple miles up Dry Creek, way past where the Shoreline trail leaves the drainage, and located- oddly- at or near the encampment of the 2002 kidnappers of Elizabeth Smart. I call the spot (yeah, real original, I know…). In the year following ’s rescue, a number of law enforcement and media parties trekked up the drainage and cleared much of the underbrush. 2004 was an exceptionally dry Spring/Summer in the Wasatch, and my friends and I were able to mtn bike up to regularly. It was a beautiful, fun, technical challenging ride. In 2005 and 2006 the water flow in the drainage prevented us from repeating the ride. I returned last Fall only to find the brush grown back in and the upper half of the drainage largely unrideable. Still, it’s a nice hike to a wonderful spot. I’ve included my old home-made map here for reference.