Why Grass is Special, and my Upcoming Monocot Boondoggle 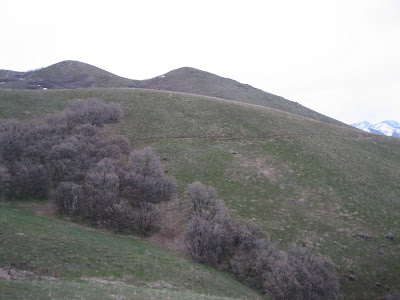 There’s probably nothing more mundane or predictable about Spring than the grass turning green. And as I mentioned yesterday, while the lawns in the valley have been greening up for several weeks, now the foothills are greening up as well. With intermittent Spring snowshowers still happening once or twice a week, the white-capped green hills are a pretty sight on the morning drive into work.

Of all plants, the grass family, Poaceae, is without a doubt the most important to human beings. And I’m not talking about lawns or golf courses; I’m talking about food. The vast majority of what we eat either is, was, comes from, or was fed on, grass. 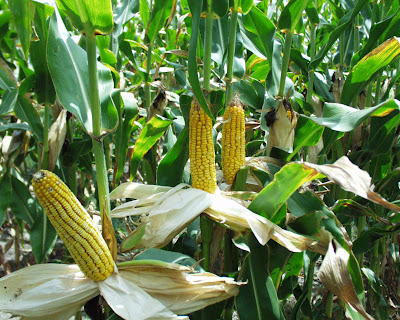 Tangent #1: The evolution of corn is both a great case study of artificial selection and a bit of a mystery. We know that Central American Indians bred corn into pretty much it’s present form through generations of patient and deliberate selection. And we know that it’s related to, and probably descended from a type of Mexican wild grass called Teosinte. But we don’t know or have available the intermediate stages or steps of the selection process. In Michael Pollan’s book, “The Omnivore’s Dilemma”, there’s a great section early on about how much corn is in the modern American diet.

Nested Tangent: Corn uses a special type of photosynthesis common to many warm-climate plants called C4 photosynthesis, so named because the CO2 the plant takes in is first incorporated about into a compound in which each molecule includes 4 carbon atoms, as opposed to a similar 3-carbon atom compound created through the “standard” c3 photosynthesis of most temperate plants (and most other stuff we eat.) This means that by looking at the frequency of the C4-based compound in a human body (or human feces), you can determine roughly how much of their diet is corn-based.

Back to Tangent #1: It turns out that the average modern American’s diet includes a higher proportion of corn than even pre-Columbian Central Americans. Our meat, our snacks, our sodas, our corn-syrup-laden pre-packaged foods, all leave tell-tale C4 molecules in our bodies… 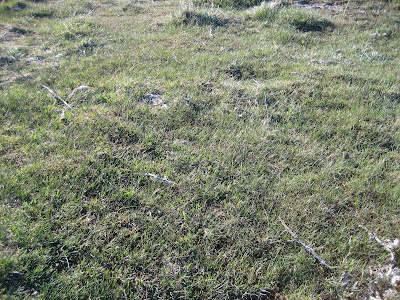 Anywho… back to the point. Grass is super-important and super-prevalent. But what’s really interesting about grass is that although plants have been living and spreading and evolving on land for over 400 million years, grass has only been around for the 60-70 million years. So if grass is so widespread and so successful, why did it take so long to show up?

The short answer is that for grass to evolve, 3 things had to happen.

First, flowering plants or angiosperms had to evolve. As I’ve mentioned before, with over 300,000 known species, but any objective measure, angiosperms have conquered the world. By angiosperm reproduction, as effective as it is, is super-complex (and yes I plan to explain it- probably when I talk about oak), and it can take evolution a while to come up with such a sophisticated design, and as a result, angiosperms didn’t become widespread until around 100 million years ago. (Although the date of their origin is still very uncertain, possibly ranging back to 250 million years ago.)

Second, Monocots had to evolve. There are 2 major group of angiosperms- monocots and dicots. The names derive from the number of embryonic leaves in their seeds, called cotyledons. Monocots have 1 cotyledon, dicots have 2. There are other differences, but the most important difference- especially when thinking about grass- is this: dicots, which include most “standard trees”- like oaks, maples, poplars, willows, etc.- grow from the tip or edge of the leaf. Monocots- grasses, lilies, palm trees, yuccas- grow from the base of the leaf out. So while on a maple tree the oldest part of the leaf is at the base, on a blade of grass the oldest part is the tip. 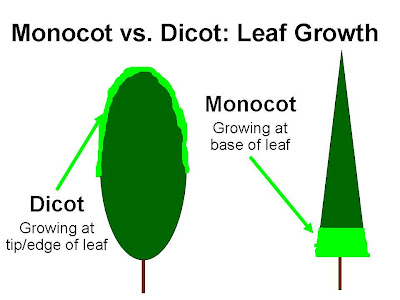 There’s a lot more important stuff about monocots and their relationships with different groups of dicots, which I’ll get into a bit more next week when we visit The Coolest Monocot Ever. 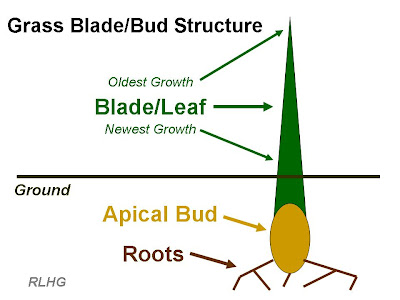 Third, grasses are monocots that evolved in such a way that the apical bud, that is the part that’s doing the actual growing, is underground.

So grass has its dead, old tissue up above ground on the tip of its leaves, and it’s vulnerable apical bud safely underground, which means that it actually benefits from moderate grazing.

But the relevant part in all this to us is the second point, the evolution of monocots. Because not all monocots are grasses and lilies. Some are trees, including some of the freakiest, weirdest trees you ever saw, and the great news is that we’re going to visit a couple of these next week.

Tangent #2: Next week I’m traveling to for a trade show, and I couldn’t be more excited. I’m driving both ways, taking camping gear, mtn bike and hiking boots, and have a terrific week planned. And while I’m there, check out where I’ll be staying. For an adventure- loving outdoorhead/ amateur botanist/ closet-Osmia-sapiens who doesn’t mind a bit of luxury now and again, this is as close to a boondoggle as it gets.

This is great stuff！ I was wondering how you know the growth pattern of dicot leaves? Can you point me to references?

Hi Li- I wrote this post early on in the project, before I started listing sources, so while I can't be certain, I believe my original source for growth patterns of dicots vs. monocots was Colin Tudge's excellent book, The Tree.