Snow Flies, Western Tanager, and I am a Really Bad Wildlife Photographer 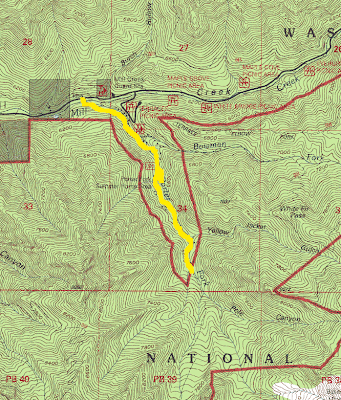 We’ve had a string of snowy mornings this week. They’re quick storms, and the snow melts off quick, but they’ve been close enough together to keep me off the trails. (It's almost as if the weather gods are conspiring to prevent me to trying to eat a glacier lily corm...) Monday’s storm mostly melted off Tuesday, and the overnight temps were predicted to drop below freezing, so I readied my mtn bike, gear and HID light for pre-dawn ride. But when I awoke Wednesday at 5:15AM there was already 3 inches of fresh snow on the ground and more coming down. So I changed plans, grabbed my ski gear, and headed up . 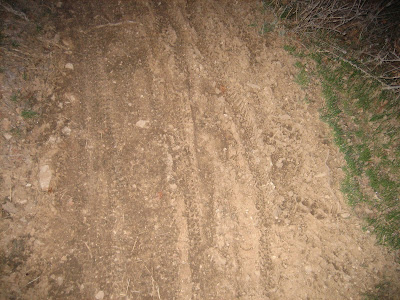 Tangent: In Spring and Winter, the best time to mtn bike in the foothills is right around dawn, if the temps went below freezing the night before. When the trails are frozen, there’s no mud, and you bring the bike back clean. When you ride in the mud, you trash the trails, have an unpleasant ride, and can spend ½ an our or so cleaning your bike. Plus, the traction of frozen ground is outstanding, even as you traverse the deep ruts made by all the dopy riders who went out during the day. So when I wake up before dawn this time of year, the first thing I do is check the thermometer. Between 28F and 31F is perfect: cold enough that the mud is firmly frozen, but not so cold that layering or finger-numbness is problematic. 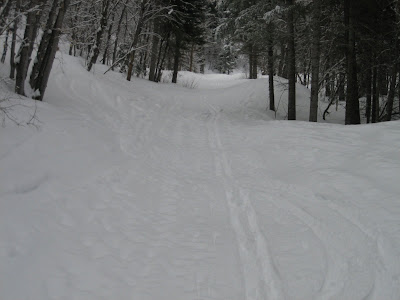 I skied up Porter Fork. Porter Fork is a side canyon on the South side of Mill Creek, and it has a single-lane unplowed road running up it leading to some summer cabins. Beyond the road is the wilderness boundary, and a good deal beyond that is some bowls with some “real” backcountry skiing, but when I ski it as a before-work quickie I just skin up the road, turn around and ski down. If the snow is fresh I can make probably a hundred-plus easy turns back and forth across the road on the way down. This is what it looks like on the way down, stopping to take a look back up the road, my up-track in the center.

Tangent: I’m not a great skier. I learned in my late twenties, and got decent enough to enjoy it, but never good enough that I look great doing it. I’m not really a winter guy, and always eagerly anticipate spring and especially summer. So skiing is sort of a “back-up” activity for me. I’d almost always rather bike or hike. But I realized years ago that “fighting” the seasons almost always ultimately brings frustration, and have come to enjoy getting around on skis in the backcountry. 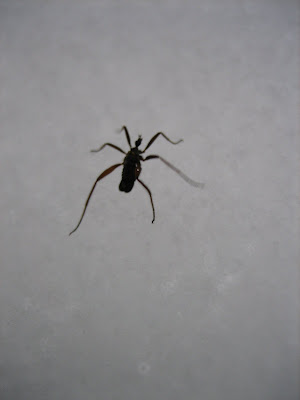 hough the snow was nice, I didn’t expect to see anything really “waking up”. But I came across something pretty cool: a snow fly.

There are at least 3 different types of bugs that you can find regularly trekking across the snow: snowfleas, stoneflies, and snow flies. Stone flies belong to a genus of wingless crane flies called Chionea. There are over 30 species of Chionea around the world, 4 of which occur in : Chionea alexandriana, hybrida, jellisoni, and nigra. Unfortunately I couldn’t find decent pictures of the 4, so I haven’t been able to ID this guy’s species yet.

Snow flies live as adults only in winter; they trek across their snow, mate, and then the females trek around, laying up to 200 eggs, one at a time, under decaying leaves, where they’ll hatch and develop over the Spring and Summer as larvae before repeating the cycle the following winter. There are two really cool things about snow flies:

First, they never eat. Not as adults anyway. Apparently they only drink (from snow!), and water they intake combined with the calories they stored up as larvae keep them going throughout their 2-month-long adulthoods. 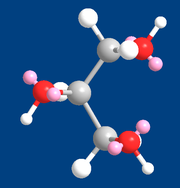 The second is why they don’t freeze. Amazingly, they produce glycerol in their hemolymph (what insect have for blood). Glycerol is a chemical often used by modern humans as a food preservative or sweetener, but it also acts as an antifreeze. So here’s this bug that stores up enough calories as a youngster and then produces its on antifreeze so that it can truck around in the snow, in sub-freezing temps, for up to 2 months, without eating! And where does it get those calories from as a larvae? For at least several species- rodent feces. Now that’s an efficient bug.

Tangent: I stole the graphic of the glycerol molecule from Wikipedia. I thought it looked cool, and when people saw it in my blog they’d think, “Cool. This blog looks really scientific. This guy is probably wicked smart.” But now that I’ve posted it, I realize how silly it is. First off, who- besides a chemist- is going to recognize it and say, “Ah yes, that’s glycerol!” Or for non-chemists, are they supposed to see it and say, “Oh hey, I see like atoms and stuff in that picture. Oh I get it- that ‘glycerol’ he’s talking about must be a molecule. I’m glad he clarified that he was talking about glycerol the substance, because otherwise I might have confused it with say that band ‘Glycerol’ or something else…” 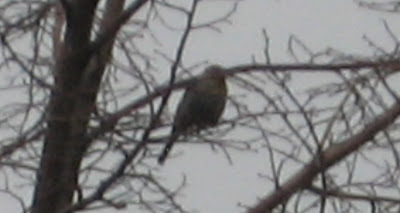 The snow was nice and I had fun making “first tracks” on the way down. I drive directly from the trailhead to the office. As I walked across the office parking lot I heard a wonderful birdsong, looked up and saw my first Western Tanager- a male- of the year. 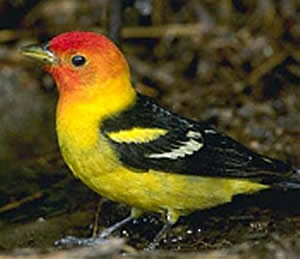 The Western Tanager, Piranga ludoviciana, is a beautiful songbird that summers in the American and Canadian West and winters in . Piranga is a genus of tropical songbirds within the Cardinal family that includes 9 species of “Tanager”. Of these, the Western Tanager migrates furthest North in summer, reaching the . Male Western Tanagers have a beautiful bright red heads in breeding season (and since breeding season is pretty much the only time they’re in , that’s pretty much how we always see them.) Interestingly, the red color is produced by pigment called rhodoxanthin, which the bird itself doesn’t produce but obtains from eating insects who in turn obtain it from plants they eat. 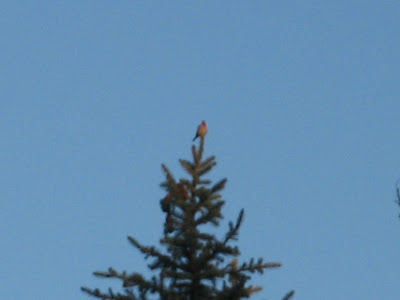 Tangent: I know that my photo (above right, under cloudy sky) is truly awful, and that I could never earn a living as a wildlife photographer. But I feel this need to use my own photo when possible. I’ve also included this slightly better photo, of my second Western Tanager of the season, spotted yesterday evening, on top of a spruce in my neighbor’s back yard.

The Western Tanager’s song is beautiful, varied and charming. But as I looked at this fellow perched in a bare tree in the office parking lot on a foul-weather morning, I couldn’t help but wonder if he was singing a lament of regret at having left the warmth of for this cold, wet place.

I didn't see any tanagers this year. Last year they were all over our place here on the Oquirrh benches in Lake Point, around Memorial Day as I recall. My SIL up in Logan also mentioned seeing them last year. I wonder if their migration path doesn't always include Utah.

This was (is?) a weird climate/bird year. The Lazuli Buntings, which spent >3 weeks at our feeder the 3 previous years, barely showed up.

I've been in Western Canada the last 3 weeks and don't think I've seen the mercury break 72F tops. Hoping I'll finally experience a "summer" when I get back to UT this week...