It’s Called “Limber” For A Reason

Saturday I had a full day of backcountry skiing with Organic Chemistry Rick (guy who never reads my blog) and Clean Colin. 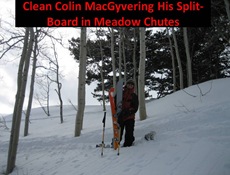 Tangent: Actually it was only skiing for OC Rick and me; Clean Colin is a snow-boarder, and he takes a split-board into the backcountry. A split-board is a diabolically clever contraption that looks like a normal snowboard, except that it comes apart, or “splits” longitudinally into two separate boards. The bindings disconnect from the standard snowboard position and reconnect into a ski-binding-like position on either piece of the board. The boarder applies mohair skins to the two pieces and ascends the slope like a backcountry skier. At the top, he/she removes the 2 pieces, reassembles the board, and reinstalls the bindings. At the bottom of the run, the process is repeated and reversed.

The downside of the whole split-board methodology is that it is huge equipment dick-dance, requiring a speedy, non-trivial, MacGyver-like disassembly/reassembly process, with various cables and clamps, not once, but two times for every run. Clean Colin does the routine as smoothly as any boarder I’ve seen; nonetheless, it makes me tired just watching.

Nested Tangent: One of my big regrets from the 80’s is that I didn’t watch more MacGyver. I think I caught a total of about 5 episodes. My favorite (and least plausible?) was the one where he was being held captive in this big storage tent in the jungle camp of a South American drug lord, and escapes by building an airplane out of spare parts he finds in the tent. I can still remember him looking around, looking real thoughtful, like, “OK, let’s see… I’ve got a lawn-mower, some plywood, a coil of rope, and a Betamax VCR… hmm… What could I do with this stuff?...” Loved that show. 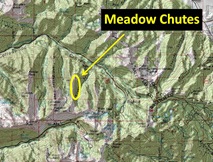 We skied/boarded in an area known as Meadow Chutes, a series of parallel Northeast-facing runs in a side drainage on the South side of Big Cottonwood Canyon. For the most part the trees in this area are standard Wasatch fare: Tall Englemann Spruce in the bottom of the drainage, and stands of Douglas Fir mixed with large swathes of Aspen on the sunnier slopes. All of the runs in Meadow Chutes are accessed from a common ridgeline, and this ridgeline is treed with a mix of Douglas Fir, and our old friend, Limber Pine, Pinus flexilis.

Tangent: The Douglas Firs on this ridge have the largest cones, up to 3.5” long, of any I’ve come across in the Wasatch (pic right).

I’ve blogged about Limber Pine before, focusing mainly on its fascinating co-evolutionary history with Corvids, and its range and presence in the Wasatch. But I haven’t talked about one of its interesting and unique characteristics- the flexibility, or “limber-ness” for which it is named.

As I’ve mentioned previously, Limber Pine in the Wasatch tends to occur up on high, exposed ridgelines, and these are places that see plenty of snow and vicious winds throughout the winter. Oftentimes Limber Pine grows where other trees can’t grow, or if they do grow in such places, the grow up all gnarled and misshapen. But Limber Pine seems to do fine in such spots, and the reason is its namesake flexibility. Limber Pine is the most flexible real tree in Utah. You can take any branch of 2 fingers or less diameter and bend it 90+ degrees without breaking, as I did in this video. You can bend any branch/twig of 1 finger or less diameter and bend it clear back on itself (net 180 degrees) as I did in this video. Tangent: OC Rick has zero patience for my screwing out with tree videos/experiments on powder days. (Actually, OC Rick has zero patience for anything other than climbing and skiing on a powder day. He doesn’t stop to eat, drink, pee or anything. The guy is a backcountry machine. Every ski day with OC Rick is a Powder Jihad. If we don’t finish the day with at least 6,000 vertical feet, he returns to the car mildly grumpy and sour.) To get these videos, I had to kick it into high gear on one of our yo-yo climbs, and outpace him returning up our skin-track, which gave me the necessary 3-4 minute window to make these videos.

Try this trick with any other tree in the Wasatch, and you’ll just snap it off. In fact, you can sometimes even tie a Limber Pine twig in a knot, as I almost did in this home video later that evening (videography courtesy of Bird Whisperer.) This flexibility means that Limber Pine limbs can bend and sway in high winds, then rebound to their normal position without breaking. It also enables these limbs to bend under the weight of heavy snow, rather than stiffly fighting the weight till they snap. And this bending not only eases strain; by drooping the limbs actually shed excess snow. In fact, though you’ll often see snow-loaded spruces, firs and Douglas Firs following a storm in the Wasatch, you’ll almost never find a Limber Pine with more than a dusting of snow on its boughs.

The 2 most common substances in plants are cellulose and lignin. Cellulose is present in all plants, as well as green algae, and is the most common organic substance in the world. Cotton is about 90% cellulose; most wood is more like ½ cellulose.

Lignin is present in all woody plants, and is the substance that strengthens plant tissue. Without lignin, plants can only “stand up” via water pressure in their tissues. If an Arrowleaf Balsamroot, or a Glacier Lily or a Tulip gets dried up, it wilts. If an Oak or Maple or Spruce dies of thirst (technically a xylem-embolism) it remains standing, a dead snag.

Tangent: There are no animal enzymes capable of breaking down either cellulose or lignin. Specifically, cellulose consists of a long chain of glucose “units” connected to one another by a type of linkage called a beta acetal. 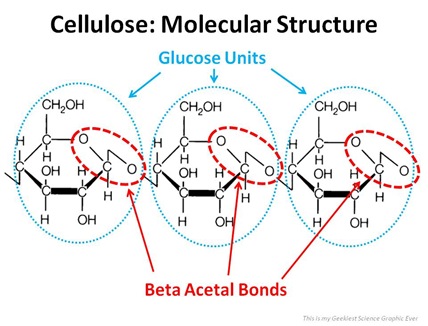 Nested tangent: Interestingly though, there are animal enzymes capable of breaking down beta acetal bonds in other organic molecules, the best example being lactase, which breaks the beta acetal bonds in lactose. Animals (including people) that produce lactase can digest lactose, and therefore milk. 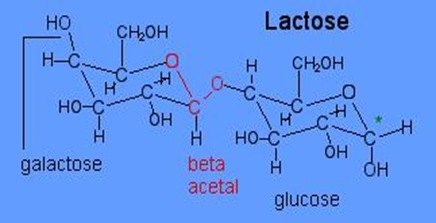 Animals that “digest” cellulose or lignin, such as sheep, horses and termites, do so with the assistance of bacteria living in their guts. These bacteria produce enzymes capable of breaking the beta acetal bonds in question.

We’ve already talked about the Standard Wood Architecture and some of the basic plant tissue types, such as xylem (moves water) and phloem (moves sugars.) There are a few other types we haven’t looked at yet, and one of these is collenchyma. The primary function of collenchyma cells is to provide structural support for the plant. These cells have thick, tough, lignin-rich walls that are extra thick at their corners, so that many of them fit together firmly, like bricks in a wall. Obviously collenchyma cells are present in wood, but their also present in non-woody tissues that need a little stiffening, like leaf-stalks.

But the wood of Limber Pine is different. Its collenchyma cells occur in long, thin bands, and are elongated, thin-walled, and lignin-poor. The cells occur in strands throughout the wood rather than as a solid cylinder in the middle of the stem, as is typical in woody plants. This allows them provide support, while leaving the wood flexible. 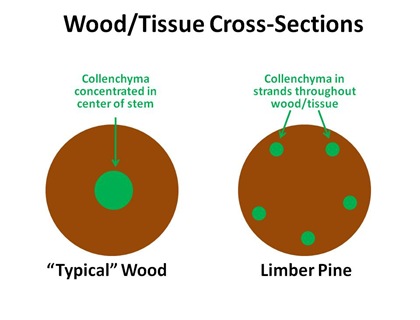 Limber Pines area small minority of PLTs in the Wasatch, but they’re easy to recognize. They typically occur on exposed ridgelines or by rocky outcrops. From a distance they’re distinctly bushy-looking compared to the surrounding spires of spruce and fir, and close-up they’re the only conifer in the Wasatch with needles in bunches of 5. They’re accessible in all of Big/Little Cottonwood ski areas. Next time you come across one, try tying a twig in a knot.

Love the blog. I grew up exploring many of the same places you describe. Your level of detail helps bring back many fond memories. You also make me wish I had paid more attention.

By the way you can watch all the old McGyver episodes at cbs.com

Nice Chemistry content and Thanks for YOUR patience on a powder day.

Rob- glad you're enjoying the blog. And thanks for the MacGyver pointer; that's great stuff for me to watch while spinning on the trainer.

Colin- when I dug up that beta acetal bit I thought, "I gotta put this in- Colin would totally dig it." (So would OCR if he ever read this thing!)

You mention the huge Douglas Fir cones. We're having a banner year for Douglas Fir cones also, and we've had big flocks of Red Crossbills moving in to take advantage of them. I blogged about it yesterday.

Are you seeing lots of Crossbills also? Based on their distribution map, it looks like these nomadic birds do visit your area.

KB- No, I haven’t seen any Red Crossbills. From the Cornell “All About Birds” range map, it looks as though they’re summer-only in the Wasatch. But then I should say that most of my winter bird- watching is down in my back yard in the valley, well below the Douglas Fir. This time of year I’m mainly in Douglas Fir when I backcountry ski, usually on the weekend, or super-early before work. I’ll check with Bird Whisperer though, and see if he’s seen any.

BTW, love your blog. I lived in Evergreen back in Life 1.0, and I’m sure mtn biked many of the same trails as you regularly.

But obviously fungi can break those beta-acetal bonds. How are they managing that?

Doug/Claudia(?)- Many fungi also produce cellulase enzymes capable of breaking the beta acetals in cellulose. Some protozoans do as well. You can find some basic info here.

Loved this post, since I have been researching pines to find a nice one to try in my yard. Limber pine sounds fabulously perfect---especially since I am in Florida, and the more "flexible without snapping" the tree, the better!!! Haha. Now I just have to hope they are "legal" here besides...