Obsession and the Dark Side of Juniper

Berry-Go-Round Note: If you have a last minute BGR submission, send it today to adventurebotanist@yahoo.com. (I think the submission form routing turned off last night.)

So finally, this weekend, the inversion ended. I realize now that there’s one more aspect of an inversion I forgot to mention in my earlier post: After a few days of it, people start getting cranky. And so in Salt Lake the day or two after an inversion ends, everyone seems to be just a little bit more at ease, a little bit nicer to each other, and a little more relaxed, like they can finally stop holding their breath. Which of course is sort of the case… And the timing’s good, because this is the last of this Inversion-Juniper series of posts, and I’ve been reading, writing and thinking so much about Junipers (pic left = Junipers, Sagebrush & Cheatgrass West of Cedar Mtns) this last week I want to wrap it up before it becomes an obsession.

Tangent: Speaking of obsession…So about a month ago, I mentioned Bird Whisperer’s obsession with sharks. I wrote then that he’d probably continue to be fascinated with sharks for another month or so before dropping the subject completely and moving on to something else. Sure enough, he announced last week (again in the hot tub, where we seem to have so many of these types of discussions) that he was done with sharks. And so the Cycle of Obsession continues…

Though I love to roll my eyes at the “Cycle”, I know where he gets it from. It’s not Awesome Wife (pic right at dawn in San Rafael Swell w/Junipers), who is perpetually balanced, steady and even-keeled in her approach to the world; it’s from me. And so when I start on these multi-post series- PLTs, St. George Botany, Great Basin Hydrology, Weeds, Moose, Hybrid Oaks, Dandelions- I always have to be careful not to spiral into topical obsession.

So what’s Bird Whisperer’s new obsession, you ask? He’s back to dinosaurs. Over the past 2-3 years, in between obsessions, he returns to obsessing about dinosaurs for about a month or two before shooting off on the next obsession. (“Dad, what’s your favorite Jurassic carnivore?”) Dinosaurs are like his baseline, his foundation layer, from where he pauses, reorients himself, and sets his sights anew.

So after going on and marveling about the toughness, architecture, distribution and amazing evolutionary path of Juniper, I want to talk about its darker side in the American West: its role in the destruction of the Intermountain grasslands.

It seems like in these days of climate doom-and-gloom, there’s bad news for trees at every turn: clear-cutting of the Amazon basin, destruction of old-growth Redwoods, fungal attacks on Elms, devastation of Hemlocks by exotic insects, and the near-complete replacement of native forests from Scandinavia to the American Southeast with monoculture plantation/wood factories. But this isn’t the story of Utah Juniper- or its cousins, the closely-related Western Juniper, J. occidentalis, Oneseed Juniper, J. monosperma, and Rocky Mountain Juniper, J. monticola- at all. Junipers in the West are expanding their range, and have been doing so consistently for about a century.

For a lot of posts I come up with goofy graphics to illustrate points, but for this post I don’t have to. Spaced through this post are 3 pairs of photos, each with a “before” shot on the left, and an “after” on the right. In each case you can easily see the significant increase in Juniper.

The expansion of range has been dramatic. In Eastern Oregon it’s estimated that Western Juniper now covers 5 times the area it did at the time of European settlement. As Junipers increase their range, they’re also increasing their density, changing their habitat from open, grassy savannah to a largely closed canopy, which in turn largely shuts out shade-intolerant native grasses, such as Indian Rice Grass.

The 2 factors at work are overgrazing and fire suppression. Pre-settlement, dense native grasses prevented Juniper seedlings from gaining a toehold in many areas, particularly areas with better soil, favorable to grasses. And every 30-70 years or so, the grasslands burned, taking many/any young Junipers with them. As a result, Junipers tended to do better on or around rocky hills and outcrops, where there wasn’t such stiff competition from grasses, and where the lower density of such grasses mitigated the intensity of fires.

Tangent: Without fire control, the frequency of natural fires is far greater in such areas today, and the reason is Cheatgrass, Bromus tectorum,(pic right, West of Cedar Mtns)

the exotic wild grass I mentioned in the previous post. Cheatgrass does its growing earlier than native grasses, and by June is already brown and dry, creating a dangerous summer-long fuel-load not produced by native grasses.

Within 10-15 years of settlement, Great Basin grass cover had been sharply reduced, and the composition of such grasslands shifted dramatically from grasses to shrubs, such as Sagebrush.

Tangent: Sagebrush produces chemicals called terpenoids that make its foliage largely unpalatable to domestic livestock, which enables it to replace grasses in overgrazed areas. For more about terpenoids and Sagebrush, see this post.

Juniper seedlings are much better able to get a decent start in the spaces between shrubs than on grass-covered soil, and soon were able to start growing in areas from which they’d been barred for millennia. A century or so of fire suppression has allowed the seedlings to grow into adulthood for between 3 and 4 Juniper-generations (each =~30 years), facilitating the change you see in the photo-pairs. 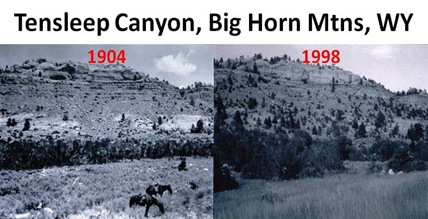 When I first heard of the phenomenon of Juniper “Invasion”, I thought, “So what?” Other than ranchers, who cares? Juniper and Piñon-Juniper woodlands are some of the most pleasant places (and best campsites) in the Intermountain West, with their combination of shade and open-ness. If the “invasion” means more shade and a few less places for cattle to trash, isn’t that a good thing?

But the expansion of Juniper is really part of a bigger story: the destruction of the Intermountain grasslands. Years ago, before I was even interested in plants, I read a factoid that has stuck with me for almost 2 decades: prior to European settlement, ¾ of the Great Basin was grassland. Not just shrubs, but grass, native grasses like Galleta Grass, Pleuraphis rigida and Indian Rice Grass, Oryzopsis hymenoides, grasses that stay green into early summer (unlike Cheatgrass.) Think about that, and think of what it would be like to drive across Nevada in May, if basin after basin were covered with carpets of green grasses. Even for a tree-lover like me, that’s a vision so sweet it has to make your heart ache just a little.

The loss of grasslands is a loss to bird-lovers as well. As the canopy closes overhead, ground-nesters like the Western Meadowlark are displaced in favor of tree-nesters: Jays, Solitaires, Bushtits, Mourning Doves. (The Western Meadowlark is my absolute favorite bird. In the dark and cold of winter I long to hear its song again, the prettiest sound in Utah, ever.)

To be sure, Junipers are just a small part of the destruction; overgrazing, exotic species and fire suppression are the real villains. But I can’t help but feel that the more I learn about the natural world, the more it seems like every change involves a loss of some sort. What I can’t tell is whether it seems that way because I understand things better, or because I’m getting older.

I'm glad that you mentioned your observation that people get a little crazy before and during an inversion. I've noticed the same thing. It's become a joke in our house that inversions are to mountain people like full moons are to the rest of the world.

I love the before and after photos. Wow, you must be really old if you were around to take a photo in 1899!