Another quick break from Bird Feeder Week. This post covers 2 things. First is about the Earth’s orbit and the New Year. Second is about a dream I had. The astro part is the important part; other than being related to the New Year, the dream doesn’t have much to do with anything, so you can blow that part off if you want. I mainly just wanted to write it down while it was fresh in my mind.

I always feel that the New Year starts at the wrong time. There’s nothing special about January 1st. It’s not a solstice, or an equinox, or even a special position on the Earth’s orbital path. It’s just a day in Winter. You stay up late, you watch Dick Clarke, you go to sleep, and you wake up, but there’s nothing “new” going on. It’s cold and gray, and there’s old snow on the ground.

I used to think the New Year should start on the Spring Equinox. That’s a time when everything’s teed up; things are about to germinate or bloom or wake up or fly North, and in fact that’s right when I started this blog last year. You could also make a case for the year starting at the Winter Solstice: The Sun’s bottomed out, the days start getting longer, and even though months of Winter loom ahead, everybody can see that the Sun is leading us in the right direction again.

But the problem with a solstice or equinox-based year is that it’s extremely North-o-centric. After all, on the dates I just mentioned, the exact opposite things are happening down in Australia and Argentina and South Africa and the Kerguelen Islands*.

*Kerguelen Islands = piece of land on Earth that is the absolute farthest from Salt Lake City.

And because of that bias, I feel the year should be based not on axial tilt, but on orbital position. At first blush a year based on orbital position may sound rather arbitrary- after all, isn’t any point on a circle the same as another? But Earth’s orbit is not a circle; it’s an ellipse, which means that sometimes it’s closer to the Sun than others. And the reason I bring this up now is because today, January 4, 2009, is the Earth’s perihelion, or closest position to the Sun over its year-long orbit.

For at least a couple of thousand years, most Europeans believed the Sun orbited the Earth. In the 16th century, Copernicus proposed that the Earth actually orbited the Sun, and as a result we tend to credit Copernicus for “figuring it out.” But the truth is that the new heliocentric model posited by Copernicus didn’t do all that much better a job of describing the motions of the Sun and planets and moons that the old model, and so he- and others- introduced various “fudging” motions, called “epicycles”, to explain the observed behavior of celestial objects.

The guy who really “figured it out” was Johann Kepler, who did 2 things. First, he figured out that the orbits of most everything in the solar system are not circular; they’re elliptical. And second, he developed 3 mathematical laws that describe the behavior of objects in elliptical orbits. 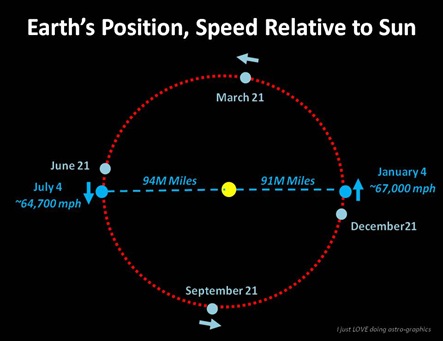 The Earth’s orbit has an eccentricity of about .017, which isn’t terribly elliptical, but certainly isn’t a perfect circle. Right now the Earth is about 91 million miles from the Sun, and on July 4- its farthest point, or aphelion- it’ll be 94 million miles away. That’s a difference of roughly 3.5%. By way of comparison the orbit of the moon around the Earth is about 3 times more eccentric than our orbit around the Sun.

Tangent: The only object in the solar system with an apparently perfectly circular orbit is Triton, Neptune’s largest moon. Triton is also unusual in that it has a “retrograde”, or clockwise, orbit. Most everything in the Solar System orbits around everything else in a counter-clockwise direction. But a few moons orbit their planets the “wrong” way or clockwise. It’s thought that such moons did not form out of the same accretion disks as the planets they orbit, but rather were gravitationally “captured” by them. In the case of Triton, it’s very similar in size and composition to Pluto, and so is suspected to have been a similar “dwarf planet” in that same area of the solar system- what’s called the “Kuiper Belt”- before being captured by Neptune.

Kepler’s 2nd law explains that elliptically orbiting objects move faster when they’re closer to the object they’re orbiting around, and so today the Earth is moving as fast as it ever moves around the Sun- about 67,000 mph. After today we’ll start slowing down until July 4, when we “bottom out” at a leisurely 64,700 mph, give or take…

So today is my New Year’s Day. Wherever you are, whatever your deal is, I hope it’s a good year for you and the people you care about, and filled with glimpses of the Beauty of the World.

Yesterday morning I slept in late and remembered my dream, both unusual events for me. I dreamt I was in the back yard of the house I grew up in, near Boston. It was winter and the ground was covered with snow. I was trying to fix some weird backpack/baby carrier that had several interconnecting latches that were difficult to fit together. Many of the dreams I do remember are of trying to accomplish frustrating mechanical tasks. In these dreams- which often involve bikes, cars, motorcycles, or even guns (weird, because I’ve never owned a gun)- things never seem to fit together, or I’m missing a part, or the thing just won’t work right, and I awake frustrated and annoyed. But in this dream, all at once I saw the connection I needed to make and everything just snapped perfectly into place, and the strange contraption was complete, intact, and felt wonderfully solid. Pleased with myself, I looked up and noticed a spot on the ground a few feet away that I hadn’t noticed a moment before. It was a bare patch, free of snow, and the grass was just starting to turn green, and there was a bumblebee buzzing down just above the blades. The bee was beautiful, with black, yellow and orange hairs, and it seemed as detailed and clear as anything I ever remember seeing in a dream. I woke up.

I don’t pretend to interpret or find meaning in dreams, but this one felt great.

PS-Tangent: Unfortunately, the positive dream streak didn’t last. Last night I had a “traditional” mechanical task-type dream in which everything went wrong. I won’t bore you with the details, but for any mtn bikers reading I’ll just say that it involved tubeless tires and sealant. Lots of sealant.

I enjoyed your summary of the Earth's orbit. I agree, New Year should be perihelion, even with anomalistic precession (http://en.wikipedia.org/wiki/Precession_(astronomy)#Anomalistic_precession).

That's cool you had a dream resolve.

I've had nightmares about sealant too, and I've usually been awake. :-)